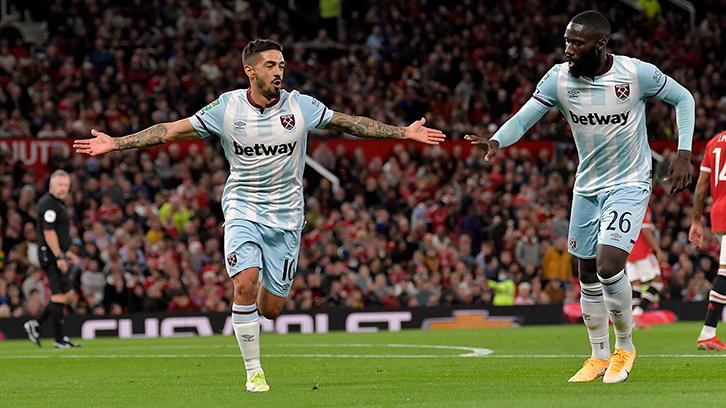 West Ham United produced an outstanding counter-attacking display to progress to the Carabao Cup fourth round with a 1-0 win over Manchester United at Old Trafford.

A much-changed Irons team were staunch in their defending, diligent in their shape and – when it ultimately mattered, in the ninth minute – decisive with their finishing, Manuel Lanzini firing home the winner after being picked out by Ryan Fredericks.

The Red Devils attempted to mount the pressure in the second half but were largely restricted to efforts from range, with West Ham centre-backs Craig Dawson and Issa Diop particularly impressive in their consistent repelling of balls into the box.

The Irons even had chances to close out the game on the counter-attack in injury time, but Andriy Yarmolenko struck the post from close range and Mark Noble saw an effort saved by Dean Henderson after running clean in on goal.

Nevertheless, the result saw West Ham claim a measure of revenge for their Premier League loss to the same opponents three days prior, Lanzini's goal sealing the Irons' first win at Old Trafford since May 2007.

Manager David Moyes had made ten changes to the West Ham side defeated on Sunday, with the trip to Old Trafford marking summer signings Alphonse Areola's and Alex Král’s first appearances in Claret and Blue.

Having recovered from injury and featured as a substitute in the UEFA Europa League win over Dinamo Zagreb last week, full-back Arthur Masuaku was making his first start since April, with Ben Johnson, Noble and Yarmolenko also starting for the first time this season.

Manchester United manager Ole Gunnar Solskjaer had made eleven changes himself, but it was the Hammers who started the game much the brighter of the two teams, spearheaded by the hard work of Jarrod Bowen up front.

Indeed, it was the No20 who had the opening opportunity of the game after three minutes. Yarmolenko outmuscled Manchester United full-back Alex Telles near the byline and picked out Bowen inside the area, but the forward scuffed his finish wide of Dean Henderson's near post when well-placed.

It was a warning the hosts did not heed as the Irons built on that early momentum. Four minutes later, a deflected Yarmolenko shot looped through to midfielder Král, the debutant having found a pocket of space inside Manchester United’s box. Striking across goal on his weaker left foot, however, the shot hit Eric Bailly’s thigh and cleared the crossbar.

Third time was to prove the charm.

From a standing start, Fredericks burst past Telles, reached the byline and pulled the ball back for Manuel Lanzini. The midfielder had space and time to arrow an accurate finish across Henderson and into the bottom corner, granting his team a deserved early lead.

Sadly, in creating the goal, Fredericks slipped down the side of the elevated Old Trafford turf and, injured in that action, subsequently needed to be replaced by Vladimír Coufal.

The goal jolted Manchester United into a response, with Jesse Lingard claiming for a penalty moments before Diogo Dalot saw a low cross well cut out by Noble.

From Juan Mata's resulting corner, Areola punched the ball back to the Spaniard – spotting the West Ham ‘stopper off his line in anticipation of a second cross – called his bluff and curled high towards the near post. Back-pedalling, the Frenchman, otherwise imperious on his debut, could not reach the volleyed effort, but was spared by his crossbar.

Anthony Martial then spurned a glorious opportunity to equalise after being slipped in by Nemanja Matic, the Frenchman rolling his effort across the face of goal from inside the six-yard box.

After an electrifying start from both teams, the pattern of the game settled, West Ham content to allow Manchester United possession around the halfway line, but quick to crowd the Red Devils whenever they threatened to progress from there.

The Irons’ low block reduced the hosts to shooting from range, with Donny van de Beek twice shooting wide and Lingard having one dipping 25-yard effort well dealt with by Areola.

Bowen thought he might be in for the Hammers’ second moments before half-time, but the forward was judged to be offside as he stretched to reach Coufal’s volleyed pull-back.

Despite Manchester United having triple their opponents’ shot count at the interval, it was Moyes’ West Ham side who had been more decisive with the ball – a theme which also pervaded the second half.

In the opening stages after the restart, Jadon Sancho cleared the crossbar with a volleyed effort before Diogo Dalot shot across goal, but the excellent defensive shape of the boys in Claret and Blue meant that speculative efforts from distance were about as close as the Red Devils would come.

Mason Greenwood's introduction with half-an-hour remaining initially posed problems as the Manchester United forward ran in behind Diop and sliced a low shot across Areola – but the Frenchman produced a stunning save with his foot to maintain his side’s advantage.

The Frenchman then denied the same player with a more comfortable save from distance, before Diop – brilliantly positioned and committed throughout – denied Lingard the opportunity to shoot from 25 yards with a brave block.

The pattern of the game was perhaps best personified by a move 15 minutes from time in which Sancho cut in from the left flank to shoot, only to be crowded out by a combination of Coufal, Dawson and Noble – the Claret and Blue low block formidable throughout.

And as the clock began to run down, West Ham enjoyed three clear opportunities to extend their lead, the first being the best when Noble – winning a fifty-fifty in midfield with Bruno Fernandes – prodded the ball over the top for Yarmolenko to chase. The Ukrainian rounded Henderson successfully, but could only steer his effort onto the base of the post.

Noble was the next to go close as the tireless Bowen teed him up one-on-one with Henderson, but having run the full length of the pitch to join his colleague, the captain’s effort lacked the power required to beat the Red Devils’ ‘keeper.

Bowen then had another near-post drive denied by Henderson, who seconds later sprinted forwards for one last Manchester United corner, but in the end it was Lanzini’s early goal – followed by a fantastic team effort to deny their hosts – that sealed the Hammers’ progression to the next round, much to the delight of the travelling Claret and Blue Army.