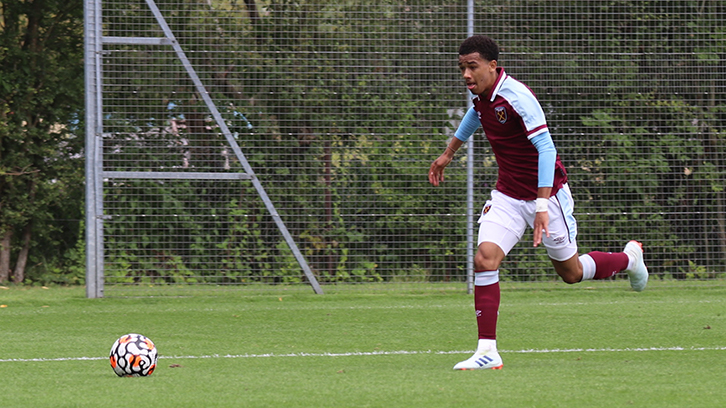 West Ham United U18s were unfortunate to fall to a late 2-1 defeat against Arsenal U18s in their opening game of the 2021/22 Premier League Cup.

Instigated to give U18s teams experience of knockout cup football, the Premier League Cup is split into six groups of four teams, with clubs playing each other once in the group stage, either home or away, with the six group winners and two best runners-up qualifying.

West Ham’s opening game against Arsenal, played on Saturday, will be followed by away trips to Everton and Burnley in October and November respectively.

The Hammers’ youth team went into the game against Arsenal off the back of an excellent display in the 3-1 win over Leicester City last weekend, with lead coach Kevin Keen subsequently naming an unchanged starting eleven at Little Heath Sports Ground on Saturday.

Despite having the better of the play, the young Irons could not find a breakthrough to match their first-half display, with the two teams going in goalless at the break.

Within the opening ten minutes of the second half, Arsenal took the lead, Khadon Edwards in prolific form slotting home after being picked out by Marcelo Flores.

The Hammers did enjoy the welcome sight of Divin Mubama – a prolific England youth striker who had been injured the week before the season began in earnest – making his first competitive appearance of the campaign after coming on in the 55th minute.

But they also suffered a setback when U16s full-back Olli Scarles – on as a substitute for Regan Clayton shortly after the goal – sustained a heavy challenge which forced him to depart the field, leaving West Ham to play the final quarter of the game with ten men after Gideon Kodua had been substituted moments prior.

Yet fight back they did, dominating possession and chances despite their numerical disparity.

They appeared to have got their reward when a long ball over the top picked out Mubama, who was fouled when running in on goal. The first-year scholar duly picked himself up, dusted himself down – and buried the penalty kick for his first goal of the campaign.

Despite West Ham continuing to push in the final ten minutes, however, they were ultimately caught on the break, Charles Sagoe Junior burying a fine finish into the bottom corner with a minute left on the clock to give Arsenal the win.

The Hammers did have a late effort cleared off the line with the last kick of the game, but it was the visitors who began their Premier League Cup campaign with three points in east London.

“We were slightly unfortunate to lose it – we probably had more efforts at goal – but we came out on the wrong side of the scoreline.

“It was really unfortunate because the lads had worked so hard, especially with ten men, to stay in the game. We were the ones pushing to win it, so I’m a little disappointed.”

Keen was, however, pleased to welcome Mubama back into the fold after a month’s absence with injury.

With Divin getting to play 30 minutes, and scoring on his first appearance of the season, hopefully that only bodes really well for the future

“It’s really big for us,” he confirmed. “Sonny Perkins and George Earthy and Gideon Kodua are not really what you would call strikers, they’re No10s, but they stepped up in Divin’s absence and did really well.

“With Divin getting to play 30 minutes, and scoring on his first appearance of the season, hopefully that only bodes really well for the future. Hopefully we’ll lose him again in the few months’ time because he’s kicking on even further with the U23s, which is what we’re really about.”

Keen was also pleased to see Perkins make his development squad debut in the U21s’ 2-1 win over Ipswich Town at Portman Road on Tuesday evening.

“I feel like the group that I’ve got this year, in terms of their character and commitment, is the best group I’ve had since I came back,” Keen confirmed.

“Sonny’s been outstanding. He came on and did very well the other night. There are good, keen, good footballers coming through the system.

“The Academy Manager, Ricky Martin, is doing a fantastic job and hopefully we’ll see more of them come through and play at London Stadium one day.”

The youth team’s next test is a return to U18 Premier League South action, with matches against Tottenham Hotspur and Chelsea completing a back-to-back trio of London derbies.

“They’re always fantastic games,” Keen noted. “Being a London derby put a little bit of an edge on it against Arsenal.

“We’ve got Tottenham next Saturday, and then Chelsea the following weekend, so they’re fantastic games for these boys to play in.

“Obviously the lads know a lot of their players, so it has that little bit extra edge. I’ve no doubt that they’ll represent the Club really well.”