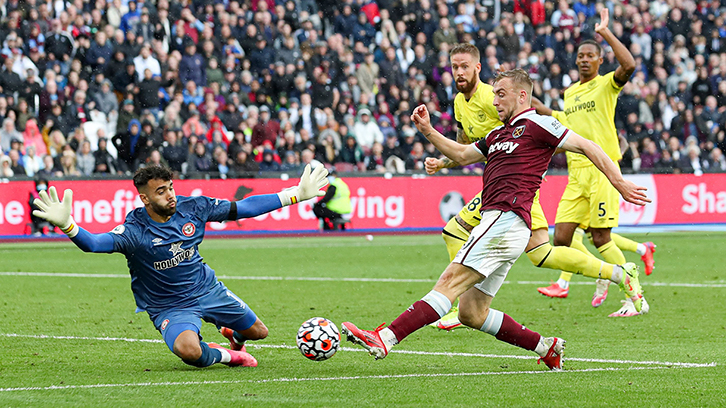 Brentford’s Yoane Wissa scored with virtually the last kick of the game to inflict an unfortunate 2-1 defeat on West Ham United at London Stadium.

A fiercely contested London derby – the first-ever top-flight meeting between these two sides, and their first competitive fixture since April 1993 – saw the visitors start the brighter and open the scoring with a quarter of the game gone, Bryan Mbeumo sliding in after Lukasz Fabianski had tipped Sergi Canos’ initial effort away from goal.

West Ham grew into the game, however, and after missing a series of clear opportunities at the start of the second half, deservedly equalised when Jarrod Bowen slammed home a crisp low volley with ten minutes to go.

There only looked to be one winner from thereon out, but a late lapse of concentration saw Wissa slam home a bouncing volley in the fourth minute of injury time after Fabianski saved a header from Pontus Jansson – the last kick of the game snatching all three points for Brentford.

West Ham had made seven changes to the team which defeated Rapid Vienna in the UEFA Europa League in midweek, with Vladimír Coufal returning to the side after missing out on Thursday with a knock.

Premier League newcomers Brentford, meanwhile, came into the game off the back of an impressive 3-3 draw with Liverpool, having previously recorded impressive wins over Arsenal and Wolverhampton Wanderers in their opening six Premier League games.

It was that sense of adventure which saw the Bees make the brighter start of the two teams. Having won the first corner of the game, Declan Rice and Aaron Cresswell were forced to make smart blocks before the ball sat up invitingly for Mbeumo to strike first-time. The French forward’s first-time effort clipped the top of the crossbar on the way over.

Those two early chances for the visitors saw another vocal West Ham home crowd respond with a wall of noise in support of their side, and Bowen subsequently came close when he deflected Michail Antonio’s chest-height cross onto the post – but the ball had already drifted out of play.

In truth, however, the better of the early chances continued to fall Brentford’s way, Ivan Toney latching onto Ethan Pinnock’s flick on and volleying goalwards, forcing a smart save from Lukasz Fabianski low down to his right after ten minutes.

West Ham’s clearest sight of goal in the first half fell to the returning Kurt Zouma on the quarter-of-an-hour mark. Attacking a Cresswell corner kick, the Frenchman did well to rise higher than two Brentford defenders, but headed the ball narrowly wide of the post and into the side-netting.

But just as the Irons began to turn up the pressure on their visitors – Pablo Fornals and Antonio both seeing long-distance efforts blocked – Brentford found their breakthrough.

Toney played a smart through-ball into the path of Canos, whose shot across goal required a fine save from Fabianski, only for Mbeumo to follow in and – with his third clear chance of the game – finally convert, albeit only narrowly making it over the line.

That goal did spark the Hammers into life and, through successful high pressing, Bowen had a penalty shout turned down, before Said Benrahma – against his former club – twice went close with efforts from the edge of the box.

West Ham picked up where they left off in the opening stages of second half, Benrahma having a superb 30-yard free-kick tipped over the bar by goalkeeper David Raya moments before Bowen – played through by the Algerian – saw his rising finish smothered by the Spanish goalkeeper.

Tomas Souček was the next to go close for Moyes’ men with an angled header over the bar, and Bowen flicked a Coufal near-post delivery wide of the far post, as West Ham continued to mount attack upon attack on the sitting Brentford defence.

The noise inside London Stadium continued to increase as Fornals saw a volleyed effort blocked athletically by Pinnock before Coufal – still in search of his first goal in Claret and Blue – smashed the rebound low across goal, but Raya deflected it wide of the near post.

Just as it seemed like the goal was never going to come, finally West Ham converted one of the many set pieces they had come close from.

Rice made first contact with Cresswell's near-post corner, flicking on. Pinnock managed to beat Souček to the ball at the back post, but could only head out as far as Bowen who, from the corner of the area, drilled a clean, crisp, low half-volley into the bottom corner.

But it was Wissa who would steal the show. A free-kick in the fourth minute of added time found Jansson at the far post and, after the Brentford captain’s header was initially saved by Fabianski, Wissa smashed a volley into the ground and – amidst a sea of bodies – past the Poland international.

There was no time left in which to respond when play resumed, Brentford condemning the unfortunate West Ham to back-to-back home defeats in the Premier League.