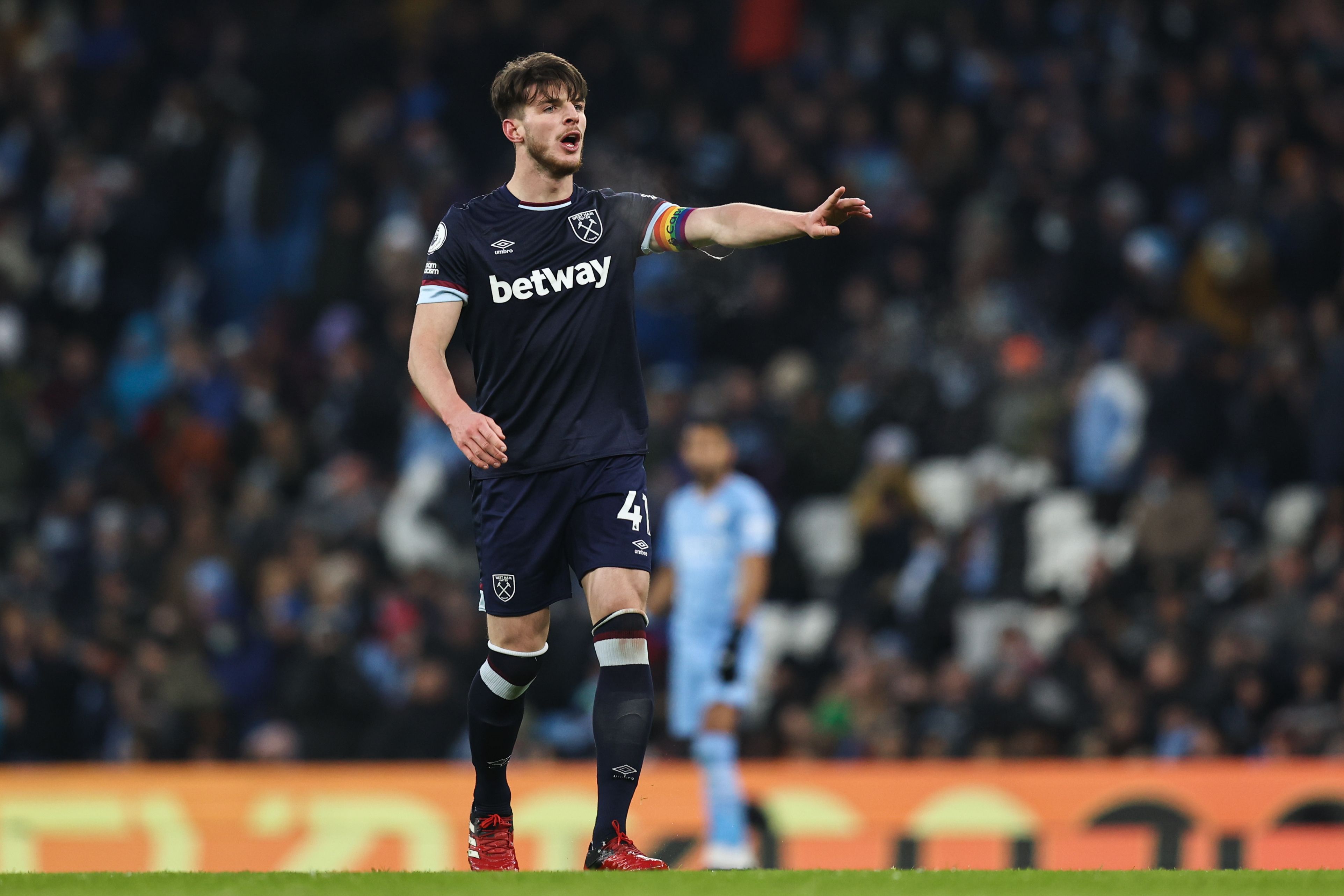 Declan Rice: It’s just about putting the ball in the back of the net

The Hammers won six out of seven matches in all competitions in that period, defeating Everton, Tottenham Hotspur, Aston Villa and Liverpool in the Premier League to rise into the top four.

However, since returning to action a week ago, the Irons have lost successive top-flight games for the first time since mid-April, going down 1-0 at Wolverhampton Wanderers and 2-1 at Manchester City.

Both defeats were narrow and hard fought, and captain Rice feels West Ham could have snatched something from both games with more composed play and better finishing in the final third.

The Londoners remain fourth, and the England international is backing his team to bounce back when they host Brighton & Hove Albion at London Stadium on Wednesday evening – the first of seven Premier League matches in December.

What did you make of today’s game at Manchester City, Dec?

“It was frustrating and I’m disappointed but that’s because we didn’t put the ball in the back of the net. We’ve been here before and I’ve spoken to you before and it’s been after a humiliating defeat, so it shows how far we’ve come as a team that we played really well in the first half in some stages, then in the second half we did well, but it’s just about putting the ball in the back of the net at the moment and we haven’t quite done that in the last two Premier League games and we need to get back to that.”

You mentioned in another interview that the November international break came at a bad time in that it stalled the momentum we had worked up in winning six out of seven matches?

“That’s the problem with these international breaks! We had gone seven in a row without defeat and we were really cooking and we really felt like we could give anyone a game at any time and beat them, then obviously the break happens and everyone goes away and it takes time to get back into it, you know.

“There are no excuses. It’s two defeats in a row [in the Premier League] for the first time since April, so we need to get back to it and I think we can, starting on Wednesday.”

When you face Manchester City, unlike any other team, is it difficult to maintain focus when in possession because if you lose the ball, you might not see it again for a minute or more?

“That’s why they are the best team in the country, the way they do everything. Even when Lukasz has got the ball, they pressure you and they’re always so organised and make it so hard for you to get the ball.

“With England, most of the time you’re dominating the ball and dominating the game and when you play against City, they are doing things that really cause you problems in the mind. They do some really good stuff and make it hard for you as players.”

Did the heavy snow actually make things harder for us to play our quick, counter-attacking style, particularly in the 15 to 20 minutes before half-time, during which City scored their opening goal?

“I think, before the game, we were warming up and the snow was getting stuck to the ball and we had to put a bit more pace on it. It was forecast to stop but, as the first half went on, it got really bad and you couldn’t see a thing and we did well to stay at 1-0, really.

“When it was light snow at the start, we created some really good chances and when you look back, you think: ‘Could we have done a bit more?’.

“The snow was awful today but, look, we’re Premier League footballers and we’ve got to adapt and a lot of people on Saturdays and Sundays play in snow all the time, so there’s no complaints here!”

So, we host Brighton next on Wednesday night and we’re due a first win over them in the Premier League. That said, watching them against Leeds, they play some lovely football and create chances, so it won’t be easy?

“I think they’re top-class, Brighton. You can see the way Graham Potter has them playing, they really pass the ball well with a lot of movement and a lot of forward runs. We know what we’re up against and we know it’s going to be a tough game.

“We’ve had two defeats now and we really need to win the game on Wednesday. We’re still in the top four, but we don’t want to be in the top four because we’ve won the points before. We want to build on that.

“We’ve got the squad to and the players to, but we just need to go out there and do it because it’s down to us at the end of the day.”

The travelling fans had another difficult weekend on the roads and railways, but it was virtually full in the away end again and they kept singing all afternoon, as usual…

“I feel like, with West Ham, if they’d said we were playing today’s game in Scotland, they’d have been there, all 3,000 of them!

“I feel like they’ve had some tough luck recently with the trains. I think there were some problems at Aston Villa and it was obviously difficult for them to get up there and here, but they want to see the team they love go out and perform and we really appreciate it as players.

“You know what my relationship is like with the fans, I really love them and everything they do for me. Hearing them sing my name, it really does give me the confidence to go and play and it’s the same for the team as well. They’re a top bunch of people.”