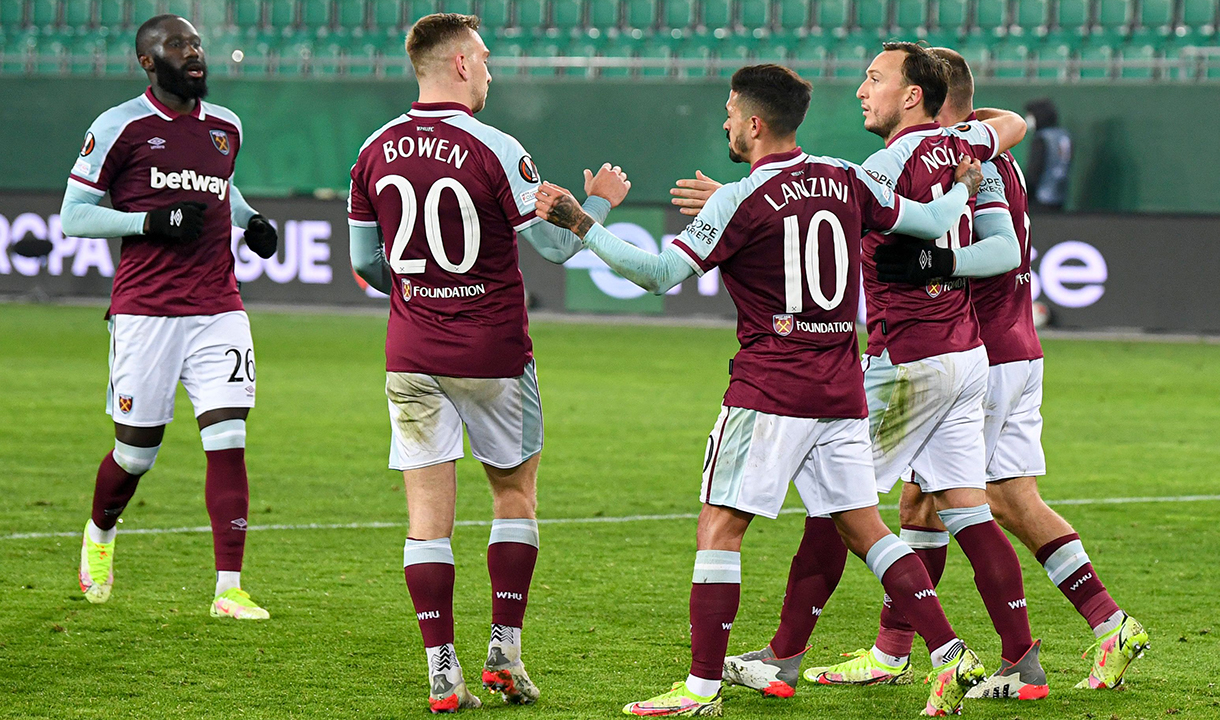 West Ham United delivered another excellent away performance to secure top spot in their first-ever UEFA Europa League group stage campaign, seeing off the challenge of Rapid Vienna in a comfortable 2-0 win in Austria.

In a behind-closed-doors match played in freezingly cold conditions at Allianz Stadion, David Moyes’ Irons dominated the ball, aware that a victory would see them secure first place in Group H and – with it – direct progression to the competition’s Round of 16, avoiding a play-off round fixture against a club dropping out of the UEFA Champions League.

A cagey game was opened up five minutes before the half-time whistle when Nikola Vlašić – lively throughout – supplied a delightful high cross which Andriy Yarmolenko rose high to head home from close range for the Ukrainian's first goal of the season.

And the points were all but sealed in first-half stoppage time when Yarmolenko’s quick thinking won his side a penalty kick which captain Mark Noble stepped up to guide home with typical precision.

Chances continued to flow West Ham’s way in the second half, but the 45 minutes were by-and-large comfortable for the east London side, their job in the group stages by that point fulfilled.

With West Ham desiring a win, and their hosts realistically requiring one in order to progress, it was perhaps no surprise that both sides made a bright start in the chilly conditions – albeit in the surreal surroundings of an empty stadium once more, due to COVID-19 restrictions imposed by the Austrian government.

After an exchange of early corner kicks, Jarrod Bowen, chosen to lead the line with Michail Antonio rested, carried the Hammers’ principal threat in the opening stages.

Linking up well with Arthur Masuaku – who was seeing plenty of space in which to bomb on from left-back – Bowen first slid in to get a touch to a low delivery, the ball flashing narrowly wide of the far post, before seconds later having an effort blocked from a similar set-up.

The Irons were enjoying plenty of possession without too much by way of penetration, although Vlašić was next to go close. Working the ball well from left to right, Yarmolenko and Manuel Lanzini combined to afford the Croatian time to turn and shoot from the edge of the box, but the No11’s effort flew a few yards over the bar.

Rapid did eventually offer some threat inside the opening 20 minutes, Taxiarchis Fountas forcing Issa Diop into a decent block inside the area before the Greek forward saw a first-time shot whistle just inches over Alphonse Areola’s bar.

Immediately up the other end, Noble teed up Yarmolenko for an effort from a similar position – but, like his counterpart, the No7’s shot was too firmly struck to stay on target.

The tempo of the game noticeably dropped off after that point, but West Ham did continue to enjoy some measure of the joy down the flanks, Vladimír Coufal firing a fierce cross straight into the gloves of Rapid ‘keeper Paul Gartler after being well found by Vlašić.

Openings proved few and far between for either side in the opening half-an-hour, with Rapid winger Kelvin Arase living up to that billing with a pacey run direct at Craig Dawson. Entering the area, his low shot across goal proved a comfortable enough stop for Areola.

Then, in the five minutes before half-time, the Hammers slipped into another gear and assumed a firm command of the game.

Having looked arguably the most lively of West Ham’s supporting triumvirate, Vlašic registered his first assist in Claret and Blue on 39 minutes, buying half-a-yard on the left flank and crossing high towards the far post when Yarmolenko – yards out and unmarked – rose high to guide home for his opening goal of the season.

And on the stroke of half-time, Yarmolenko gave his team the chance to double their advantage with a clever flick just inside the box which saw his heels clipped out wide by Maximilian Hofmann.

Up to the mark stepped Noble and, with typical composure and quality, the captain found the top-right corner with power and precise placement – the long-serving captain’s first-ever goal in European competition, excluding qualifying.

That extra bit of quality afforded West Ham a lead which reflected their superiority on the ball, and allowed for a relatively comfortable second half in the Austrian capital.

It was quality which continued to flow, with Bowen twice coming close at the culmination of some admirable approach play.

In the first instance, Vlašić – breaking towards the box – threw off his marker which a dropped shoulder and created space for Lanzini to slide in the No20, only for Bowen’s low shot to be blocked by Gartler’s legs.

Recollecting the ball moments later from Lanzini, Bowen then showed outstanding balance and nimble feet to weave past three defenders. Running in on goal, the No20 had a right-footed effort crowded out by the onrushing Rapid keeper in what would have – save for Gartler’s intervention – been a wonder goal.

Having struggled to create clear chances for all their possession in the first half, that did not prove a challenge in the second for West Ham, Rapid the architects of their own downfall on the hour mark with a poor square ball from Filip Stojković.

Yarmolenko picked up the loose pass and, after dropping a shoulder and feigning to shoot on his trusty left foot, slipped in a cute reverse pass to Souček. The midfielder saw his first low finish blocked by Gartler’s legs, but after he headed back across goal, Bowen smashed a volley which – almost unfathomably – stayed out after striking Stojkovic’s chest on the line.

The hosts continued to show plenty of application but lacked the invention West Ham were displaying, and only a last-ditch intervention from Hofmann prevented second-half substitute Pablo Fornals from volleying in from close range after Noble’s dinked cross was only half cleared.

Fountas ought to have reduced the arrears for Rapid with 20 minutes ago, but curled wide of Areola’s upright when well placed.

And seconds later, substitute Said Benrahma had a clear chance to wrap the game up, but – perhaps not spotting Vlašić completely unmarked inside the box – failed to pick out the No11 with a square pass which surely would have resulted in the clincher.

There was still time, with 15 minutes remaining, for another proud moment for the Academy of Football, 17-year-old striker Sonny Perkins – just two months after making his U23s debut at Portman Road – coming on for his first-team and European bow.

And the teenager could have even marked the occasion with a goal, finding plenty of space to meet Ryan Fredericks’ accurate cross but, sadly, seeing his header acrobatically tipped over the bar by Gartler.

Rapid did enjoy one final chance in stoppage time as Ercan Kara’s attempted overhead kick sailed over the bar – but another celebratory night yielded yet another result to be cherished on the road for Moyes’ men, who are certainly making an impression on the continental stage this season.