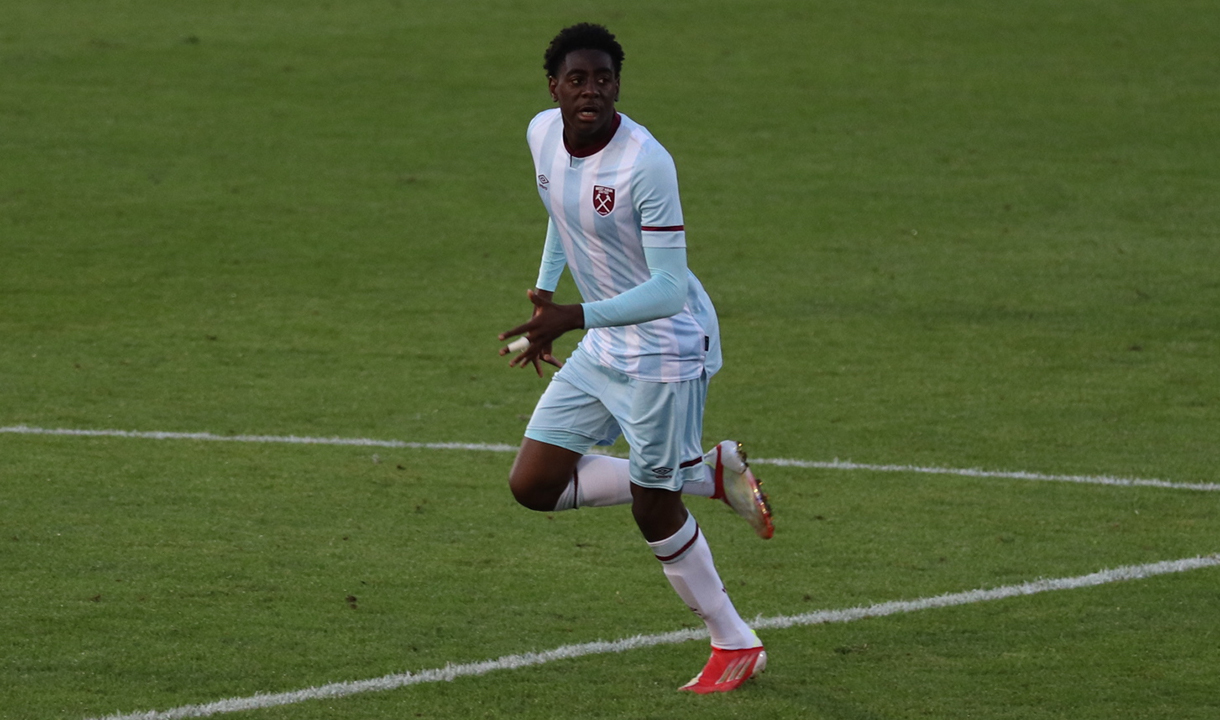 West Ham United U18s pegged back late on at Arsenal

The West Ham youth team stretched their unbeaten run in the league to four games, and remained in the top half of the table, with a 2-2 draw against their title-chasing hosts at Arsenal Training Centre.

Unlucky to lose a two-goal lead late on, West Ham once again demonstrated their undoubted quality in competing with one of youth football’s top outfits, with their recent run including games against last season’s league champions and runners-up, Fulham (a 0-0 home draw) and Chelsea (a 2-1 away win), and last season’s FA Youth Cup winners Aston Villa (a 5-0 home win).

Arsenal got off to a bright start on Saturday morning, seeing an early effort from Khayon Edwards cleared off the line by a West Ham shirt.

Divin Mubama – fresh from scoring his first England U18s goal earlier this month – then fired a warning shot for West Ham as he raced through on goal, only to strike the post.

But the 17-year-old rarely passes up an opportunity twice, and took full advantage of Arsenal conceding possession near their own goal, robbing Taylor Foran of the ball before slotting it past goalkeeper Remy Mitchell.

Five minutes later, the Hammers doubled their lead, Ollie Scarles – fresh from his exploits with England schoolboys – curling in a cross-cum-shot for his first West Ham goal at U18s level.

The second half saw Arsenal pile on plenty of pressure, dominating the ball but struggling to break down the well-organised West Ham shirts which lay before them.

It took a moment of high quality for West Ham’s stern defending to be beaten with 20 minutes to go. After George Earthy appeared to be barged off the ball, Charles Sagoe picked up possession and curled in a high finish from 20 yards.

And with the clock ticking into injury time, Arsenal snatched an equaliser on their home turf, late substitute Billy Vigar looping a header which dropped agonisingly past the despairing dive of Jacob Knightbridge into the top corner.

They worked so hard and went two goals in front against an experienced Arsenal side, so I was really proud of the way the lads played

Nevertheless, as with recent performances, Keen was pleased with the standard of West Ham’s play in North London.

“It was a strange one, because we played really well with a vibrant young team,” the lead coach reflected.

“When you lose a goal to draw away in injury time, you can come away a little bit deflated, but I think, in youth team football, you shouldn’t overlook the way the lads played as a team.

“They worked so hard and went two goals in front against an experienced Arsenal side, so I was really proud of the way the lads played. There were some exceptional displays, just tinged with that sense we should have won it.”

West Ham’s U18s side was once again full of young players including U16s starlets Scarles and Lewis Orford, as well as debutant Ryan Battrum.

Keen explained: “Ryan played the last 15 or 20 minutes for his U18s debut. He’s a lad who’s coming into the group next year, so it was nice for him to get on, especially at a place like Arsenal.

“There were so many positives. That last-minute goal just tinged it a little bit, but it shouldn’t take away from a strong performance.

“It was nice to see Divin on the scoresheet again with a good finish. We created some really good chances, worked so hard defensively and looked good on the ball.

“We’re on an unbeaten run of four games in the league against good teams including Chelsea, Aston Villa and Fulham, so it’s a nice little run, even though we perhaps feel we should have a couple more points on the board from it.”

Keen also reflected on the news earlier this week that West Ham will face Newcastle United – quarter-finalists last season – in the FA Youth Cup third round next month.

He noted: “This season we’ve become a really solid, hard-working team that shows a lot of character and plays some good football.

“It’s looking like hopefully we’ve got a bright future in the competition. It’s a tough draw against another Category One Academy, Newcastle, so it’s not going to be easy for sure. We’ve got a few games before that, but the Academy is in a good place at the moment.

"You’ve got U18s players all playing in the U23s – Sonny Perkins, Freddie Potts, Jamal Baptiste – so there are plenty of positives with what we’re doing at the Academy.”