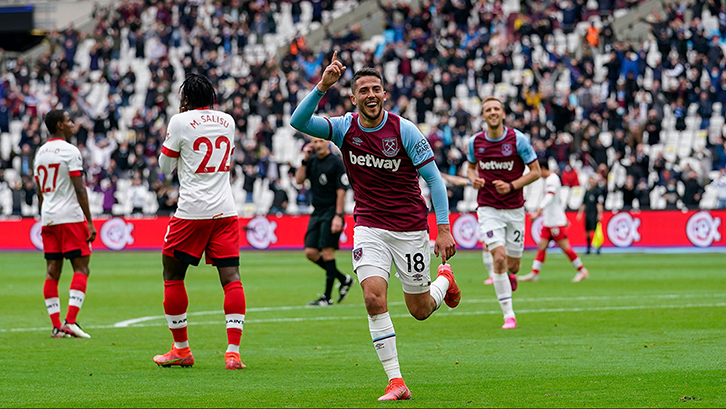 A first-half brace from Pablo Fornals and a late goal from Declan Rice saw West Ham United beat Southampton to cap a memorable 2020/21 season with qualification for the UEFA Europa League.

Going into the final game of the season knowing that a point would be enough to secure sixth place - and with it European football next season - the Irons' initial nerves were settled by a quickfire pair of close-range finishes from Fornals midway through the first half.

Those goals sent the 10,000 Claret and Blue-clad supporters - attending London Stadium for the first time since December - into delirium, and granted the Hammers an element of control they thenceforth never looked like relinquishing.

A late break from Rice saw the West Ham captain slot past Southampton 'keeper Alex McCarthy to cap a glorious day in East London - sealing a 3-0 win which sets the Club's all-time record for Premier League points in a single season at 65.

Goalkeeper Lukasz Fabianski and forward Jarrod Bowen both returned to the West Ham United starting XI for the final game of the season, with Darren Randolph and Said Benrahma named among the substitutes.

Understandably given the magnitude of the occasion, the Hammers looked nervous in the opening exchanges, with the visitors – having little more to play for than pride – the more incisive attacking force early on.

Southampton will have felt they should have taken the lead on the break inside ten minutes. Captain James Ward-Prowse exchanged passes with Danny Ings, strode over the halfway line and played in Takumi Minamino on the overlap.

Clean through, the forward’s lofted finish cleared both Fabianski and, much to the Irons’ relief, the far post.

At the other end, West Ham were consistently threatening from set pieces and came close to taking the lead with 20 minutes gone when Bowen’s in-swinging corner was palmed onto Walker-Peters’ back by McCarthy.

Despite the visitors’ appeal for a foul amidst a scramble of bodies, the deflection saw the ball diverted goalwards, and only an athletic goal-line clearance from Mohammed Salisu stopped it from crossing the line.

As close as they had been, however, the Hammers were soon twice indebted to their shot-stopper for keeping the scores level, Fabianski denying both Ings and Walker-Peters in the space of a few minutes.

The former occasion arrived when the Southampton striker looked set to pounce on a loose ball in the box, only for the West Ham ‘keeper to slide in and clear his lines; the latter when the full-back – who had run in behind – saw his low finish deflected behind by Fabianski’s legs.

With a quarter of the game gone, Southampton were creating the superior chances, with Ings’ looping header from Nathan Redmond’s hanging cross forcing Fabianski to scramble across his line to catch.

But the game remained open, and soon after Dawson run off his marker to meet Aaron Cresswell’s chipped free-kick. His headed effort, looping up, did not drop quickly enough to land beneath the crossbar.

Pablo Fornals was the next player in Claret and Blue to have a dead-ball opportunity; Vladimir Coufal’s long throw was flicked on by Antonio but, at midriff height, forced Fornals into an acrobatic effort which sailed over the bar.

Another throw and another Antonio flick allowed Bowen to take the ball in his stride, flick it past an outstretched boot and, on his weaker right foot, fire a low shot across goal. On the stretch, McCarthy could only palm it out to the Spaniard.

As 10,000 supporters surged to their feet in anticipation, Fornals’ finish felt inevitable; the ball was almost sucked into the goal as the Spaniard slotted home to send a wall of Claret and Blue into rapture. 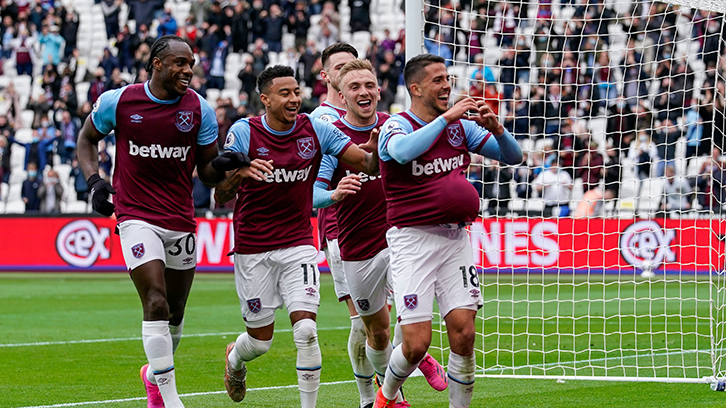 Just three minutes later, the Spaniard had his second. After Lingard’s cross evaded both teams, Coufal dug out a pull-back towards the penalty spot where Fornals – albeit slightly scuffing his finish – found the bottom corner to gift his team a monumental advantage.

That quickfire brace saw West Ham take firm control of the game, the early wind stolen from Southampton’s sails and the Hammers beginning to well and truly to set a course for the Europa League.

After a rousing reception at half-time, both Souček and Lingard saw close-range efforts blocked in the opening minutes of the second half as they looked to consolidate their team’s lead.

Yet Southampton did continue to create moments of consternation for the home support, Fabianski twice being called into action in quick succession with top-corner stops from Ings’ rising drive and Jan Bednarek’s flicked header.

The pattern of the match settled in its third quarter as the Hammers looked to retain possession and the Saints – to their credit – persisted with a pacey counter-attack which West Ham did well to match with blocks from Dawson, Angelo Ogbonna, Souček and Cresswell.

With just under 20 minutes to go, central midfield partners Rice and Souček almost got in on the act themselves, but both were unable to make contact with Bowen’s whipped free-kick when well-placed.

Southampton substitute Nathan Tella then forced Fabianski into a comfortable low stop from the edge of the area, before Bowen came close to slipping in Lingard with a skilful exchange of passes.

With ten minutes to go, Southampton had their two clearest opportunities of the match, Redmond cutting back onto his right foot before smashing the ball into the side-netting before Diallo had a goal chalked off for offside.

Second-half substitute Benrahma had an opportunity to score his first goal at London Stadium in the dying embers, but thrashed his finish into the side-netting after good approach play from Bowen.

The result was wrapped up with four minutes to go when Fornals turned provider, nipping in to deflect the ball into Rice's path. Striding into the area, the captain looked up, assessed his options - and slipped the ball in between McCarthy and his near post for his fifth goal in Claret and Blue.

Running over to celebrate with his exuberant teammates and ecstatic supporters, Rice's goal put the gloss on confirmation that West Ham United would be playing Europa League football next season.

At full-time, a supporters' rendition of 'I'm Forever Blowing Bubbles' was sung so loud, so proud, so boisterously, you'd have thought there were 60,000 present to witness a special day in modern West Ham United history.