West Ham United v Southampton - All You Need To Know 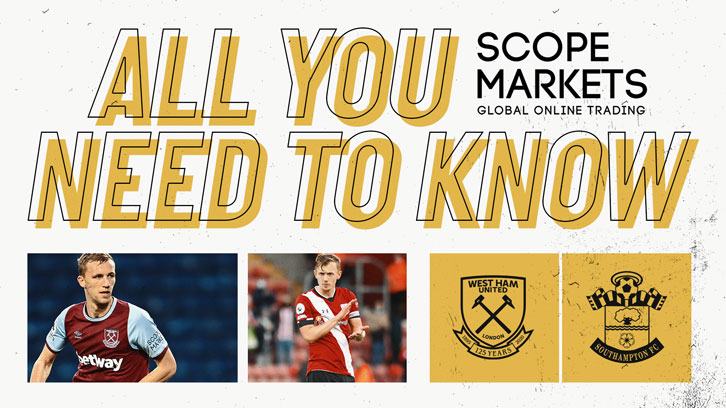 The Hammers welcome Southampton to London Stadium knowing a point will secure a place in the UEFA Europa League group stage for next season.

What's more, the Irons will welcome 10,000 fans back to their home after COVID restrictions were loosened this week.

West Ham are seeking to make it seven Premier League games unbeaten against Southampton, having won five in a row before being held to a goalless draw at St Mary's Stadium just after Christmas.

Everyone at West Ham United would like to warmly welcome 10,000 Hammers supporters back to London Stadium for Sunday’s final fixture of the 2020/21 Premier League season against Southampton.

It is almost certain that this will be those fans' first visit back to the stadium for a match since we last faced the Saints here – way back in February 2020, our most recent home fixture in front of a full crowd.

We are delighted that 10,000 loyal Season Ticket Holders and Club London members will be here with us and hope you enjoy what will hopefully be a memorable finish to an excellent campaign for the Hammers. For all matchday information please visit the Hammers Hub page.

Alternatively, you can read a FREE digital issue by clicking here now!

In Sunday's issue, Declan Rice reflects on a unique season in which he has captained the Hammers on more than 20 occasions and looks to finish the campaign with a victory.

The Evening Standard's Ken Dyer hands out his seasonal awards, Sid Lambert goes Back to the '90s to remember a memorable win over Southampton, Mark Webster heads back down the Added Time Tunnel, and we conclude our look back through the Club's 125th history. 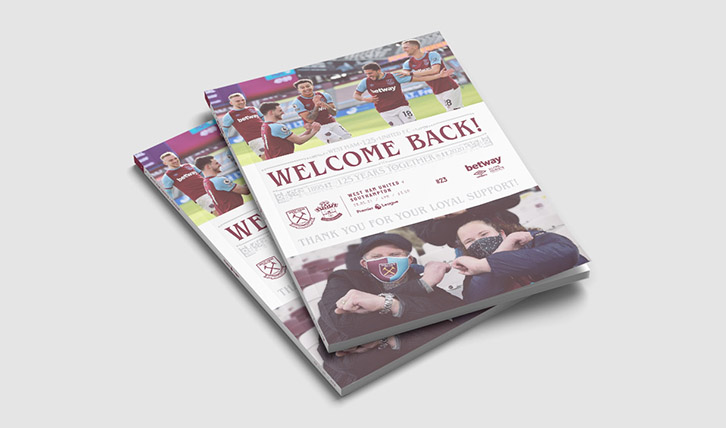 Goalkeeper Lukasz Fabianski suffered a knee injury in the warm-up ahead of Wednesday's win at West Bromwich Albion and will be assessed ahead of Sunday's game.

Southampton hope to have Spanish defensive midfielder Oriol Romeu back from a foot injury, but left-back Ryan Bertrand is set to miss out with a calf problem.

Midfielder Will Smallbone is out with a serious knee ligament injury, but Scotland striker Che Adams will hope to recover from a groin issue.

Five years ago, Southampton edged out West Ham United for sixth place in the Premier League and qualified directly to the UEFA Europa League group stage.

It continued a period of upward progression for the Saints, who had been promoted automatically ahead of the Hammers in 2012, then finished eighth, seventh, sixth and eighth in 2014, 2015, 2016 and 2017 respectively.

Since then, however, Southampton’s momentum has slowed, with the Hampshire club failing to reach the 40-point mark and narrowly avoiding relegation in both 2017/18 and 2018/19, before finishing in a more creditable eleventh with 52 points last season.

That improvement was masterminded by Austrian manager Ralph Hasenhüttl, who was appointed following a successful spell with RB Leipzig in December 2018, and based on the 25 goals scored by England striker Danny Ings. 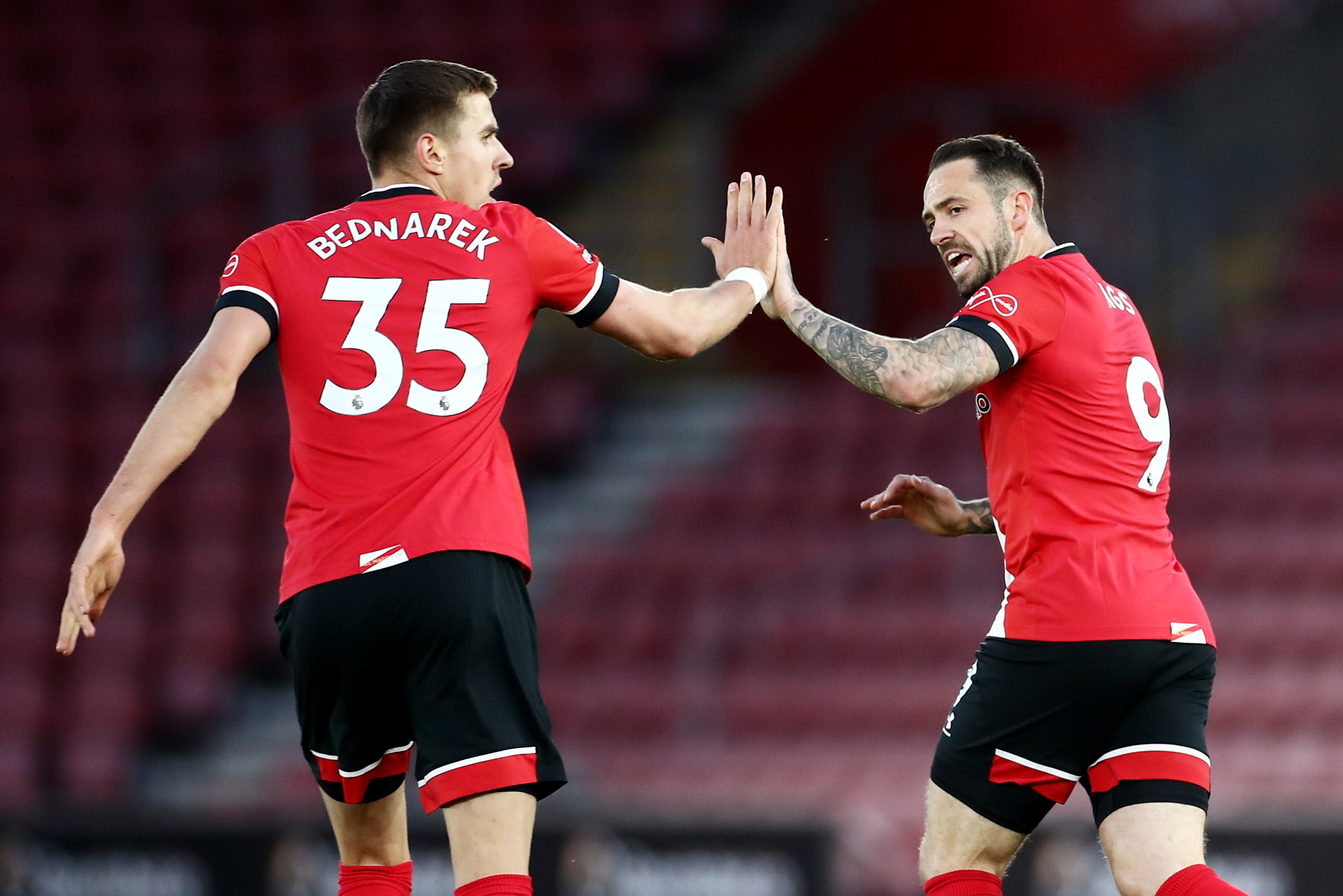 However, Southampton conceded 60 goals last season, including nine in a calamitous home defeat by Leicester City, and that defensive frailty has cost them again this season. This time around, the Saints have conceded 65 goals, including another nine at Manchester United in February.

As recently as 4 January, Southampton sat in the Premier League’s top six, while a run to the Emirates FA Cup semi-finals proves today’s visitors have the ability to win one-off matches, but consistency has eluded them in 2021.

Premier League wins have proved hard to come by and, arguably, only the inability of the bottom three to put a run together has ensured the Saints’ top-flight status.

West Ham United welcome Southampton to east London for their final match of the 2020/21 Premier League season, and the 38th Premier League meeting between the two clubs, on Sunday.

The Hammers hold their European destiny in their own hands, knowing a draw or win will confirm sixth place and a place in next season’s UEFA Europa League group stage for the first time. 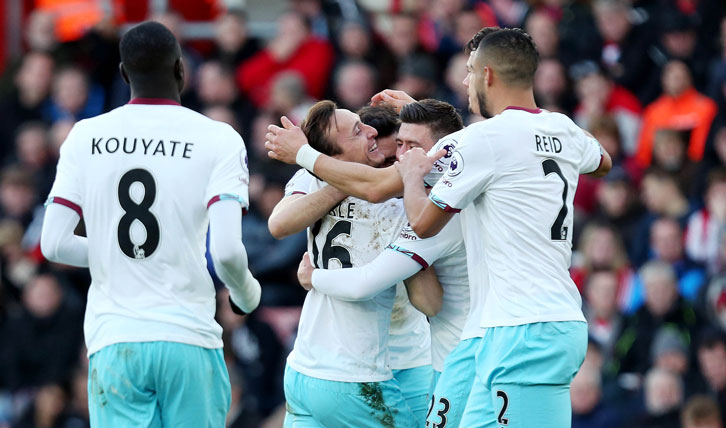 A defeat, combined with a Tottenham Hotspur win at Leicester City, would see the Irons drop to seventh and qualify for the Play-Off round of the new UEFA Conference League.

And a heavy defeat, combined with a big Everton win at champions Manchester City, and a nine-goal swing, would see West Ham drop to eighth and miss out on Europe altogether.

West Ham hold the head-to-head advantage over Southampton, winning 18 of the previous 37 meetings, with eight draws and eleven victories for the Saints. The Irons have outscored the Saints 55-41 in the 37 top-flight games between the two since the 1993/94 season, and also kept 13 clean sheets to Southampton’s eleven.

The Irons’ all-time biggest Premier League win over Southampton came at the Boleyn Ground in October 2012, when Mark Noble scored twice in a 4-1 victory.

1    West Ham United have been awarded just one Premier League penalty in the 37 meetings between the two clubs. It was scored by Mark Noble after future Hammer Jose Fonte was penalised for handball during the Irons’ 4-1 win at the Boleyn Ground on 20 October 2012. Noble also scored with a direct free-kick in the same game.

17    Sticking with Mark Noble, the West Ham United captain has faced Southampton on 17 occasions during his long and illustrious career, with the first coming as a substitute during the Saints’ 1-0 Championship win at St Mary’s Stadium on 18 October 2011. The 34-year-old has scored five goals and assisted three more in his 17 games against today’s visitors.

8    Nobody has scored more competitive goals for West Ham United against Southampton than Danny Shea. All eight came during the two clubs’ time in Southern League Division One, with the first netted in a 4-2 home win in April 1908 and the final two in a 3-1 win at The Dell in October 1912.

5-1    West Ham United’s biggest win over Southampton was also achieved during the Southern League days – 5-1 at the Boleyn Ground on 11 October 1913. George ‘Gatling Gun’ Hilsdon fired in two of the five goals, with Frank Burton, Herbert Ashton and Jack Casey also on target.

18    Eighteen players have made their West Ham United debuts in competitive fixtures against Southampton, the most recent of which was Craig Dawson, who appeared for the first time in the goalless draw at St Mary’s Stadium on 29 December 2020. Before him, both Alexander Davidson (1902) and George Chalkley (1908) fittingly debuted against the Saints on Christmas Day. The 15 others were Robertson, Fred Harrison, William Adams, Jack Kirkaldie, Arthur Banner, George Sadler, Joe Payne, Bobby Howe, Alan Stephenson, Warren Donald, David Kelly, Florin Răducioiu, Ian Moore, Nicky Maynard and Emmanuel Emenike.

2    Two men have managed both clubs – Harry Redknapp and Alan Pardew. Redknapp, who also twice managed Southampton’s local rivals Portsmouth and still lives on the south coast, took over at St Mary’s Stadium in December 2004 and spent a year and 49 games in charge, but was unable to save Saints from relegation in 2005. Pardew’s reign was also short, spanning just 13 months and 64 matches, but he did win 34 of them and lift the Football League Trophy thanks, in part, to Michail Antonio’s goal against Carlisle United in the 2010 final. West Ham United’s 1923 FA Cup final captain George Kay also managed Southampton between 1931-36 and is widely credited with introducing the club’s first real youth academy, which produced the likes of Ted Drake and Charlie Sillett, and also signed his former teammate and Hammers’ all-time leading goalscorer Vic Watson.

6    West Ham United have faced Southampton six times in FA Cup ties – and never lost! The first two were played in the first round in January 1920, with a goalless draw at The Dell being followed by a 3-1 Hammers win in the replay at the Boleyn Ground. Three years later, the pair played out 1-1 fourth-round draws at both stadiums before West Ham prevailed 1-0 in a second replay at Villa Park (!) on their way to the final. And the Irons kicked-off their run to winning the trophy in 1975 with a 2-1 third-round win at The Dell, where Frank Lampard and Bobby Gould got the goals.

The 50-year-old has officiated West Ham United on 57 occasions, including the wins over Chelsea and Watford at London Stadium in July 2020, and the victories over Wolverhampton Wanderers here and away at Sheffield United this season