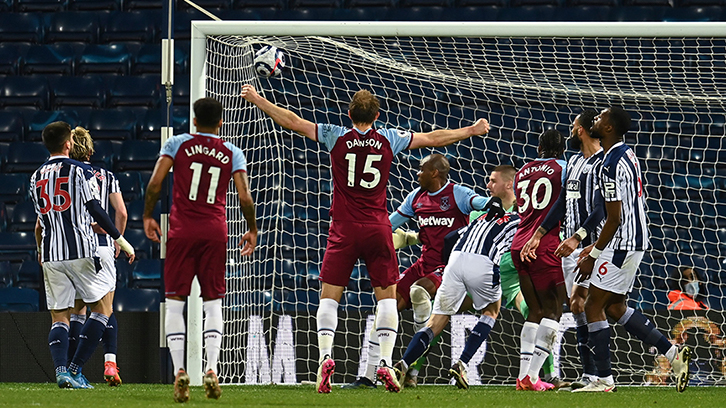 Two well-taken late goals saw West Ham United move within a point of securing their place in next season's Europa League after a 3-1 win over West Bromwich Albion.

Having been held on the road by Brighton & Hove Albion four days prior, David Moyes' team endured a challenging first half at The Hawthorns, with Declan Rice hitting the post with a penalty inside two minutes before conceding to Matheus Pereira's direct corner kick.

Yet as they have done so often this season, the team in Claret and Blue showcased their powers of recovery when Tomáš Souček stabbed in Said Benrahma's low cross on the stroke of half-time.

And after a second half which saw both teams enjoy their share of opportunities - West Ham going closest when Aaron Cresswell struck the woodwork with an opportunistic free-kick - Angelo Ogbonna thundered in to head home a corner in the closing stages.

Three priceless points were wrapped up five minutes later when Michail Antonio finished off a superb counter-attack to put the Irons on the verge of qualifying for European football through their league position for just the third time in the Club's history.

The goals also sealed West Ham's first league double over West Brom since 2005/06, and capped off a season in which they have won a Club record 31 points away from home in the Premier League.

Moyes had initially made one change to his starting XI for the trip to The Hawthorns, with Benrahma rewarded for a memorable first West Ham goal on Saturday by coming in for Jarrod Bowen.

A second change in the warm-up, however, saw goalkeeper Lukasz Fabianski pull out after initially being named in the team; the Poland international was replaced between the posts by Darren Randolph.

The Baggies, meanwhile, were buoyed by the return of home supporters to their West Midlands ground, but despite them understandably being in fine voice, the Hammers won the perfect opportunity to silence them after 60 seconds.

If Kyle Barley’s clip on his heels didn’t bring down Michail Antonio – who had made capitalised on Semi Ajayi's loose backpass – then goalkeeper Sam Johnstone’s bodycheck certainly did, sending the No30 sprawling for a spot kick inside the opening two minutes.

Up stepped West Ham captain Rice with the chance to score his fifth goal for the Club, but while his strike was true and had Johnstone beaten, it hit the outside of the goalkeeper’s right-hand post and bounced clear.

The Irons did not let up, however, and Benrahma was the next player to try their luck in the opening ten minutes with a dipping effort from 25 yards. This time, Johnstone made a sprightly stop to tip the ball over the bar.

The Hammers’ playmakers were beginning to spray the ball around ominously, with Jesse Lingard taking out a number of West Brom defenders with a delightful clipped past to the on-rushing Vladimir Coufal. The full-back’s low cross, however, was cut out by Bartley moments before it could reach Czech teammate Souček.

Where fortune had evaded the Irons in the opening moments, it smiled fervently on the Baggies midway through the first half.

Seconds after Ogbonna had gotten an important toe to Darnell Furlong’s near-post cross, Pereira’s in-swinging corner found its way past the combination of Randolph and Souček near the same portion of the goal.

Initially appearing to be a Souček own-goal with the delivery flicking off the top of his head, the goal was later credited to West Brom's Brazilian attacker – scant consolation for the Hammers, who had up to that point been the better side.

The goal threatened to change the dynamic of the contest, with the next big opportunity also going West Brom’s way when Conor Townsend saw his free-kick blocked by the wall and subsequently opted to smash the rebound back into the box.

After two deflections, it reached Pereira, whose snap shot looped up off Cresswell’s challenge and forced Randolph into an instinctive save, high above his body with little time to react.

Yet Moyes’ team, as they have done so well all season, remained calmed and committed to playing themselves back into the game.

Lingard, after some industrious work from Fornals, attempted a curling effort from a seemingly ambitious angle – but his shot was struck well enough for Johnstone to feel compelled to fingertip the ball behind.

Then, on the stroke of half-time, West Ham’s patience was rewarded with a game-changing goal by Souček. Fornals' cross – flicked on by a West Brom head – reached Benrahma at the far post in plentiful space.

The Algerian international slid a well-measured pass across the face of goal for the awaiting Souček, who tapped in his tenth Premier League goal of the season before subsequently being confirmed as onside by VAR.

Just two minutes into the second half, lightning nearly struck twice via Pereira’s whipped corner kick, but Randolph showed sharp reflexes to tip the ball over the bar, with referee Michael Oliver then blowing up for a foul on the Republic of Ireland international.

Benrahma was involved in another Irons’ chance two minutes later, flicking the ball beyond his marker and laying off to Fornals on the corner of the area, but the Spaniard – cutting inside – struck an arcing effort which sailed past the post.

As West Ham fans might have expected prior to kick-off, West Brom’s greatest threat was stemming from their set-pieces, and after a crowd of bodies from both sides attacked a long throw, Randolph was forced to react smartly to smother Ajayi’s poke from close range.

With the game ticking into its final quarter, Cresswell enjoyed a minute of both anxiety – his sliced right-footed clearance almost playing in Robson-Kanu – and of inspiration, a brilliantly realised 40-yard free-kick striking the outside of the post with Johnstone still organising his defence and hence utterly stranded.

The pattern of an open-ended game continued in its closing stages, with the Irons the more threatening team with the ball on the grass but West Brom ever-menacing when presented with the chance to take the aerial route.

When West Ham did break forward, it was their final ball letting them down, but with ten minutes to go substitute Jarrod Bowen produced a brilliant reverse pass to put Fornals in down the right channel. The Spaniard attempted to catch Johnstone off guard with a first-time effort, but the 'keeper was well-positioned to kick behind.

Moments later, however, and Moyes' men had their lead. The source was Ogbonna with a goal as straightforward as you'd like: a whipped Cresswell corner, attacked with real desire by the Italian international at the far post. From inside the six-yard area, Ogbonna couldn't miss.

The points were sealed five minutes later when, with the home team pressing, Fornals and Lingard combined to force a three-on-two counter-attack, the latter prodding the ball past the defender for Antonio to drill low into the far corner.

There was still time for Coufal to come close to scoring his first West Ham goal in the dying stages, but he was denied by a low stop from Johnstone.

The points - which see West Ham equal their record tally in the Premier League, the 62 attained in 2015/16 - had been well and truly wrapped up by that stage.

Just one more from their final game against Southampton on Sunday - a point which would break that Club record - would be enough to secure sixth place in the Premier League table and, with it, Europa League football next season.