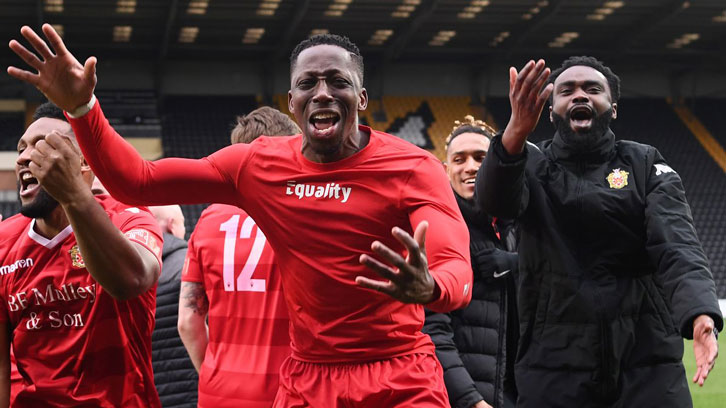 West Ham United would like to congratulate Hornchurch FC on reaching the FA Trophy final and securing their first-ever trip to Wembley.

The Urchins completed an historic run to the Home of Football with a thrilling semi-final victory at Notts County on Saturday, coming from a goal down three times to draw 3-3 before winning the penalty shootout.

After Liam Nash equalised in the first minute of added time with his second goal of the tie at Meadow Lane, goalkeeper Joe Wright made himself the hero, saving Jake Reeves’ spot-kick before Chris Dickson scored to send Mark Stimson’s side through.

The east London side won seven ties to reach the final of the FA Trophy, the premier knockout competition for non-league clubs, including upset victories over National League sides King’s Lynn Town, Maidstone United and Notts County, who played in the top-flight as recently as 1991/92.

Hornchurch, situated in the Hammers heartland just a few miles from the Club’s Rush Green and Chadwell Heath training grounds, will face National League North side Hereford at Wembley on Saturday 22 May.

The Urchins’ run was all the more impressive when you consider they have not played a match in the Isthmian League since the competition’s 2020/21 season was suspended in early November.

As the leading club in east London, West Ham has regularly supported local non-league teams, hosting reserve and women’s team matches at Thurrock, Bishops Storford, Dagenham & Redbridge and Hornchurch, supporting the club’s appeal for funds to overnight stays ahead of their quarter-final and semi-final victories.

Joint-Chairman David Sullivan, who lived in Hornchurch and attended matches as a youngster, has provided financial support to the club during their successful FA Trophy campaign. He was delighted to see the Urchins set up the biggest game in their 98-year history.

“This is a fantastic story and a brilliant achievement for a proud and historic east London football club,” Mr Sullivan enthused. “Congratulations to everyone involved in what is an old-fashioned story of the underdog coming good that every football fan loves.

“As well as being a West Ham fan, I have always been someone who wants to help local clubs where I can, and I know many fellow Hammers feel likewise and donated to help Hornchurch achieve their goal of reaching the FA Trophy final.

“I grew up in Hornchurch and I remember going down to watch them play when I was a boy. Now, I hope I and many other supporters will be able to go and watch them play at Wembley!”