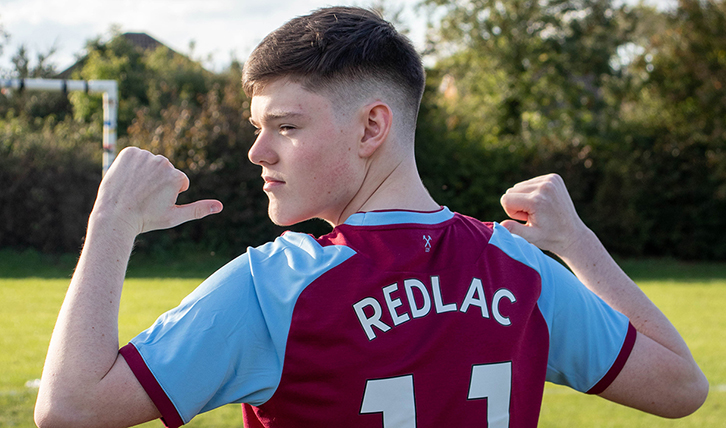 West Ham United will be represented at the end-of-season FIFA Global Series Regional Playoffs this week, with 18-year-old Alfie ‘AC RedLac’ Calder having qualified for the event.

The Xbox One player enjoyed a strong finish to his FGS campaign, a top 13 place finish in the final Qualifier event meaning RedLac ended the season with 1152 Global Series Points to his name – the 52nd-highest total in Europe.

While the top 64 players typically advance to the European Playoffs, a number of those spots were on offer to the winners of 30 domestic leagues worldwide – offering a route to qualification for those players who did not accrue enough points over 2020/21.

That meant that, despite playing his final Qualifier event in April, RedLac’s place in the European Playoffs was only confirmed three weeks ago, when the results of France’s domestic FIFA league – eLigue 1 – led to his spot being mathematically secured.

Now, for the first time since FIFA 18 and Jamie ‘Jamboo’ Rigden, a West Ham professional FIFA player is set to represent Claret and Blue in the culmination of the FIFA season, with RedLac this week to be pitted against the continent’s top FIFA 21 players at the European Playoffs.

Looks like this is the Team I will be using for the EU playoffs next week, like I said aim is to make the World Cup... Just played for 11 hours straight 💤 1 more week grinding then we can chill pic.twitter.com/80O1VZceAk

The preliminary rounds of the competition - a Swiss group stage which is not broadcast live - will be played on Wednesday, with updates on RedLac's progress available via @WestHamEsports on Twitter and Instagram.

Should RedLac advance from those, Xbox finals games are set to take place between 2 and 4 July, broadcast live on the official EA SPORTS FIFA Twitch channel.

There, he will bid to win the title of Regional Champion and – from there – be one of the top 32 players in the world to advance to the ultimate FIFA event, the FIFAe World Cup, which is scheduled to be held in-person – the first offline event since February 2020 – in London in early August.

RedLac has a long way to go before he can begin dreaming of such heights, but can look back with pride on reaching the highly-competitive European Playoffs in such a unique season.

He told whufc.com: “It’s been a hard year but I’ve given it my all and I'm really pleased to have reached the FGS Playoffs this week.

“Hopefully I can compete strongly this week and give it my best for West Ham United. Come on you Irons!”