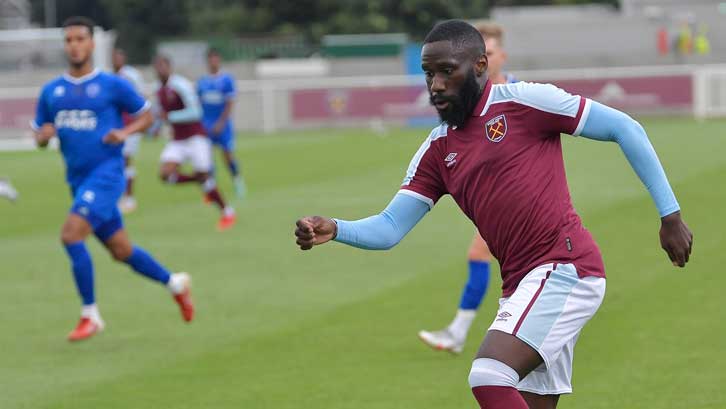 The DR Congo international returned to action after missing the tail-end of last season with a knee problem and impressed during his 45 minutes on the pitch at Rush Green Stadium, defending strongly and providing an assist for Armstrong Okoflex’s opening goal.

Masuaku was powerless to stop Aldershot equalising when Pierre Ekwah’s pass was intercepted by Toby Edser and the No8 powered a left-foot shot high past David Martin, and he had been replaced by the time Kevin Lokko headed Lewis Kinsella’s cross in at the near post early in the second half.

However, the Hammers stuck to their task and were rewarded 19 minutes from time when Okoflex pounced on a loose ball and smashed high into the net from around 12 yards to level.

The Irons controlled the game for long periods in front of watching first-team manager David Moyes and coaches Kevin Nolan, Billy McKinlay and Stuart Pearce, and it was summer signing Okoflex who provided the cutting edge to score his third and fourth pre-season goals.

With Martin and Masuaku joined in the starting XI by a number of youngsters who have featured for Moyes in pre-season, including defender Jamal Baptiste, midfielders Pierre Ekwah and Keenan Forson and attacker Okoflex, West Ham played the more attractive football, but found a Shots side managed by former Academy of Football coach Danny Searle resolute, determined and effective opponents.

Indeed, with captain Kinsella providing superb left-foot deliveries from set pieces, Martin had to be alert to claw away a looping header from Edser early on.

West Ham then settled down after a nervy start, which included an unmarked Dan Chesters blazing over from close-range, and went ahead on 22 minutes in some style.

Masuaku was the creator, starting a move from deep that saw Mesaque Dju run onto Bernardo Rosa’s pass before cutting the ball back for the left-back. He released Okoflex with a perfectly-weighted ball with the outside of his foot and the No11 kept his composure to finish low across goalkeeper Mitch Walker.

Having gone ahead, Dmitri Halajko would have wanted his team to push on, but instead they allowed Aldershot back into the game.

It was from a loose piece of play that the equaliser arrived on 31 minutes through former Nottingham Forest youngster Edser, who collected an errant pass, burst past Will Greenidge and fired high past Martin.

And the hosts would have been behind at half-time had it not been for a superb double-save from the lifelong West Ham fan, who first blocked Lokko’s close-range shot, then showed outstanding reflexes to divert Giles Phillips’ volley over the crossbar from Kinsella’s resulting corner.

Four minutes into the second half and Martin could do nothing to prevent Searle’s side taking the lead as another dangerous in-swinging delivery from Kinsella was headed in at the near post by centre-back Lokko.

To their credit, the young Hammers regrouped and piled pressure on the Aldershot defence, with right-back Harrison Ashby repeatedly getting in behind with strong forward runs.

It was from an Ashby switch of play that the equaliser finally arrived as a left-wing cross was not properly cleared and Okoflex fired unerringly into the net.

West Ham continued to push for a late winner, with substitute Levi Laing heading over six minutes from time, but ultimately Halajko and his players had to settle for a hard-fought draw.