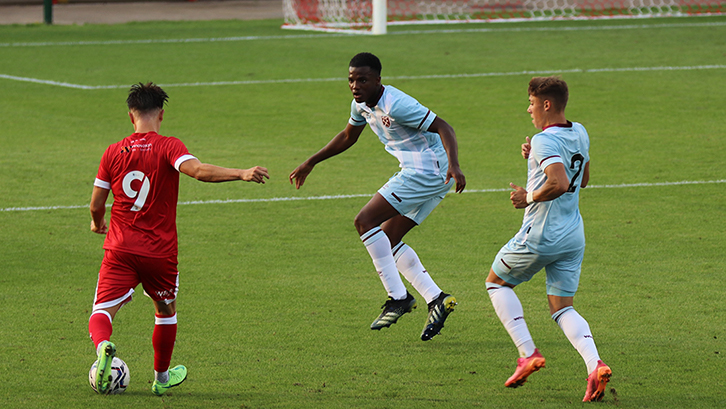 West Ham United U23s could consider themselves unfortunate in defeat as they slipped to a late 2-1 defeat to League Two side Crawley Town on Monday evening.

The Hammers were on the back foot for long stretches of the first half and fell behind early on to a close-range header from a Trialist, but rallied after the break and had a succession of opportunities they sadly could not put away.

But Crawley went on to win it with ten minutes to go when Sam Ashford picked up a rebound in the West Ham area and squeezed the ball in at Krisztian Hegyi's near post.

For the third time in three pre-season games, West Ham’s U23s were facing a senior team buoyed by the return of home supporters for the first time since pre-pandemic times.

Initially, it told, as Crawley’s bright start to the game saw Jack Powell – a former Academy of Football player himself born in Canning Town – blast a direct free-kick from 25 yards well over the bar.

Leading the line after his first senior goal in Claret and Blue at the weekend, Hammers’ No9 Armstrong Okoflex then had his own effort from distance. A long ball over the top from Hegyi bounced through to Crawley ‘keeper Glenn Morris, who sliced it straight to the Hammer. The young Irish forward's attempted lob, a full 35 yards out, drifted over.

Disappointingly, Crawley took the lead after ten minutes when Hegyi failed to hold a set-piece delivery from Tyler Frost, allowing a Trialist to apply a simple header from close range.

Okoflex then produced a deflected effort to trouble Morris at his near post, before Crawley once again won the first header at an offensive set piece, Tony Craig nodding wide when he ought to have scored.

Emmanuel Longelo, once again wearing the captain’s armband for West Ham, did well to get his body across and deflect Frost’s next effort wide as the hosts turned up the early heat.

The Hammers produced their best move of the match after 25 minutes. With Crawley unable to fully clear Ashby’s whipped free-kick, Halajko's team worked the ball beautifully with some quick passing from left-to-right, culminating in Okoflex playing in Amadou Diallo down the right.

The England youth international clipped the ball back into an inviting position for Will Greenidge to strike, but the centre-back – in space but far from his usual surroundings – could not make a clean connection with it after controlling on his chest.

Greenidge atoned moments later with a well-read block of Tom Nichols’ effort, but the home team – perhaps to be expected given their seniority and status – were looking the more likely to add to the scoresheet in the first half.

The game simmered down in the period before half-time, with West Ham seeing more of the ball without quite stringing enough passes together in the final third to create much with it. 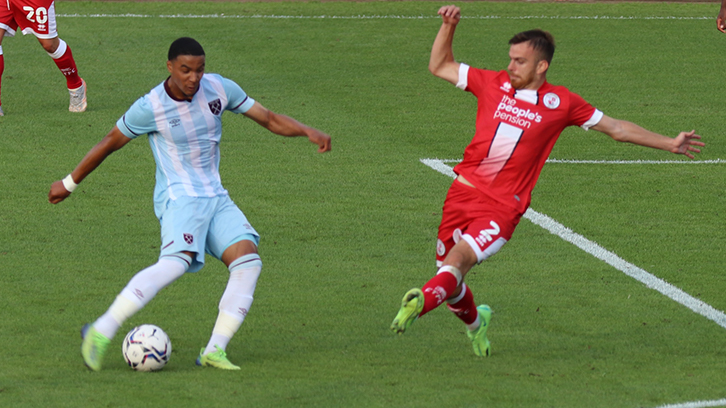 Making four substitutions at the break, Halajko’s development squad came out for the second half with renewed purpose at the People’s Pension Stadium, Okoflex only just unable to bring Ashby’s raking ball under his control when running clear.

The Hammers were truly alive in the match for the first time, and after Rosa fed a clever interchange between Nevers and Okoflex, the latter produced a cute reverse pass into the path of Dan Chesters – cut out at the last second before the West Ham man could get an effort away.

Picking up pockets of space in the No10 role, Chesters’ influence was beginning to grow, with a clever round-the-corner pass setting Nevers away down the inside right channel. Bursting into the area, the forward looked up but dragged his effort past the far post.

But he was not to be denied and, after an initial close-range effort from Ashby’s pull-back had been kicked away by Morris, Nevers showed great composure and skill to control the ball inside the area, take a touch, turn – and bury it beyond the ‘keeper powerfully.

Bursting with confidence, Nevers could have had his second a moment later. Picked out running down the right-hand channel by Ashby, the forward had a shot which – seemingly bound for the bottom-left corner – deflected wide of the far post.

The Hammers were soaring and the momentum of the match had completely shifted since the break. A superb piece of control from Rosa saw the Brazilian midfielder slide in Ashby, and the Scotland U21’s international’s cross required beating away by Morris. Okoflex, picking up the rebound, had a shot deflect wide.

Nevers was then withdrawn after sustaining a heavy challenge inside the area moments later, with regular U18s striker Divin Mubama given the chance to impress from the bench.

It took Crawley almost 25 minutes of the second half to muster a real scoring opportunity – but when it did arrive, it was one they should have taken, Sam Matthews’ beating his man with a piece of skill before blasting wide when well-placed.

But the home team were struggling to live with Ashby’s dynamism at the other end, and another fine charge down the flank - a common theme throughout the night - led to a powerful cross which only narrowly evaded the stretch of Okoflex at the far post.

And the avenue was explored again when Ashby ran in behind his full-back and produced a superb touch to bring down Greenidge’s 40-yard cross-field pass - yet the young Scot saw his effort kicked away at the near post.

Nichols could have won it for Crawley with 15 minutes remaining when he glanced over Powell’s in-swinging free-kick, but alas for West Ham's youngsters, the reprieve was temporary.

With ten minutes left on the clock, seconds after Hegyi had spread his body to produce a fine save to deny Nichols from close range, the ball fell kindly for substitute Sam Ashford, who wriggled past his man and squeezed the ball in at the near post.

Baptiste then produced an immaculate sliding challenge after Nichols looked to have run clean in on goal, but the result of the match had already been determined - with there being no shame for the Academy of Football's development squad in losing to a strong League Two side.