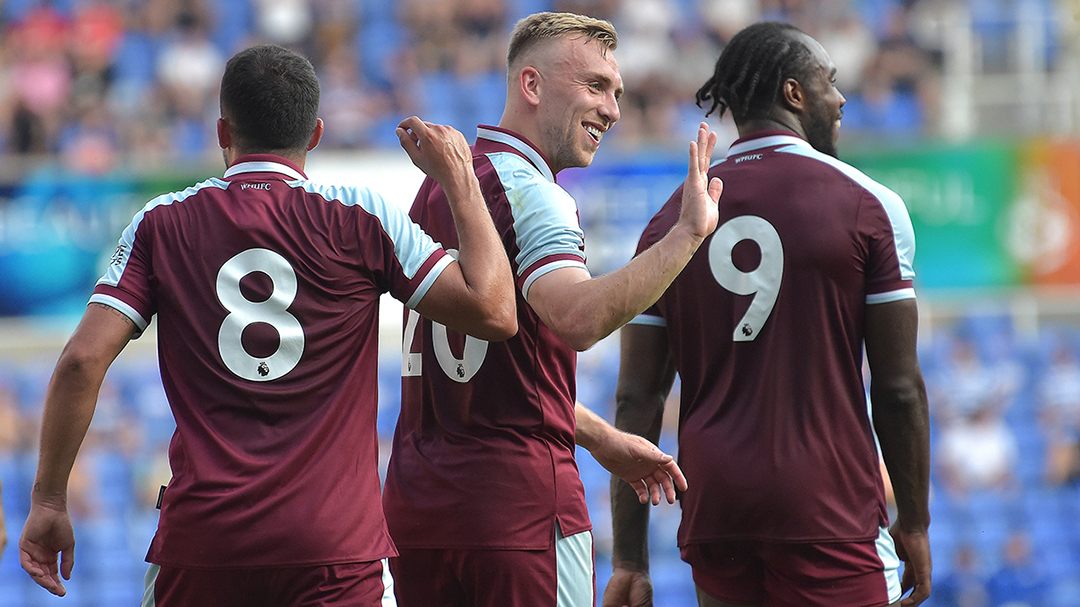 West Ham United scored three past Championship side Reading at the Select Car Leasing Stadium to earn their second pre-season victory in a row.

David Moyes' Irons were on top from the very opening moments of the game and would have enjoyed a greater lead than 1-0 at half-time, were it not for inspired goalkeeping from Reading's Rafael between the posts.

A fortuitous own-goal by Jeriel Dorsett eventually granted the Hammers the lead, and with West Ham manager David Moyes able to introduce a full raft of substitutes in a slower-paced second half, Academy of Football graduate Ben Johnson set up Conor Coventry for a tap-in before adding a third himself with a superb slaloming run in the closing stages.

The match also saw Pablo Fornals make his return to the starting eleven after the summer break, and it was he who had the first clear opportunity to take the lead after five minutes gone.

On the move from Johnson’s curling cross, the Spaniard got across his man to head goalwards from twelve yards, but Reading ‘keeper Rafael did well to scramble across and tip the effort past the post.

The Brazilian then got down smartly down to hold Jarrod Bowen’s powerful strike from distance, before narrowly beating the lively West Ham forward to Michail Antonio’s cute clip over the back line.

Antonio – proudly wearing his new No9 shirt – then came close twice aerially, on the first occasion being beaten to the ball by Rafael’s punch before glancing over another in-swinging cross from Johnson.

And it was Rafael to the rescue for Reading once more just before the half-an-hour mark when Fornals – also sporting a new number in No8 – played a delightful first-time pass round the corner for Bowen to chase. Once more, however, the ‘keeper was quick off his line to clear his lines.

Seconds later, a cutting counter-attack – sprung by a sharp pass from Conor Coventry – saw Bowen run at three defenders, beating two and cutting inside onto his favoured left foot as he bore down on goal.

Rafael – in inspired form in the first half – did well to block the winger’s initial shot with his foot, but when the ball popped out to Coventry, the Republic of Ireland youth international met it with a controlled shot and was only denied the opener by a stretching clearance on the line from Reading’s Andy Yiadom.

With Reading’s goal leading a charmed life, it eventually took a stroke of good fortune for West Ham to go in front. Bowen’s in-swinging corner was aimed towards the near post and, with Issa Diop challenging, the ball glanced in off the thigh of the unsighted Dorsett, who could do little about it.

Having been on the back foot for most of the game, Reading almost replied immediately, but John Swift – unmarked – could not guide Femi Azeez’s cross on target.

The Hammers were good value for their half-time advantage, and manager Moyes shuffled his pack at half-time as Angelo Ogbonna, Aaron Cresswell, Nathan Holland, Manuel Lanzini and Said Benrahma all entered the fray.

Soon after, West Ham believed they’d scored another goal in fortunate circumstances. Benrahma’s sweeping effort took a huge deflection off the back of the ducking Bowen, looping over Rafael – yet, with Lanzini chasing the loose ball, West Ham’s No20 was adjudged to be offside. 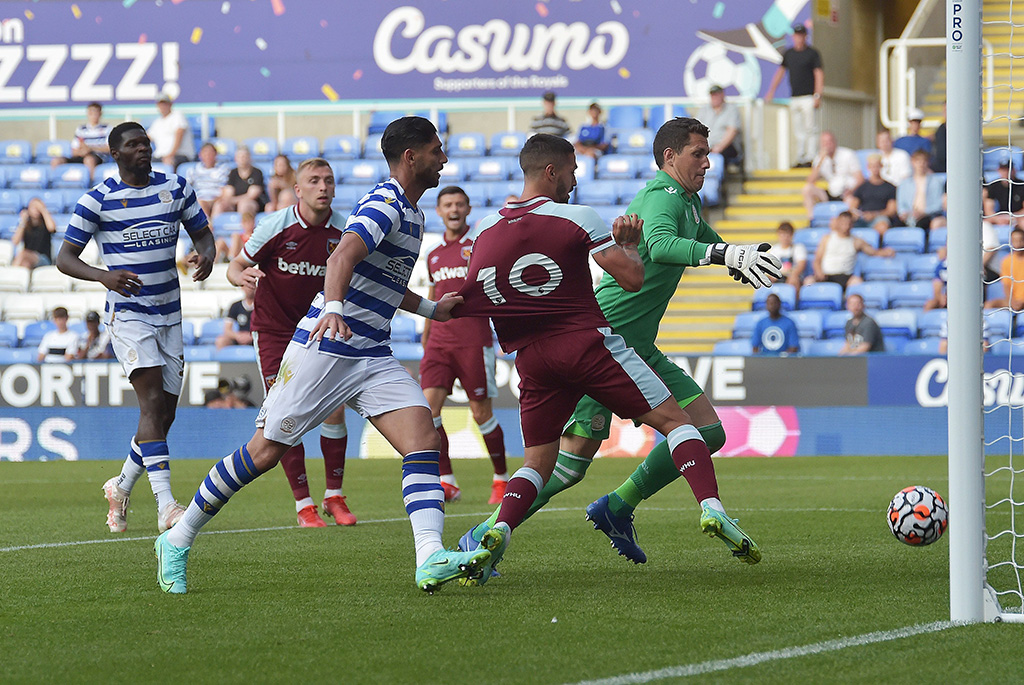 The Irons had picked up where they left off at half-time, doubling their advantage shortly before the hour mark. After Lanzini and Benrahma had done well to retain possession under pressure, Bowen teed up Holland for a shooting opportunity on the edge of the ‘D’.

The winger, however, opted to play a clever pass into the path of the overlapping Johnson, who slid the ball across the face of goal for fellow Academy of Football graduate Coventry to tap home his second first-team goal in little over a week.

Holland then came close to adding a third from a low Bowen cross following more good work from Lanzini, but Reading’s defender did well to slide in and nick the ball ahead of him.

For all his bright work, it did not prove to be Bowen's night in front of goal. After being released in behind by Benrahma, the winger – on his weaker right foot – cleared the goalkeeper with his effort, but also the crossbar.

Moyes continued to introduce substitutes as time ticked on in a bid to give his wider squad more minutes, but that did not stem their offensive momentum.

Substitute Frederik Alves flicked a header over when well-placed to meet Aaron Cresswell’s ball in, but it was another defender who’d add the Hammers’ third – and in some style too.

Johnson, who had been in productive mood all game, found himself in an advanced position with 15 minutes remaining. Controlling Lanzini’s ball to feet, 25 yards away and with his back to goal, the 21-year-old nicked the ball away from two Reading defenders, beat another two for pace – and crashed the ball over Reading’s substitute goalkeeper for a fine solo effort.

There was still time for another youngster in Mipo Odubeko to clear the crossbar with a curling effort, but Moyes had every reason to be pleased by the quality his side exerted on the ball - and match - throughout a dominant evening in Berkshire.