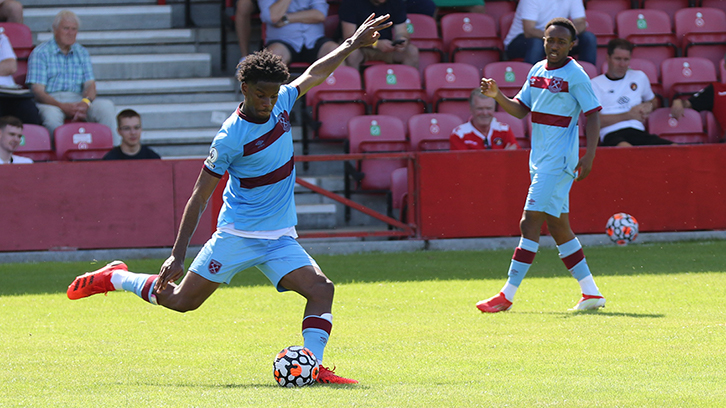 West Ham United U23s suffered a late defeat in their second pre-season fixture of 2021/22, going down 2-1 to Ebbsfleet United at Kuflink Stadium.

The National League South team were well on top in the first half and deserved their first-half lead through Dominic Poleon, but West Ham's youngsters came out reinvigorated for the second half and equalised within 30 seconds of the restart through Nathan Holland.

Yet despite a more even contest ensuing, a direct ball forwards in the closing stages was to prove Dmitri Halajko's side's undoing, allowing The Fleet's Elliott Romain to nip in and win the game with seven minutes left on the clock.

A searingly hot day also saw the return of supporters to Kuflink Stadium, with plenty of West Ham fans present in Kent to cheer on the development squad for the first time since March 2020.

As the first-team group were without a fixture over the weekend, U23s lead coach Halajko named a starting eleven featuring numerous Academy players who had been training and playing with them in preceding weeks.

They started brightly. A surging run from right-back Harrison Ashby after five minutes ended with a whipped cross from the Scotland youth international – inches off the toe of the sliding Nathan Holland.

Jamal Baptiste then read the game well to get across and block former Manchester United winger Lee Martin’s strike when the Ebbsfleet No11 tricked his way into a shooting opportunity on the left.

But the home team began to show the kind of form that had fired them into contention for promotion to the National League last season, responding by forcing two corner quicks in succession – the first well defended by West Ham captain Aji Alese, the latter overhit.

Ebbsfleet continued to pile the early pressure on. A swift switch of play from Newham-born Rakish Bingham allowed Dominic Poleon a central strike at goal – Ossama Ashley winded by the full force of the shot to his chest for the Hammers.

West Ham continued to ride their early luck when a shot from the edge of the area took two deflections before whistling wide, and a fiercely-struck cross required our Trialist in goal to tip away before Ashby could mop up the danger.

A series of clever deliveries and training ground routines were allowing Ebbsfleet to get shots away from set-pieces with regularity, so it was little surprise when they took the lead from a corner kick in the 22nd minute.

Craig Tanner’s in-swinging delivery looked like it might have been curling beneath our Trialist’s crossbar and in via the far post anyhow, but Poleon was in prime position to nod in from close range and make sure.

With temperatures soaring as high as 26 degrees Celsius in Gravesend, a mid-half drinks break was required, with lead coach Dmitri Halajko using the opportunity to bring his players together and spur them on after a tricky opening to the game.

After our Trialist goalkeeper had saved Bingham’s firmly-struck 25-yarder, good collective approach play put Ashby in down the right, but his low cross was cut out before it could reach the well-placed Holland.

Our Trialist was then forced to make a superb save. A long ball down the right saw Poleon loop a cross in, and with West Ham unable to clear and the ball falling at the feet of Bingham, the Ebbsfleet forward’s powerful shot required beating away. Bobbling up, the Trialist then dived bravely at his opponent’s feet to claim the rebound. 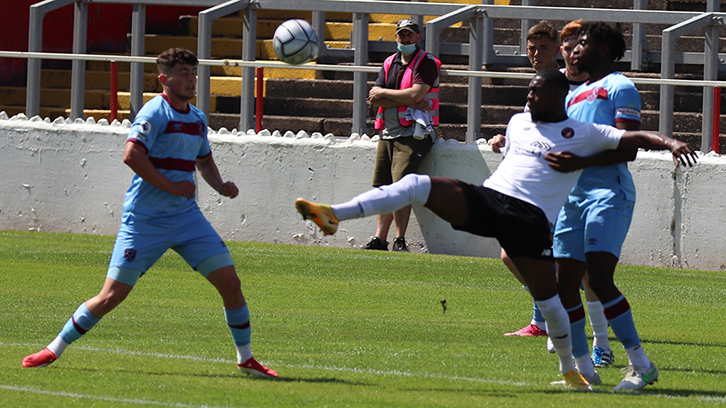 The Hammers’ clearest sight of goal came in the first half when a forceful run from Mipo Odubeko down the left channel led to him checking back onto his right foot – but his shot was blocked on the stretch and trickled through to the keeper.

It could not be argued that Ebbsfleet were full value for their lead in the first half – but it was a much more even affair in the second.

Indeed, just 30 seconds after the restart, the Hammers were level. A loose Ebbsfleet pass gifted Holland possession 30 yards out, and the winger – advancing towards the ‘D’  – arrowed an angled shot across the keeper and into the bottom corner.

Four minutes later, West Ham should have been ahead. A piercing run down the left touchline from Holland created space for him to switch it to Thierry Nevers on the opposite flank.

In on goal, but with the angle ever-narrowing, the No7 opted to pull back for second-half substitute Kamarai Swyer, who guided towards a seemingly empty net – only for Ebbsfleet’s defender to sprint across and somehow hack the ball behind on the line.

From the subsequent corner, Emmanuel Longelo’s in-swinger found Baptiste unmarked inside the six-yard area, but the defender - who scored from a similar situation in the first team's game against Dundee - on this occasion could only glance wide of the far post.

A raft of changes arrived for both teams on the hour mark, with West Ham introducing their fully remaining squad of substitutes as every player received valuable pre-season minutes.

Pierre Ekwah’s fine raking pass looked to have put Ashby in on goal – but the Scot couldn’t quite bring it under control – and Swyer’s incisive reverse pass almost put substitute Amadou Diallo in, but the ball overran.

Mesaque Dju then came close to adding West Ham’s second, but after seeing his shot well saved, the Portuguese forward was deemed offside anyhow after neat work around the area by substitutes Armstrong Oko-Flex and Swyer.

When Ebbsfleet thought they’d passed their way in on goal, Alese was there to intercept and clear in front of goal, moments before Ekwah saw a 25-yard direct free-kick narrowly clear the bar.

And it was Ebbsfleet who won the end-to-end contest late on when a long ball forward, flicked on, allowed Romain to race clear and slot home with seven minutes remaining, condemning our U23s to defeat in an entertaining, if ultimately disappointing, second pre-season fixture.