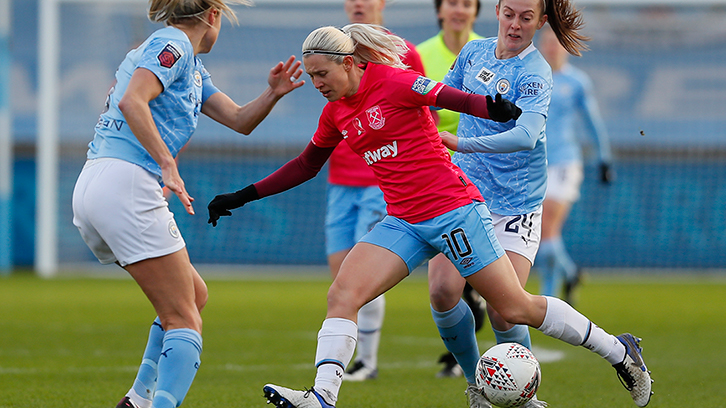 West Ham United battled hard but were ultimately unpicked by a clinical Manchester City side on Sunday afternoon.

Despite having encouraging spells in both halves, goals at either end of the first half granted the hosts an unassailable advantage which had some – perhaps harsh – gloss added in the second period.

In his second Barclays FA Women’s Super League match in charge, manager Olli Harder – on his 35th birthday – made one change from the side that defeated Durham 3-0 in the Continental League Cup quarter-finals in midweek.

Lois Joel replaced Cho So-hyun in the centre of midfield, with Harder’s Irons seeking their first WSL win of 2021 – albeit up against a Manchester City side who had scored seven times in both of their previous two league fixtures.

And it was the hosts who had the first sight of goal after two minutes, Ellen White’s shot from the edge of the area spinning up off of West Ham skipper Gilly Flaherty – requiring ‘keeper Mackenzie Arnold to tip it over to be certain.

Manchester City took the lead after ten minutes. Lucy Bronze drove forwards from right-back and laid the ball off to Chloe Kelly on the wing, whose delivery – following a fortuitous deflection – reached Caroline Weir, who slotted past Arnold at the back post.

The game look like it was settling into a pattern of attack against defence as Harder’s Hammers struggled to retain possession against high-quality opposition, and Weir could have had a second were it not for a sharp stop low to the right from Arnold.

Despite not having much of the ball, however, West Ham were impressive in their defensive discipline and shape for much of the first period, limiting the hosts to a smattering of half-chances.

And as the game wore on, it seemed like momentum was beginning to shift.

Despite struggling to create clear chances, West Ham’s intent was salient in one passage of rigorous pressing near to half-time. With Adriana Leon and Katerina Svitkova also in pursuit of the ball, Emily van Egmond almost dispossessed City goalkeeper Ellie Roebuck on her own goal line.

With confidence drawn from that moment, the Hammers were beginning to force errors and win the ball high up the pitch with increasing regularity.

West Ham went short again with a clever reverse ball to Maz Pacheco, whose hung cross was met by a towering leap from Laura Vetterlein. Between bodies, however, the German couldn’t quite generate enough power on her header to beat Roebuck.

But just as it seemed like the tide may be turning, City doubled their lead – again in arguably fortunate fashion.

Kelly’s cross in from the right was caught between home attacker and visiting defender, and the ball bobbled up invitingly for Georgia Stanway to turn and stab a volley into the roof of the net from close range.

Straight after half-time, another curling delivery from Greenwood caused Arnold a moment of consternation as it whipped over her head – but also curled away from her far post.

Once again, set-pieces were proving the most profitable way forward for West Ham. Five minutes into the second half, a chipped delivery from Leon almost picked out the on-rushing Flaherty at the far stick – and Houghton was forced to turn the ball behind under pressure.

But despite that flashpoint in the second half, City began to exert control of proceedings once more; on the hour mark, Greenwood’s cross outwitted Arnold and clipped the crossbar on its way out.

Arnold was then called upon to show impressive reflexes as a deflected strike by Stanway from the edge of the area took a nick off a stray boot inside the area – but the Matildas’ stopper got down well to turn it behind.

The respite was only temporary. Greenwood’s delivery from the resulting corner went towards the near post – where Ellen White glanced the ball past Arnold.

Buoyed on, City added a fourth soon after when substitute Rose Lavelle pounced on a loose ball, drove into the area and curled over Arnold.

Despite a battling display, West Ham United will now need to rise to the occasion of a Continental League Cup semi-final, when they travel to Kingsmeadow to face Chelsea on Wednesday evening.