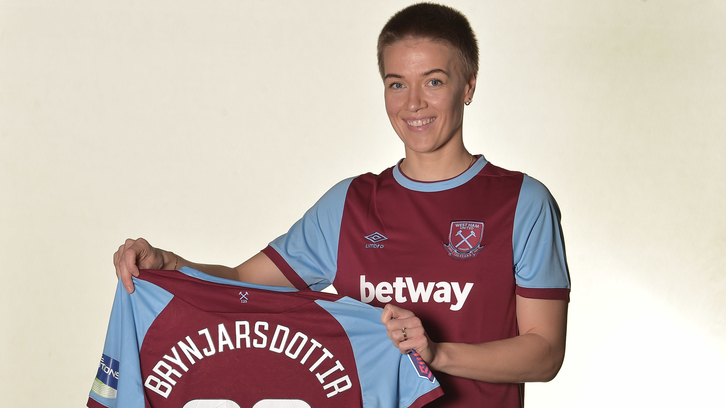 West Ham United are delighted to confirm the signing of Icelandic international Dagný Brynjarsdóttir from Selfloss.

The 29-year-old joins the Hammers on a one-and-a-half-year deal and will wear the No32 shirt, becoming manager Olli Harder’s first recruit since he joined the Club in December.

A lifelong West Ham United fan, the midfielder boasts a wealth of experience at international level, making 90 appearances and scoring 28 goals for her native Iceland.

It’s a dream to be joining the Club that I have supported all of my life. The team and staff have made me feel very welcome and I already feel at home here

“It’s a dream to be joining the Club that I have supported all of my life,” Brynjarsdóttir said. “The team and staff have made me feel very welcome and I already feel at home here.

“West Ham United has always been a big part of my life, so I can’t wait to get started and to help the team to reach the level we deserve.”

Brynjarsdóttir was born in the small town of Hella, situated just over 90km east of Iceland’s capital Reykjavík.

The Iceland international made a name for herself after moving to the USA to attend Florida State University. In a four-year career with the Seminoles, Brynjarsdóttir found the net 44 times in just 87 matches, breaking the University record for match-winning goals in the process, with 19. 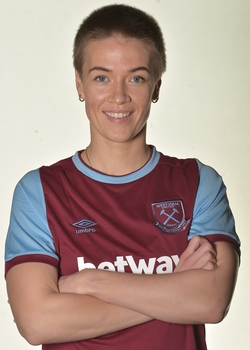 In her senior year back in 2014, the 'Noles were crowned National Champions, whilst Brynjarsdóttir was named a First-Team All-American and voted Soccer America’s Female Soccer Player of the Year.

Brynjarsdóttir dovetailed her college studies with senior football back in Iceland during the Collegiate off-season. The midfielder spent seven seasons with eleven-time Icelandic League champions Valur, winning four league titles and three Icelandic Cups with the Reykavík-based side.

After leaving Tallahassee in 2014, Brynjarsdóttir moved to Selfloss – for the first of three spells there – before swapping Iceland for Germany and signing with Bayern Munich in the Frauen Bundesliga.

Her time in Germany was short-lived, returning to Selfloss after just 12 months for a second spell at the JÁVERK-völlur stadium.

The 29-year-old’s exploits in College made a return to the United States inevitable and in 2016, Brynjarsdóttir joined up with the Portland Thorns ahead of the start of the NWSL season.

The midfielder spent three seasons in Oregon, scoring six times in 53 appearances, before taking sabbatical year in 2018 to give birth to her son.

After returning to football just over a year later, Brynjarsdóttir returned to Selfloss for a third time, netting four goals in 12 appearances during a 2020 campaign that ended with a 2-1 victory of Valur in the Icelandic Super Cup.

Dagný is a strong, athletic, dynamic midfielder and she will bring tremendous value on and off the pitch, and I can’t wait to see her thrive here at West Ham United

West Ham United women’s manager Olli Harder expressed his delight at the arrival of such an experienced and technically gifted player.

“I’m really pleased to have Dagný on board as our first January signing at West Ham,” he said.

“She aligns perfectly with our values and the team culture that we have begun to establish and create within this group of players.

“As a West Ham fan, she also has a built-in passion and understanding of the Club, which will be a huge asset to the team.

“Team changes are inevitable at this time, but I am really confident that we are moving in a positive direction both in the mid- to long-term, while making the necessary changes to start picking up more points and climbing the table in the short-term.

“Dagný is a strong, athletic, dynamic midfielder and she will bring tremendous value on and off the pitch, and I can’t wait to see her thrive here at West Ham United.”

Everyone at West Ham United wishes Dagný the best of luck for her time in Claret and Blue.