West Ham United booked their place in the FA Women’s Continental League Cup semi-finals with a convincing 3-0 win over Durham at the Chigwell Construction Stadium on Thursday night.

The win was Olli Harder’s first since joining the club in December, with the Hammers progressing to this stage in the competition for the first time in their history.

Emily van Egmond, Katariná Svitkova and Hawa Cissoko were all on target for the home side who were looking to bounce back from Sunday’s 1-0 defeat at the hands of Tottenham Hotspur.

It was Svitková’s first goal for the Club since swapping Slavia Prague for east London over the summer and the No10 was clearly delighted to get off the mark for the Irons.

“To score my first goal for West Ham United was such a great moment,” she said. “I’m so happy! Even though I don’t think that we were at our best tonight we managed to win and ultimately that’s the most important thing.

"I think it’s a really special for us to get through to the semi-finals of the Women’s Continental League Cup.”

The Hammers enjoyed the lion’s share of both the possession and the chances during the game and looked particularly potent down the left flank.

Svitkova’s goal came from a bursting Adriana Leon run down the left-hand side and from there the Czech midfielder knew it was about being in the right place at the right time. 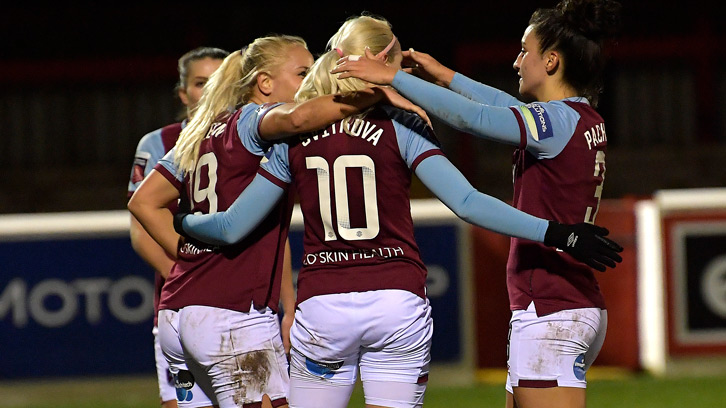 “It was a long ball forward and when that happens, I have to be ready to receive the ball across the box. Adriana (Leon) did an amazing job to beat her marker and pick the pass and then it was an open goal for me.”

The playmaker was also involved in Van Egmond’s opener, volleying the ball back into the box after the corner had initially been cleared.

“I felt a bit nervous in the first half, we didn’t start particularly fast, but after I got the assist for Emily van Egmond’s goal I calmed down a lot and played much better.”

During Olli Harder’s first match in charge against Tottenham Hotspurs, Svitkova was deployed at full-back but was switched into her more natural midfield role for Thursday’s quarter-final.

“The most important thing for me is to be on the pitch,” Svitkova continued. “I’ve said that to the coaches, I don’t mind what position they put me in, whether that’s in the midfield or out on the wing.

"We had injuries at left back on Sunday and I said ‘okay’ let’s do it, my natural position in No10 but I have no problem playing wherever is best for the team.

"I’m really excited to be working with Olli Harder. He reminds me of some of the coaches that I had growing up. The style is really good, and I really enjoy playing this way, I think we’ve already started to implement some of his ideas, and we can certainly look to build on that.”

The next challenge for Svitková and the West Ham United is a trip to Arsenal on Sunday in the Barclays WSL. West Ham’s No10 believes getting their preparation right will be key to improving their league form.

“It’s going to be great to play against Arsenal because they’re of course a great team. We’ll have to see how it goes, I think if we prepare correctly, we can make it difficult for them and compete as best we can.”

West Ham United travel to Borehamwood to take on Arsenal Women in the Barclays FA Women’s Super League on Sunday. Kick-off is at 12pm and you can keep a track of the action on www.whufc.com