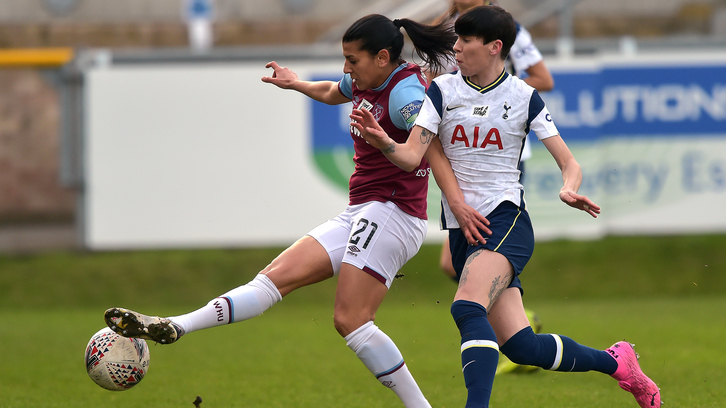 A first-half strike from substitute Lucy Quinn provd the difference between the two sides at the Chigwell Construction Stadium.

Emily van Egmond went closest for the Hammers with a headed effort in the second half, but the defeat leaves West Ham in tenth place in the WSL table after eleven games.

It was just eight minutes before the Hammers fashioned the first chance of the afternoon. A neat passing move in midfield saw Cho split the Tottenham defence with a lofted pass through to Emily van Egmond.

Van Egmond, deployed further forward by Harder, took time to steady herself, but her tame effort was easily gathered by Becky Spencer in the Spurs goal.

The Irons were assured in possession during opening exchanges, content to occupy the Tottenham half for long spells as they looked for the breakthrough.

In contrast, the visitors probed on the counter, attempting to find attacking duo Jessica Naz and Rachel Williams in the channels as much as they could.

Williams, unfortunately, only lasted 20 minutes before hobbling off with an injury, forcing Spurs manager Rehanne Skinner to replace the forward with Lucy Quinn.

Not long after Quinn’s introduction, Tottenham took the lead. A fizzed cross from the right-hand side evaded the Hammers backline and found Gemma Davison at an acute angle on the byline. The winger squared the ball back across goal to Quinn, who fired well into the corner past Mackenzie Arnold.

The Irons showed a renewed endeavour after falling a goal behind, but struggled to turn possession and pressure into chances before the break.

They did, however, make a fast start to the second period and were nearly level inside the first minute.

Martha Thomas seized upon a short goal kick from Spencer, and the Scottish international carried the ball into the box and cut it back across goal towards Adriana Leon. The striker, with her first touch after being brought on, tried an audacious backheel finish that Spencer was equal to.

Shortly before the hour mark, Spencer was once again called into action. Kate Longhurst steered a deep free-kick into the box, and it was met by van Egmond who climbed highest, but could only direct her effort straight at the Spurs stopper.

The Hammers showed much more quality in their second-half performance, pushing bodies forward at every opportunity, as they looked to find a way through the astute Tottenham defence.

Willed forward by Harder, West Ham had the visitors on the backfoot as the game headed into its closing stages. Thomas and Grace Fisk both went close with headers from successive set-pieces, but the home side still couldn’t find the equaliser they so richly deserved.

Caution was thrown to the wind as the game waned, however the visitor held on to take the three points.