Tomáš Souček earns spot in FIFA Team of the Week 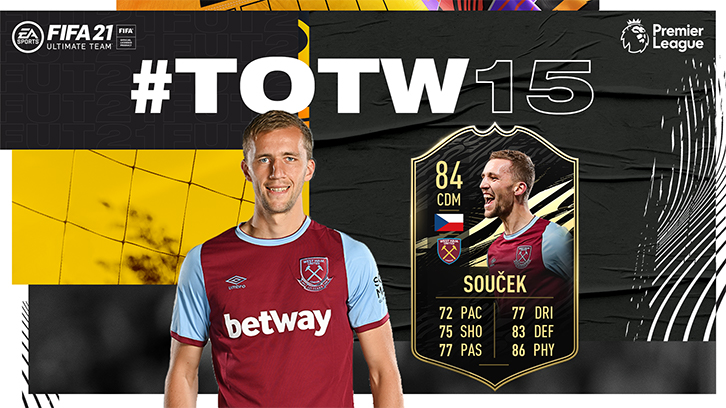 Tomáš Souček’s match-winning moment on Merseyside has helped the West Ham United midfielder claim a spot in the FIFA 21 Team of the Week.

The Czech Republic international displayed the kind of predatory instinct which has seen him rack up eight goals in just 30 games, with brilliant movement inside the area and a clinical finish in the 86th minute capping a 1-0 win against Everton on New Year’s Day.

Souček’s all-round display in the Hammers’ victory at Goodison Park saw the 25-year-old also produce two shots on target, win four aerial duels, make two interceptions and a successful tackle and enjoy 70 touches – the most of any player in Claret and Blue.

As a result, Souček becomes the fifth West Ham United player to be named in the FIFA 21 Team of the Week this season.

In keeping with teammates Jarrod Bowen, Lukasz Fabianski, Vladimir Coufal and Angelo Ogbonna, the midfielder has received an in-game Team of the Week ‘in-form’ card, boosting his overall rating within FIFA Ultimate Team up to a strong 84.

Already a popular pick for Premier League squads in the popular game mode, Souček’s FIFA card now boasts a defensive rating of 83 (up from 80) and physical attributes rated 86 (up from 83).

West Ham United fans will be able to collect his Team of the Week card in FIFA 21 Ultimate Team packs as of 6pm on Wednesday 6 January. The card will be available until 5.59pm on Wednesday 13 January.