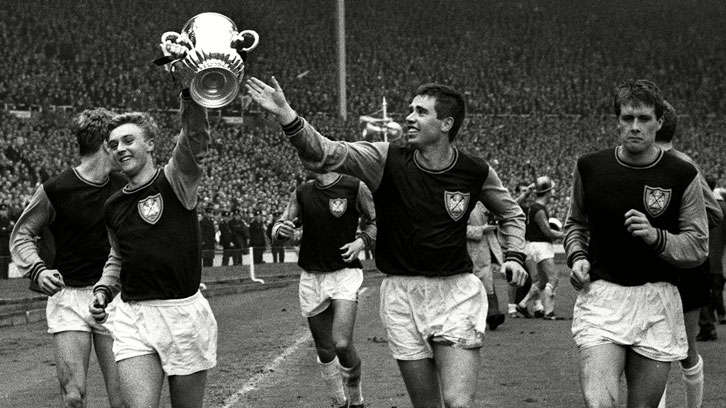 Only one player could have scored the goal that secured West Ham United the club’s first major trophy and that man was Ronnie Boyce, who celebrates his 78th birthday today.

It was tireless midfielder Boyce whose late header won the FA Cup for the Hammers at Wembley in May 1964, snatching a 3-2 victory over gallant Second Division challengers Preston North End.

While he was known better for his stamina, commitment and ability to break up opposition attacks, Boyce found the net a career-high eleven times during that historic 1963/64 season, with the last of those goals coming on an historic afternoon at the Home of Football.

Born just a short distance from the Boleyn Ground in East Ham in January 1943, Boyce joined West Ham as a schoolboy before making his first-team debut more than 60 years ago in October 1959 in a Southern Floodlight Cup win over Millwall, when he was just 16.

A year later, aged 17, he started a First Division match for the first time as the Hammers thrashed Preston 5-2. It would not be the first time he haunted the Lancashire club, of course.

After establishing himself as a first-team regular in 1962/63, Boyce played an amazing 55 matches the following season, climaxing with two goals in the famous FA Cup semi-final win over Manchester United at a rain-soaked Hillsborough, and his decisive header at Wembley six weeks later.

Nicknamed ‘Ticker’ due to his outstanding work-rate, Boyce and his teammates were back at the Home of Football in May 1965, when his interception led to Alan Sealey’s opening goal in the 2-0 European Cup Winners’ Cup final victory over TSV 1860 Munich.

By the time Boyce hung up his boots in 1972, he had played 341 times in Claret and Blue, scoring 29 goals. In November of the same year, he was awarded a Testimonial, which saw the Hammers thrash a Manchester United team including George Best and Bobby Charlton, 5-2 at the Boleyn Ground.

He became a key member of John Lyall’s coaching staff, helping the Hammers win two further FA Cups in 1975 and 1980, and later served as both caretaker manager and chief scout, retiring in 1995.

Boyce and his family relocated to Norfolk, but he returned to London in May 2019, when he was recognised with the Club's Lifetime Achievement Award, presented by his long-time teammate and fellow FA Cup and European Cup Winners' Cup winner Sir Geoff Hurst.