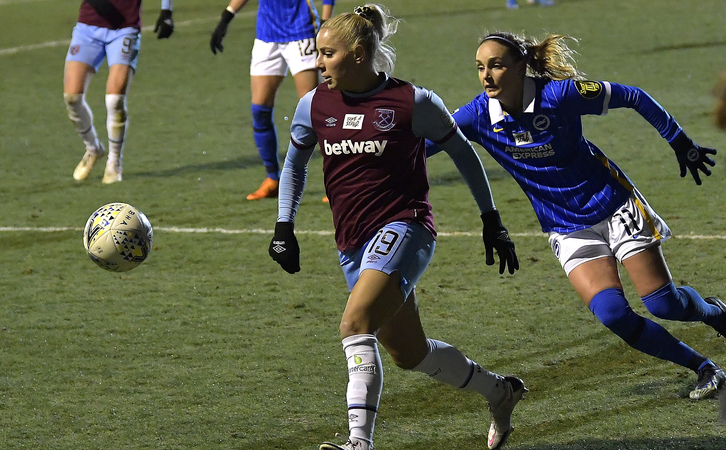 The Hammers had no response to Aileen Whelan’s first-half effort on a blisteringly cold night in West Sussex.

Laura Vetterlein went the closest for West Ham, driving a free-kick back off the crossbar shortly after falling behind.

The loss leaves Olli Harder’s side in 11th place in the WSL table, with just a two-point lead over Bristol City at the foot of the WSL table.

Brighton & Hove Albion started the brighter at the People’s Pension Stadium and had a glorious opportunity to take the lead after just ten minutes. A sweeping cross found Inessa Kaagman in space at the back post and the attacking midfielder slid the ball back to Nora Heroum on the edge of the box. The Seagulls No12 slipped as she shot, and Mackenzie Arnold was on hand to gather.

It was the hosts who continued to create the openings in West Sussex, Harder’s side were given a reminder of the threat Brighton pose from set-pieces after a quarter of an hour. The Irons defence failed to deal with a long throw from the hosts and Kaagman flashed her volley wide from close range when it looked easier to score.

To their credit West Ham United stuck to their task well and could have taken the lead themselves at the midway point of the first period. Maz Pacheco curled a corner into the Brighton box and Laura Vetterlein met it first at the front post. The German defender hooked her effort goalward over Megan Walsh in the Brighton net, but Geum-Min Lee recovered well to clear from underneath the bar.

Vettelein’s effort went some way to kickstarting the game into life. Moments later Arnold was called into action down the other end, the Australian ‘stopper producing a spectacular diving save to claw Heroum’s drive from distance round the post.

The pressure finally told on the Irons defence in the 31st minute. A string of corners went uncleared and Aileen Whelan was able to capitalise. The central midfielder found herself in the right place at the right time, firing through a crowd of bodies into the back of the net to make it 1-0.

The Hammers went in search of an immediate response after falling behind and enjoyed much more possession in the latter stages of the opening 45 minutes.

It was the woodwork that was next to thwart Vetterlein. Katarina Svitkova forayed forward and was clumsily fouled by Emma Koivisto down the right-hand side. Vetterlein stepped up to take the free-kick from the best part of 30 yards and whipped her effort onto the crossbar as the Hammers went agonisingly close just before the break.

It was the Irons who initially seized the momentum after the resumption. A long ball forward from skipper Gilly Flaherty caused confusion amongst the Seagulls backline, with Megan Walsh reluctant to come off her line and clear the danger. Pacheco looked to steal in for the Hammers but Koivisto came to the aide of her goalkeeper to hack clear.

Despite being spurred forward by their manager, further Claret and Blue chances proved few and far between. Vetterlein looked to feed Leon over the top on multiple occasions but it was to little avail.

The hosts sat back and were largely content to defend, soaking up any pressure West Ham United could muster and frustrating the lively forward duo of Thomas and Leon.

With little over ten minutes remaining the hosts had a huge chance to double their lead. Whelan’s chipped through-ball evaded the West Ham defence and left Ellie Brazil one-on-one with Arnold. The winger steadied herself on the edge of the box, waiting too long and allowing Vetterlein to get a toe to her goal-bound effort and deflect it wide.

As Harder’s side committed more and more bodies forward in search of a valuable equaliser, they left themselves increasingly open at the back.

With the game headed toward its conclusion, caution was thrown to the wind by the Hammers, but the hosts held on well to take the three points.