Ben Johnson: Manchester United defeat was definitely a tough one to take

Ben Johnson says West Ham United still have plenty to be proud of and a lot to look forward to, despite Tuesday's 1-0 Emirates FA Cup fifth-round defeat at Manchester United.

The Hammers were edged out on a freezing cold night at Old Trafford, where they were without Michail Antonio and Jesse Lingard and lost Angelo Ogbonna, Issa Diop and Andriy Yarmolenko to injury.

The goal came in extra-time after two clearing headers had fallen to Marcus Rashford, who laid off for Scott McTominay to shoot low past the previously unbeatable Lukasz Fabianski.

And the frustration and disappointment were compounded by the fact Johnson - and manager David Moyes - felt West Ham should have had a penalty when the left wing-back's cross hit Aaron Wan-Bissaka on the arm in the final minute of normal time.

Ben, that was a tough one to take with the way we defended and the scrappy nature of their goal...

"It's definitely a tough one to take. In the first half, we didn't really get into our rhythm as we have done over the last couple of months but in the second half I think we came out and the incentive was there because it was 0-0 and we were here to win.

"I don't think we have a fear of anyone, so I think the way we came out and played in the second half was positive.

"The goal was a bit scrappy. They were trying to get in round the back all night and it didn't come off and the one time it did, it was a scrappy goal and I think we were definitely unlucky to lose to this tie."

Should we have had a penalty right at the end of normal time when your cross hit Aaron Wan-Bissaka?

"I watched it back in there (the dressing room) and at the time I thought it was definitely handball and he was going to check it.

"I didn't really appeal too much at the time because I thought they [VAR Craig Pawson and referee Paul Tierney] would go and check it. His hands were up, so there is not much you can really argue about that.

"We had another one with Rashford that I think was unintentional so we were a bit unlucky and didn't get the breaks we deserved, but that's how the game goes sometimes." 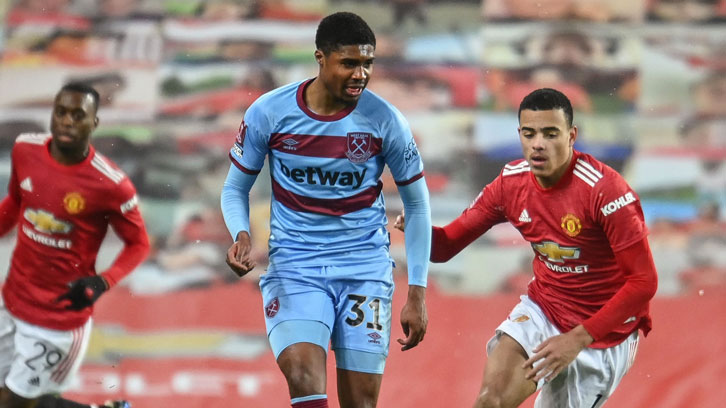 Manchester United have a big, strong squad with international players on the bench, so giving our all and losing 1-0 in extra-time when circumstances went against us on the night was no disgrace at all...

"The calibre of player they have got is immense but when we played them at London Stadium we controlled the game in the first half, were 1-0 up, could have had a second and had a goal ruled out for offside as well, then they brought on Fernandes and Rashford at half-time and changed the game.

"Of course they are a threat but I think we've got top players who can go toe-to-toe with them. As you can see where we are in the table after 23 games, we're up there with them, so as a team we believe we're good enough, so having that mindset is important.

"This was a game all the boys were relishing in this wonderful stadium and unfortunately we didn't get the win so we're disappointed with that."

And, of course, we are sixth in the Premier League and unlike in previous seasons, have plenty positive to play for over the closing months of the season?

"We're doing really well this season. The dressing room we've got helps so much with the characters we have got in there.

"The players we have got are top, top players and I don't think you realise the calibre of players we have - Dec is a top international player, we brought in Tomas, Vlad, Daws and Said, and we have Michail playing up front, and Cressy and Angelo are having top seasons, so we've got a lot of top players in our team.

"We go onto the next one on Monday. We bounced back from the Liverpool game against Villa, so we're just looking for that reaction again."