Tomáš Souček selected again for FIFA Team of the Week 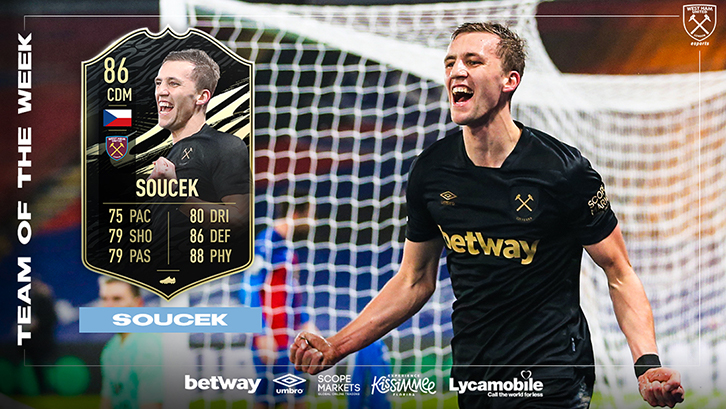 West Ham United midfielder Tomáš Souček's fine form has been recognised once again with a call-up for the FIFA 21 Team of the Week, his second selection since the start of 2021.

Having previously been included on Wednesday 6 January, Souček's influence in the middle of the park means he is again included in EA SPORTS' pick of worldwide players.

The Czech Republic international has been in remarkable form for the Irons since joining a year ago, racking up 11 goals in just 38 games - his total of 8 this season making him the Club's top scorer.

Souček also becomes the second Hammer in FIFA 21 to earn two in-form Ultimate Team cards in the same campaign, following Angelo Ogbonna's second inclusion a fortnight ago. Prior to that, the last West Ham player to accomplish the feat was Javier 'Chicharito' Hernandez in FIFA 19.

The 25-year-old's inclusion in the FIFA 21 Team of the Week was the seventh such occasion for a West Ham player this season, following on from previous 'in-form' cards for teammates Jarrod Bowen, Lukasz Fabianski, Vladimir Coufal, Angelo Ogbonna (twice), and himself.

As a result of his second inclusion, his in-form card is upgraded still further, with the midfielder's overall FIFA Ultimate Team rating now standing at a whopping 86 - the best West Ham card in the game so far.

Already a popular pick for Premier League squads in the popular game mode, Souček’s FIFA card now boasts a defensive rating of 86 (up from an initial base rating of 80) and physical attributes rated 88 (up from 83).

West Ham United fans have been able to collect his Team of the Week card in FIFA 21 Ultimate Team packs as of 6pm on Wednesday 3 February. The card will be available until 5.59pm on Wednesday 10 February.