David Moyes: We can look at the positives from the game

'
While David Moyes would have liked to have seen his players close out their two leads in Saturday afternoon’s 2-2 draw with Crystal Palace, the West Ham United manager felt they deserved credit for the standard of their performance.

The Irons were largely on top in a high-tempo first half which yielded few chances, save for Palace’s Joel Ward clearing off his own line from teammate Joachim Andersen’s misguided header.

Pablo Fornals capped the half by putting the seal on a fine team goal, but Palace would go on to twice equalise through Conor Gallagher in the second period, either side of Michail Antonio’s fourth goal in three Premier League games.

The result saw West Ham remain undefeated after three Premier League games and move back to the top of the table, albeit ahead of other teams’ games over the weekend.

We want to be greedy and we always want to try and get the three points.

We can look at the positives. There were lots of good things about the team and I’m relatively pleased with a lot of things the players tried.

We wanted to play well, and we didn’t play well in the second half today, but overall I’m pleased that we’ve taken something away from the game.

I thought some of our play in the first half was good, but it still didn’t reach the levels that we have reached in the first two games.

The goal was terrific – good patience, we waited on the right moment to get the ball in the net, so I was pleased with that.

I thought there were other chances in the first half when we came close to getting a second goal, we just weren’t quite on it in the final third. We weren’t quite as on it the whole game – not as much as we have been in recent matches. 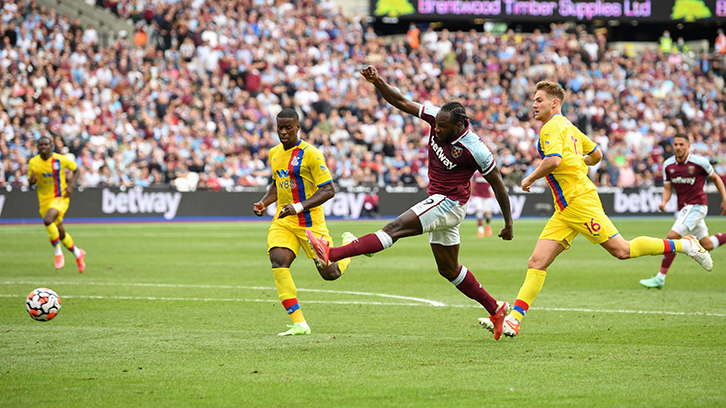 I didn’t think it was Michail Antonio’s best game but when your striker scores a goal, I think it can make a big difference.

He had an assist in the first too. A lot of that was good, but there were other parts of the game I’d have liked for Mich to have done better.

Crystal Palace’s second equaliser [soon after our second goal] was the frustration, but it’s going to happen. I’ve not been pleased with the way we’ve defended in some of the games and some of the reactions we’ve had, and today was one of them.

The crowd have been terrific for us this week.

The players have also been great, and if you’re not getting behind them today, when would you ever? We’ve just been drawn in the UEFA Europa League. We went into this game top of the league, so if you weren’t going to support your team today, you never would.

We wanted nine, but I think if you’d have said beforehand we’d take seven points in our first three games, I think we’d have taken that.