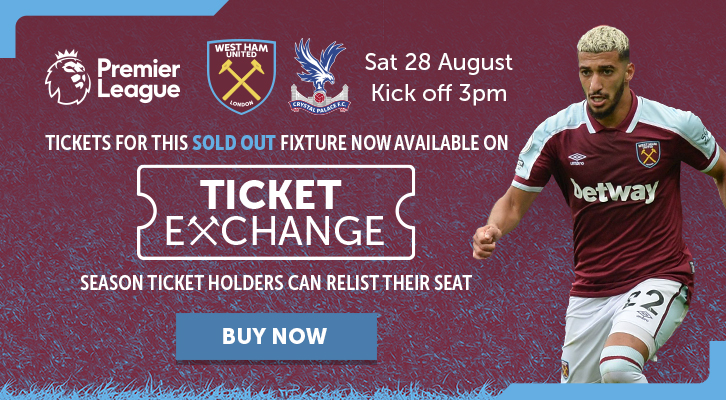 West Ham United are thrilled to be welcoming another 60,000 capacity crowd back to London Stadium for Saturday’s sold-out London derby against Crystal Palace.

Following the exhilarating 4-1 victory over Leicester City on Monday night – which took the Hammers to the top of the Premier League table – David Moyes’ men will be looking to maintain their 100 percent start to the campaign when they take on the Eagles in the 3pm kick-off.

Yet again, the Claret & Blue Army have shown their passionate and loyal support for the Hammers by snapping up every ticket available for the visit of Patrick Vieira’s side, so just like on Monday, it promises to be another fantastic atmosphere in London Stadium.

If you haven't yet secured your ticket, you may still have time to do so, with tickets becoming available for the meeting with the Eagles as Season Ticket Holders who cannot make it relist their seats.

Supporters can purchase their seats on the Ticket Exchange, while Season Ticket holders who cannot make this match can also relist their seat, allowing fellow fans the chance to be at the game.

The Ticket Exchange will remain open until 1pm on Saturday, two hours before kick-off.

Meanwhile, tickets are now on General Sale for the unmissable Premier League clash with Manchester United at London Stadium on Sunday 19 September.

The Hammers have enjoyed some memorable days against the Red Devils at London Stadium in recent times, winning 2-0 in the 2019/20 campaign and 3-1 the year before.

Tickets are selling quickly, so make sure you don’t miss out by securing your seat today – click here to purchase now!

Give yourself the best chance of making sure you’re there for all the moments that matter by joining the Season Ticket Priority List today.

Only Season Ticket holders are guaranteed to see each season’s memorable moments, and those lucky enough to have one for the 2021/22 campaign will get priority access to a minimum of three mouth-watering European nights in the UEFA Europa League and be there for captain Mark Noble’s emotional 18th and final season in a Claret and Blue shirt.

You can give yourself the opportunity of joining them by signing up for the Priority List for just a £10 deposit, redeemable against your first offer of a Season Ticket – get on the Season Ticket Priority List today by clicking here or call us on 0333 030 1966!