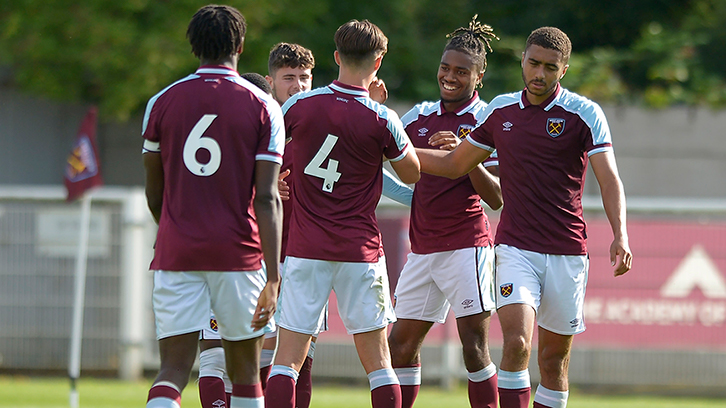 The first competitive fixture of the 2021/22 season at London Stadium pits West Ham United U23s in a London derby against Arsenal U23s on Monday 16 August at 7pm – and tickets are now on sale!

The huge match, which West Ham United Season Ticket Holders and Claret Members can attend for free, sees the young Hammers look to get their Premier League 2 Division 1 campaign off to the best possible start against the junior Gunners.

Dmitri Halajko’s development squad memorably secured four points off Arsenal in their final two games of 2020/21 – including a last-gasp, dramatic 2-2 draw on the final day of the season.

Looking to push up the table this time around, West Ham’s U23s have been in free-scoring form in pre-season, netting 18 goals in just seven games over the summer.

Playing in front of a home crowd means a huge amount to the future stars of the Academy of Football, who last enjoyed the presence of the Claret and Blue Army in March 2020.

Players and staff alike would cherish having your support inside London Stadium for the crucial season-opening game.

We would encourage Season Ticket Holders and Members to book in advance of the game - either online or by phoning the ticket office (0333 030 1966) - to receive e-tickets ahead of the fixture. Bookings on the day will also be welcome at the ticket office windows adjacent to the Club Store.

For non-members, tickets are priced at £5 for Adults and £3 for Concessions/Under-16s. Click here to book.

Away Sales are to contact the ticket office by phone only on 0333 030 1966, where they will be allocated into their dedicated seating area.

Accessible tickets will be issued with a free personal assistant ticket. For bookings, please call our accessibility line on 0333 030 0174.

Ashby: I’m happy to land straight back on my feet

Halajko: U21s stood up to the test and surpassed it

Baptiste and U21s set for must-win game at Gillingham

Okoflex: The scoreline reflected our performance