Saïd Benrahma: I hope we can carry on like this

Saïd Benrahma is hoping to continue his eye-catching pre-season form into the 2021/22 campaign.

West Ham United’s Algerian attacker put in a Man of the Match performance in Saturday’s 2-0 Betway Cup win over Italian side Atalanta, providing both assists, hitting the crossbar with a rasping volley and generally providing a threat every time he got on the ball.

The No22 had previously scored outstanding goals in the victories at Celtic and his former club Brentford, and hopes are high among the Claret and Blue Army that Benrahma can reach a new level of performance.

With West Ham competing on four fronts this season, including a first-ever UEFA Europa League group-stage campaign, the 25-year-old is relishing the opportunity to show what he can do at home and abroad.

I hope we can carry on like this, we’ve had a good pre-season so let’s hope to keep it up!

“It was a really good match on Saturday,” he told West Ham TV. “We played well, we managed the game well and we scored.

“I’m very happy to have helped the team with this performance. I hope we can carry on like this, we’ve had a good pre-season so let’s hope to keep it up!

“I’m gaining confidence and hope to carry on doing so. Next time I hope to score as well!”

Benrahma was influential against an Atalanta side who are preparing for a UEFA Champions League challenge after securing a third consecutive top-three Serie A finish last season.

After hitting the woodwork with a rasping effort, he played in Michail Antonio for the opening goal on the stroke of half-time, cushioning a perfect through ball over the Atalanta defence.

Benrahma then went close with another shot from outside the box after half-time before inadvertently setting up the Hammers’ clincher a minute from the end, when his diving header was diverted into the roof of the net by Pablo Fornals.

“[For the first] I saw Mikey (Michail Antonio) break away so I followed and I tried to deliver him a good ball,” he recalled. “I thought about shooting, but then I said to myself: ‘No, he’s in a better position’, so I made the pass.

“[For the second] I went for the ball, Pablo followed up and did a great job by finishing the chance!

“I felt that they were two great goals.”

Benrahma puts his performances down to the fact he has enjoyed a full pre-season with West Ham, having joined the Club from Brentford last October, when the Irons were already a month into the Premier League campaign.

“I prepared myself well for the pre-season,” he confirmed. “I’ve tried to properly prepare myself physically, I feel good. I think that’s what was missing for me last year.

“I’ve had a good pre-season and I hope to continue in this way.” 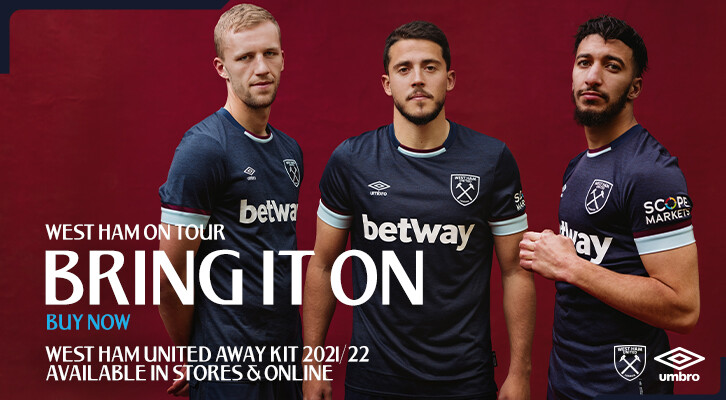