Tomáš Souček: We still have a big chance of reaching Europe 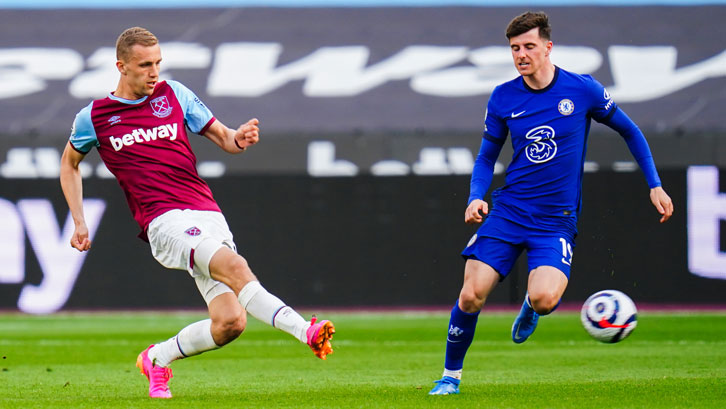 Souček went closest to scoring for the hosts, but his goal-bound shot was blocked on the line by Cesar Azpilicueta, with the ball hitting his chest before clipping his arm, and the Irons’ disappointment was compounded by a late red card shown to Fabián Balbuena for catching Ben Chilwell after clearing the ball upfield.

However, despite losing, West Ham remain fifth and European qualification is still in the Irons’ own hands.

“It was a tough game for us,” the Czech midfielder reflected. “We wanted to win because we were playing at home and we have a very good record at home. We wanted to be back in the top four again, it’s our dream, so we were disappointed with the result.

“It was hard, and we didn’t create many chances. I had one shot in the first half which VAR could have checked for handball as it was going to the goal, but in the second half we started well and this is the way how we would like to play.

“We said in the changing room after the game that we should have played from the start like we did from the start of the second half. It’s a shame for us, but we were still only 1-0 down and we could have scored and drawn or even won.

“It’s a shame, but still I think that we played better in last 20 minutes, but the red card made it harder again.”

When asked for his thoughts on Balbuena’s sending-off, which was confirmed by referee Chris Kavanagh after VAR Peter Bankes asked the official to view the incident on a pitchside screen, Souček felt the Paraguayan was hard done by.

“I saw it in the changing room after the game and we all thought it was a harsh decision, so we are not happy about it, because he only kicked the ball out and their player stayed in front of him, so I don’t understand it, but it was bad for us,” he commented.

Next up for West Ham is a trip to Burnley on Monday 3 May, by which time the Hammers could have been overtaken by the three teams below them – Liverpool, Tottenham Hotspur and Everton – but Souček is not about to give up the fight for a European place.

“It’s great that we can compare ourselves to teams like Chelsea and the other teams around us,” he said. “We have five games until the end and we still have a dream to be in as high a position as possible.

“We want to prepare for the next game and I hope we still have a big chance.”