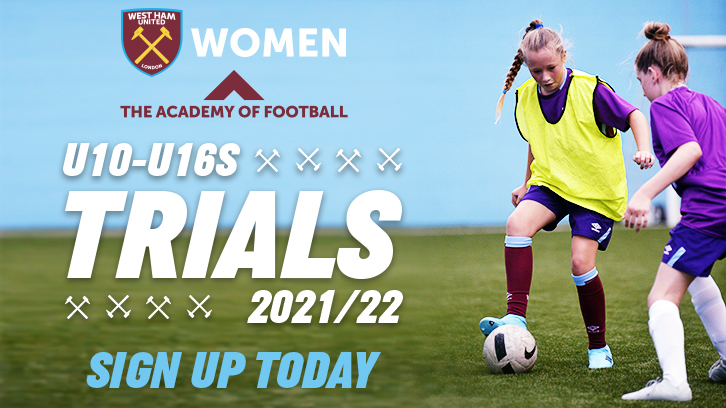 West Ham United Women’s team is delighted to confirm that the Club is accepting applicants to attend Academy trials throughout July!

During the 2020/21 season, five West Ham United academy graduates have made the set-up to play for the first team, including this past weekend as Maisy Barker and Anouk Denton made their first starts in the Vitality Women's FA Cup, while 17-year-old Janaye Beaufort also made her Claret and Blue debut!

To register your interest in the Academy trials, please click here!

The West Ham United Academy is one of the most highly recognised in global football, and three sessions have been added to the calendar for girls between 10-16 years-old to attend a trial with the Hammers.

Please note that trial dates are subject to change and, due to expected demand, applicants are permitted to attend only one trial.

To register your interest for a West Ham United WSL Academy trial, please follow the link here and fill out all the required information!

Interested in becoming a West Ham United Women's Season Ticket Holder? Register your interest by clicking here or on the graphic below!