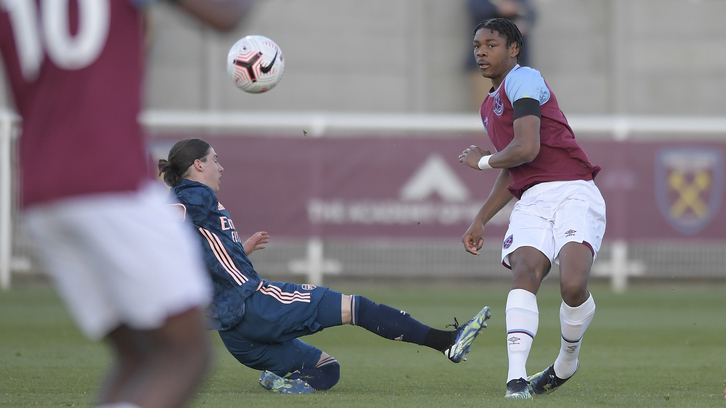 West Ham United U18s' FA Youth Cup campaign drew to a close in the fifth round with a 3-1 defeat at the hands of Arsenal U18s at Rush Green Stadium on Friday evening.

Goals from Omari Hutchinson (2) and Khayon Edwards were enough to see the Gunners through in east London, despite Divin Mubama’s late effort.

Kevin Keen’s side were playing at this stage of the competition for the first time in nine years after overcoming Luton and Norwich City in the previous rounds.

West Ham United began the game on the front foot and were nearly ahead inside five minutes. Archie Woods pounced on a loose ball in the Arsenal midfield and fed Kai Corbett on the edge of the box. The forward turned well but saw his shot skid narrowly wide.

As both sides settled into a rhythm, it was Arsenal who began to dominate possession and ramp up the pressure on the young Hammers defence. The visitors looked to exploit the space beyond the two fullbacks, keeping Jamal Baptiste and Michael Forbes honest throughout early exchanges.

The young Gunners failed to turn their early possession into clear-cut opportunities however, their best effort coming from their captain Alex Kirk, whose header went narrowly wide from close-range.

The hosts were content to soak up the pressure and look to hit their opponents on the break where possible, and it nearly paid dividends when Kamarai Swyer pinched the ball from the Arsenal backline. The forward drove forward but overran the ball and his deflected effort fell tamely for Ovie Ejeheri in the Arsenal goal.

Shortly after, Arsenal took the lead with their first effort on target of the night.  A neat spin and drive from Miguel Flores saw the midfielder burst into space in the West Ham half and release Omari Hutchinson in the box. The winger composed himself, rode a challenge and fired low past Krisztian Hegyi to give Arsenal the advantage.

The Hammers responded well to going behind and began to probe and hold onto the ball for extended periods without really forcing Ejeheri into a meaningful save.

The spell of West Ham pressure ran right up to the break with Baptiste going closest to equalising for the home side with a header from a corner that sailed over the bar.

Moments after the resumption the visitors doubled their lead. West Ham failed to clear their lines and the ball dropped back to Hutchinson 30 yards from goal. The forward drifted inside and swept his shot against the post. Rather fortuitously the ball ricocheted straight into the path of Edwards who made no mistake, doubling the Arsenal lead.

Despite an increasingly difficult task, Kevin Keen’s side didn’t let their heads drop and immediately went in search of a goal to get them back into the fifth-round clash.

Positive play from Mipo Odubeko saw the Hammers venture beyond the Arsenal backline but an advancing Corbett failed to convert after the striker had squared.

To their credit, Arsenal continued to show their cutting edge whenever they entered the final third. The Gunners nearly made it three when Henry-Francis once again took aim from range, and only the post was on hand to save the young Hammers' blushes.

As the game entered the final 20 minutes, West Ham threw caution to the wind. Forwards Amadou Diallo and Divin Mubama were introduced to try and turn the tide, as the Irons looked to reduce the deficit.

A quick counterattack from Arsenal led to Hutchinson being played through on goal. The striker bared down on Hegyi but, as he looked to pull the trigger, he was felled by Baptiste in the box. The referee pointed to the spot and was left with little choice but to dismiss the defender as the last man.

Hutchinson picked himself up with minimal fuss and converted the penalty low under Hegyi to ensure it would be Arsenal heading to the quarter-finals of the FA Youth Cup.

West Ham, however, did manage to get a goal back, when Odubeko capitalised on a sloppy back pass from the Arsenal defence and laid the ball onto Mubama to finish. The striker stretched and his effort squirmed through the goalkeepers’ arms to make it 3-1.

A deserved goal for their efforts on an otherwise difficult evening, Arsenal were ultimately good value for their spot in the next round. Krisztian Hegyi made two superb acrobatic saves in the closing stages as West Ham ultimately bowed out in the FA Youth Cup fifth round.