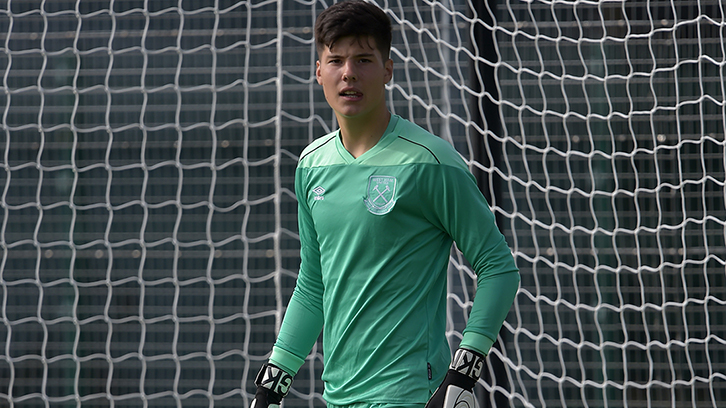 A much-changed West Ham United U18s side suffered a 5-1 loss away at league leaders Crystal Palace U18s on Wednesday morning.

Palace took a 2-0 lead inside the first half when a seventh-minute David Omilabu penalty was added to by Jack Wells-Morrison's sharp finish.

Whilst Amadou Diallo was able to respond for West Ham with a spot-kick of his own just before the break, Palace raced away in the second half, Omilabu completing a close-range hat-trick – including another penalty – before Daniel Quick completed the scoring for the home team.

With a number of youth team scholars in action during the U23s' 1-1 draw against Chelsea U23s on Tuesday night, U18s lead coach Kevin Keen made five changes to his starting eleven for Wednesday's trip to Crystal Palace Academy.

His team got off to an encouraging start when Junior Robinson’s accurate cross found Divin Mubama inside the penalty area but – aware of the need to generate power with his header – his effort went wide of the mark.

Moments later, Crystal Palace took the lead. Some clever footwork inside the area by Jerusun Rak-Sakyi allowed him to turn and go over Michael Forbes’ out-stretched leg; David Omilabu sent Krisztian Hegyi the wrong way from 12 yards to give his team the lead.

The Hammers regrouped and almost produced an immediate equaliser, with Sonny Perkins heading wide at the near post from a whipped Diallo free-kick delivery.

Gael Kileba had the next chance to shoot for West Ham, a neat step-over affording him space to shoot on his left foot – but his low effort failed to trouble Palace 'keeper Joseph Whitworth.

Up the other end, a fine Levi Laing block denied Wells-Morrison, before Mubama made a timely intervention from a set-piece to cause Omilabu – bearing down on goal – to miscue in front of goal.

The remainder of the half seemed like it would pass by without another clear-cut chance, as West Ham's possession game nullified the pacy counter-attack of their opponents – but then, on 39 minutes, the home team extended their advantage.

Rak-Sakyi showed superb feet to dance by his marker, reach the byline and pull the ball back for Wells-Morrison to slip the ball into the bottom corner.

A 2-0 deficit was a harsh reflection on the half, but the Hammers restored a measure of hope two minutes before half-time when – moments after Kileba had blasted over from close range following a fine Diallo run and cross – they claimed a goal back through a penalty of their own.

Another adventurous run from Diallo – only recently restored to the side following a long-term injury – led to the England youth international being barged over inside the area, and the No7 dusted himself down before blasting the spot-kick past Whitworth for his first goal of the season.

Having given themselves that platform, the Irons started the second half brightly, Mubama’s fine hold-up play setting Diallo away down the left. The winger's low cross was met by Perkins, whose effort caused a double ricochet which almost put the ball on a plate for Mubama, but it narrowly evaded the striker.

Once again, however, Palace scored early in the half to kill that early momentum off; Hegyi was second to a long ball in behind for Omilabu, fouling the forward, who converted the resulting penalty with a precise effort.

With a two-goal advantage, the hosts took command of the game, adding a fourth goal just five minutes later when two blocked shots saw the ball fall invitingly for Omilabu to blast home his hat-trick goal amidst a scramble inside the six-yard area.

West Ham’s territorial advantage grew as the half wore on, but – despite pushing the hosts back into their own box for lengthy stretches and having a couple of decent efforts from Perkins denied – Palace completed the scoring a minute from time, defender Quick stabbing home a loose ball from a free-kick.

Assistant coach Mark Phillips reflected: “In the first half, although we were 2-1 down at half-time, I felt we were the better side, funnily enough.

“We had more possession and passed the ball round the pitch very well. Palace were very good in and around the area, but I thought we were still well in the game and the next goal would be the important one – as it proved to be.

“Last week, we were well beaten against Fulham – we were outclassed. It wasn’t like that today – it was a good game of football, and they were just clinical when we weren’t.

“It’s a lesson that Kevin and I keep reiterating: you’ve got to take your chances. It’s an old cliché, but goals change games, and we didn’t take our chances to change the result today.”

As for the youth in West Ham’s ranks, Phillips added: “It’s not an excuse, but we were up against a much older team today of largely second-year scholars.

“It stands us in good stead for the future, giving young players experience, and makes them more likely to get through the U23s and into the first team, so it’s always a balancing act when you’re working with youth team players.”