The young midfielder, who captained the Hammers’ U23 side to Premier League 2 Division 1 safety last season before earning his first senior Republic of Ireland call-up, showed his ability and maturity again at Sixfields Stadium.

Playing alongside captain and experienced Argentina international Manuel Lanzini and Academy of Football teenager Keenan Forson in midfield, Coventry shielded his defence, used the ball intelligently and got forward to good effect, most notably when he collected Lanzini’s pass and fired a left-foot shot into the bottom corner on 13 minutes.

By then, West Ham had already gone ahead through Sid Nelson’s own-goal and, despite tiring in the second half as the home side replaced all ten outfield players, the Irons saw the game out professionally to secure their first win of the 2021/22 campaign.

Competition for places means the 21-year-old, who spent part of the 2019/20 season with Lincoln City in League One, may go out on loan again this season to gain more valuable senior experience. Whatever his future holds, the hard-working Coventry will continue to give his all.

Conor, that was a really good game of football, considering we’re only ten days into pre-season…

“Yeah, we’re obviously improving our fitness and getting better as a team but the performance in the first half was really good. The second half was OK as well but we maybe tired a little bit, but that’s what it’s all about so it was a good night for the team.”

Was it nice to play in there with someone like Manu, who moves the ball so quickly?

“From the first game up in Dundee, he just seems to have gone up a level again. He looks really sharp and again in training he’s so hard to stop, so he’s looking really good at the moment.” 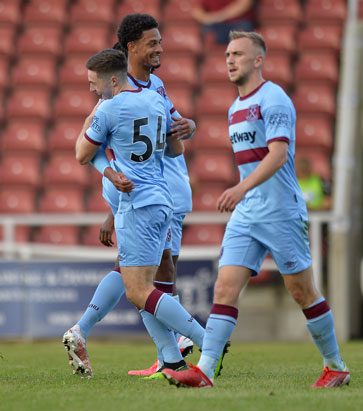 Stuart Pearce reported back to the manager David Moyes that he was pleased with the players here tonight and, as someone who regularly captains a team, how do you feel we played?

“They were a bit fresher than us in the last half-hour but Pearcey said to us that at any level it’s tough to win football games and that’s what we’ve done tonight and it’s a good 90 minutes in the legs for a lot of the lads, so a good night.”

We also shouldn’t forget you scored the winner!

“Yeah! Manu set it to me and I was going to hit it but I put it onto my left and had a swing and luckily it went in, so it’s a nice feeling. I’ll take it!”

There is a lot of competition for places and when you finish sixth in the Premier League, you know the standard required is very high, so how do you assess your own situation? You’ve been on loan before and you’re still only 21…

“I’m at a stage where I really want to play games at the moment. Competition in the squad is so high, as you said, and the two boys at the Euros [who play in my position] were excellent. I thought Dec was probably the best player on the pitch the other night in the final, and you’ve obviously got Nobes who is a legend and still so clever and so good on the ball and I’ve already spoken about Manu so it’s tough [to break into the first team]. I’ll see what happens, I’d like to get some games, keep learning and put myself in the best position I can.”

Whatever happens, you’ll keep working to impress the coaching staff, as that cannot do you any harm?

“The coaching staff are all great. I can sit down with all of them and ask them how I can get better and they’ll do stuff with me and watch my clips. They’ve been a real help to me since my last loan and I’ve really enjoyed working with them all.”