Michail Antonio: We can build on Saturday's performance 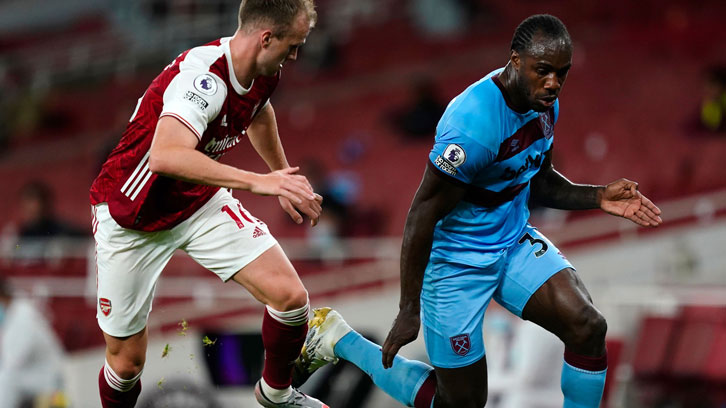 The No30 took his superb run of form to nine goals in his last nine Premier League appearances on Saturday with a well-taken equaliser at Arsenal, only for a late Gunners winner to leave the Hammers empty-handed.

With Wolverhampton Wanderers scheduled to visit London Stadium on Sunday evening, Antonio is determined to hit the net again and secure the Irons’ first points of the 2020/21 season in the process.

“We’re definitely very disappointed,” he told Premier League Productions. “Saturday was a good opportunity for us to get some points on the board, but it’s just one of those things and part and parcel of football, really, that if you don’t take your chances, you get punished.

“It was a great team effort and it showed the quality we have got in the squad, and hopefully we can take the confidence from all the good stuff we did on Saturday into next week.

“Hopefully, we can build on the performance we did on Saturday. We had 14 chances and, on another day, we could have scored two or three more goals and won.” 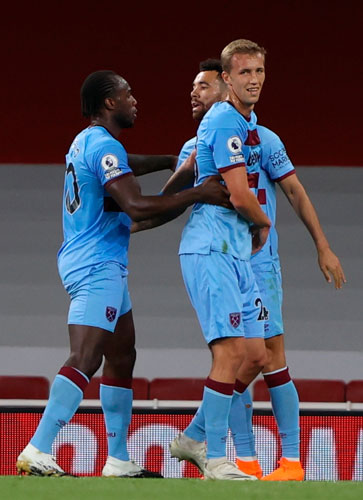 Antonio’s goal means he has now scored in four consecutive top-flight away games – the first West Ham player to do so since Frederic Kanoute in 2000/01, and is now joint-fourth in West Ham’s list of Premier League all-time goalscorers.

So, what has been the secret to his outstanding form in front of goal?

“I don’t know, to be fair?” he conceded. “Saturday was a great team goal. The ball out from Jarrod to Ryan and from Ryan to find me, I couldn’t miss, so hopefully I can get a few more in the weeks to come and we can get some more points on the table.”

While there was no debate about Antonio’s goal, there was about West Ham’s appeal for a first-half penalty for handball against Arsenal centre-back Gabriel.

Neither referee Michael Oliver nor VAR official Chris Kavanagh deemed an offence had been committed, with the ball judged to have hit the Brazilian on the shoulder, rather than the arm, in line with new Premier League laws.

“It’s such a big ball, so it’s difficult to judge. I’m not going to comment if it was a pen or not but it was a hard one to take because we thought we could have got three points, so leaving with nothing was painful.”