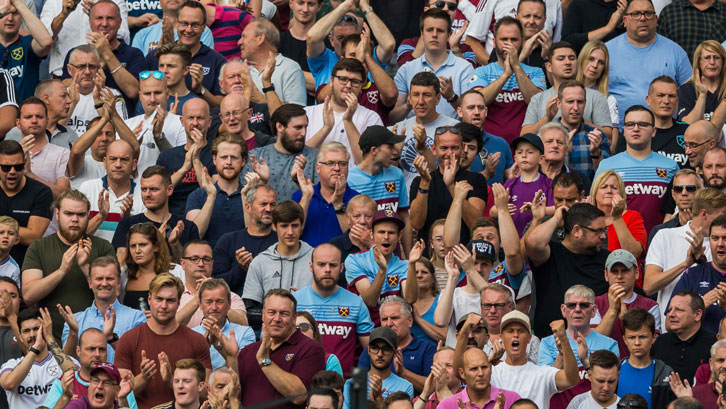 West Ham United is pleased to confirm that 88% of ALL Season Ticket Holders have now renewed for the 2020/21 Premier League campaign.

As Wednesday’s 5pm deadline passed, the overwhelming majority had taken one of the three renewal options available, to ensure that they will be among the first supporters back at London Stadium once spectators are permitted to return.

At this unique time, the Club would like to express our sincere thanks and gratitude to all of our Season Ticket Holders, who have once again demonstrated their tremendous loyalty to West Ham United.

Our Ticket Office staff have spoken personally to many thousands of our supporters in recent weeks and months, ensuring that all individual circumstances and situations were considered, and enabling Season Ticket holders to guarantee their seat as and when they are allowed, or feel ready, to return. We thank fans for their patience and co-operation throughout the renewal period.

With the renewal deadline now passed, seat relocations have started. The opportunity for seat relocations will be subject to availability and Season Ticket Holders requesting to relocate will be given a priority window to contact the Ticket Office as previously stated in order of date of renewal, with those supporters in Block 130 and in the Sir Trevor Brooking Stand and Bobby Moore Stand Lower tiers receiving the first priority following the stand reconfiguration.

The incredibly strong renewal rate leaves only a very small number of Season Tickets before the Club would reach its cap. We will continue to work in line with the current Government and Sports Ground Safety Authority guidance regarding the return of supporters to London Stadium, however, fans who have been patient at the top of the Waiting List can rest assured that the Club will be in contact once again in due course.

While we are unable to provide an exact timescale on the proposed return of our fans at present, the Club’s number one priority is to enable as many Season Ticket Holders to attend the maximum number of games as safely as possible.

In the meantime, we will be increasing our direct communications with all Season Ticket holders to ensure they are kept regularly informed and updated of any developments, across our digital channels and platforms, and in person via our Ticket Office staff. Following supporter feedback, we will also be revamping fans’ information on whufc.com, so that the detail about the return to London Stadium is simple, concise and easy to digest.

Given the uncertain circumstances, the renewal rate is particularly phenomenal and testament to the Club’s Season Ticket Holders commitment to West Ham United. We look forward to welcoming you back to London Stadium as soon as possible.