Joseph Anang: Under-23s will bounce back from defeat 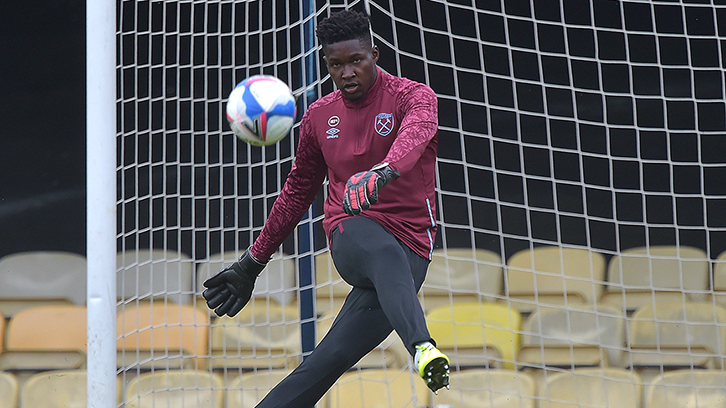 The taste of defeat is not one West Ham United Under-23s have had to experience too frequently in recent months, but goalkeeper Joseph Anang wants to channel Monday afternoon’s loss at Chelsea towards a more efficient next performance.

The Irons suffered their first Premier League 2 defeat in almost 18 months against title-winners Chelsea on Monday afternoon, losing 1-0 late on at Kingsmeadow.

Having put in a performance of hard graft and, for long spells, good quality on the ball, West Ham were ultimately made to pay for their profligacy in front of goal when substitute Dion Rankine broke their lines to slot past Anang with just under 15 minutes remaining.

Yet while West Ham enjoyed plenty of chances – particularly as they poured forwards in search of an equaliser – it was only thanks to some heroics from Anang that Chelsea’s breakthrough only came so late on.

Having saved a penalty in the 3-1 win over Southend United last week, the England U20 international made a series of fine stops at the beginning of the second half against Chelsea, the best of which saw him turn Tino Livramento’s curling effort onto his far post.

Speaking after the game, Anang was frustrated that his team couldn’t capitalise on their own spells of domination, challenging his teammates to make an immediate recovery at Tottenham on Friday afternoon.

“Obviously as a keeper, my job is to just protect the goal – I was just doing my job really,” Anang told whufc.com. “That’s why I’m there. I think I did alright today, but I want to move on now.

“To be honest, I feel frustrated because we had a couple of chances in the first half and the boys did well, we just didn’t take them. In the second half, we had three or four chances where we should have at least scored one or two.

“We just didn’t on this occasion, so maybe today wasn’t our day. That’s the game. You win some, you lose some. We’ll just go back to the training ground, work hard and move on. That’s all we can do.”

The match-up at Kingsmeadow was West Ham’s first Premier League 2 Division 1 game of the season, having won promotion from Division 2 last year.

Coming away at last season’s champions Chelsea, it could have been considered an acid test for the Hammers’ top-flight credentials ahead of the upcoming remaining games.

In this game, it’s not always about playing well – it’s about scoring goals, so if you don’t, you can’t win. If we go to Spurs on Friday and take our chances we'll get three points

That West Ham pushed Chelsea all the way, therefore, speaks volumes about the talent within the squad – and Anang just wants to see one final element added to his team’s performance against Spurs on Friday.

He declared: “If we can take our chances on Friday, we can get a result.

“In this game, it’s not always about playing well – it’s about scoring goals, so if you don’t, you can’t win. If we go to Spurs on Friday and take our chances we’ll get three points or at least a draw out of it.

“We need to keep working very hard, and see what happens.”

West Ham United Under-23s’ next Premier League 2 match is away at Tottenham Hotspur Under-23s on Friday 18 September in a behind-closed-doors fixture. Kick-off is at noon; you can follow all the action with our live blog on whufc.com from 11am.