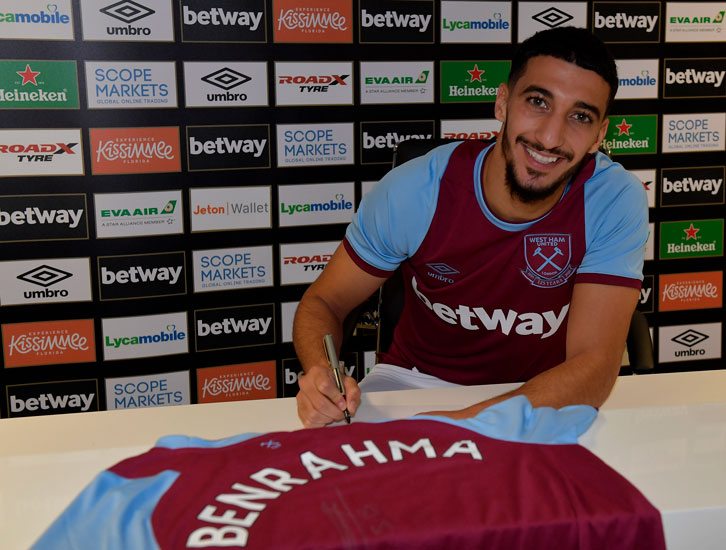 West Ham United is pleased to announce the signing of Algeria international Saïd Benrahma on loan from Brentford.

The exciting attacker joins the Hammers from the EFL Championship club on an initial season-long loan deal, with an agreement to make the transfer permanent.

A unique talent capable of unlocking any defence and scoring spectacular goals, Benrahma excelled during two sensational seasons for the Bees, scoring 30 goals and assisting 27 more. Now, the 25-year-old will have the opportunity to show his full range of abilities in the Premier League, and will do so in a Claret and Blue shirt.

I spoke to the manager, so I know exactly what he expects from me. I’ll try to meet his expectations on the pitch because he’s put faith in me and hopefully I can give it back on the pitch

“I’m very, very happy to be a part of this team,” said the Club's new No9. “West Ham is a historic club, which has been in the Premier League for a very long time. It included and still includes good players. It’s a massive club in England.

“I spoke to the manager, so I know exactly what he expects from me. I’ll try to meet his expectations on the pitch because he’s put faith in me and hopefully I can give it back on the pitch.

“I like this prospect [of playing in the Premier League]! I play football to enjoy myself first and foremost, but it’s always enjoyable to know you’re joining the most-watched league in the world, so I’m definitely looking forward to showing what I can do.”

Manager David Moyes welcomed Benrahma to London Stadium and said he will bring something totally different to an already strong and versatile West Ham squad.

“I’m delighted to welcome Saïd to West Ham United," he confirmed. "He is a player who has had a lot of recognition for his performances with Brentford in the Championship. There has been a lot of interest shown in him so we are very pleased that he has decided to join us.

“We have been looking to bring in players who are hungry and determined to progress and get better. Saïd is an exciting talent with a lot of ability and the right qualities, who will complement the other attacking players we have at the Club.

“We need to give Saïd some time to settle in, but the step up to the Premier League is one I am confident he will be able to make. We are really pleased to have him here and looking forward to getting the best out of him.”

Benrahma completed his medical at Spire London East Hospital, although he will not be available for Sunday’s trip to Tottenham Hotspur due to his registration being finalised after 12pm on Friday. 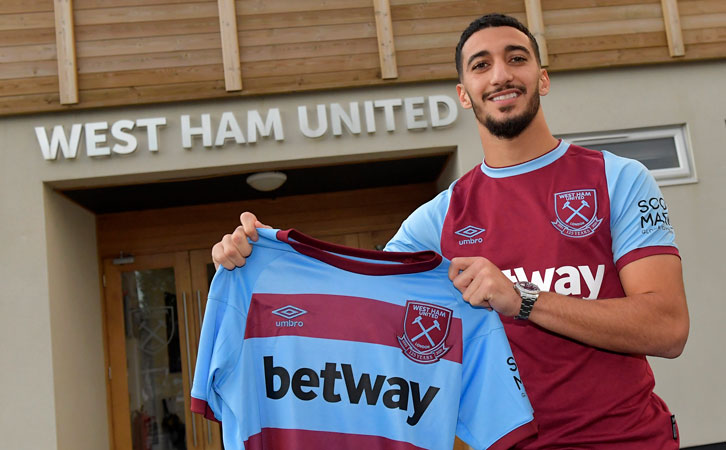 Born in the city of Aïn Témouchent in northern Algeria, close to the country’s Mediterranean Sea coast, Benrahma moved to southern France as a teenager, joining Toulouse-based Balma SC – a club that West Ham defender Issa Diop also represented as a youngster.

After a season with renowned youth development club Balma and two with another Toulouse area side, US Colomiers, the young winger attracted the attention of some of France’s leading clubs, including Monaco, before opting to join OGC Nice, who had just finished fourth in Ligue 1, in the summer of 2013. It did not take long for the 18-year-old to make an impact, as he made his debut in a Ligue 1 fixture with Toulouse in October of the same year.

A first senior goal arrived in April 2015 in the shape of a Ligue 1 winner against Reims, before Benrahma was loaned to Angers SCO, GFC Ajaccio and LB Châteauroux to gain valuable first-team experience. It was with Châteauroux in 2017/18 that he began to fulfil his outstanding potential, scoring ten goals and assisting five more for the newly-promoted Ligue 2 side.

Having been spotted by Brentford’s French scout Brendan MacFarlane, Benrahma moved to London in summer 2018, following a path trodden by Neal Maupay, who has since gone on to enjoy Premier League success with Brighton & Hove Albion.

Saïd is an exciting talent with a lot of ability and the right qualities, who will complement the other attacking players we have at the Club

Benrahma was virtually unstoppable in a Bees shirt, scoring eleven goals, assisting 17 more and winning the club’s Goal of the Season award for an outstanding strike against Hull City in February 2019.
Last season, he was arguably even more influential, leading Brentford to the Championship Play-Off final with 17 goals and ten assists. He kicked-off 2020/21 with two fine goals in a Carabao Cup win over the Bees’ Play-Off final conquerors Fulham.

Capped five times by Algeria, Benrahma debuted for his country against Senegal in 2015 and has recently returned to international action, starting a 1-0 friendly win over Nigeria earlier this month and appearing as substitute in a 2-2 draw with Mexico this week.

Everyone at West Ham United would like to welcome Saïd and his family to London Stadium and wish him every success for his career in Claret and Blue.