Dmitri Halajko: Under-23s are looking forward to their first home game of the season 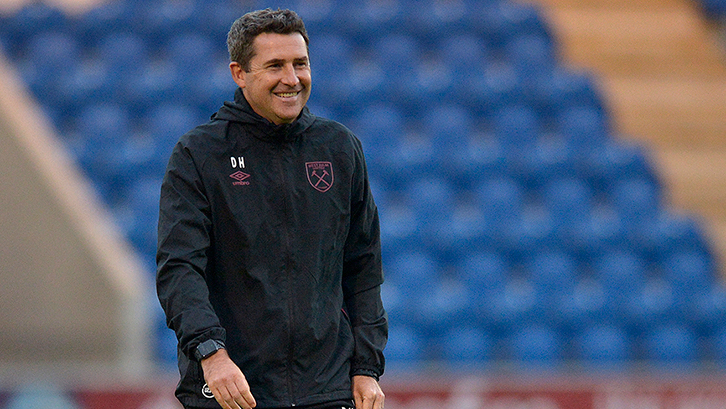 After witnessing his development squad all but secure qualification from the EFL Trophy group stages on Tuesday night, lead coach Dmitri Halajko wants to see his side transfer their cup form into Premier League 2.

The young Hammers have struggled to replicate those performances in the league thus far, however; profligate finishing cost them in losses at Chelsea and Tottenham, before they showed admirable fighting spirit to claim a late 2-2 draw at Southampton last week.

Now, as the Under-23s prepare for their first home game of the season – having played all five away thus far – Halajko wants to see his side to embrace the challenge of collecting their first three points of the season at their new home, Rush Green Stadium.

“I think the lads are all looking forward to playing at Rush Green,” he told whufc.com.

“It’s a lovely surface and it’s a lovely pitch, which hopefully means we’ll be able to get the ball down and pass it really nicely and get it moving.

“I think the main thing they’ll be looking forward to is playing on that pitch, because we know that it will allow us to play good football. We’ll try our best to do that.”

At that time, the Seagulls – led by head coach Simon Rusk – were performing well in Premier League 2 Division 1, and they have continued to do so in their opening matches this season.

They certainly play a nice style of football in possession, so it’s a tough game in the league. We know they’ve done quite well in their first few games

Draws for Brighton against Tottenham and Arsenal preceded a stunning 2-0 victory over Chelsea on the south coast – the reigning champions’ first league loss in over a year.

With that result in mind, Halajko anticipates a tough test against a top-level team on Saturday afternoon – but knows how valuable a first victory in the league could prove ahead of the upcoming international break.

He explained: “Brighton are a good team so it will always be a tough one. They’re really hard to break down.

“They certainly play a nice style of football in possession, so it’s a tough game in the league. We know they’ve done quite well in their first few games.

“We need to get our first win in the league and we’ll try to do that if we can.”

West Ham United Under-23s take on Brighton & Hove Albion Under-23s on Saturday 3 October in a behind-closed-doors fixture. Kick-off is at 3pm; you can follow all the action with our live blog on whufc.com from 2.30pm.