The occasion and the magnitude of Sunday’s clash with Reading will not be lost on Maz Pacheco.

The full-back, a former Reading player, will line up against her former side this weekend as West Ham United prepare to welcome the Royals to Dagenham & Redbridge Stadium in the Barclays FA Women’s Super League.

After two years in Kelly Chambers’ team, Pacheco is looking forward to seeing some friendly faces on Sunday and thinks this weekend’s match will provide an opportunity for the Irons to show their quality against her old side.

Historically, I feel like West Ham and Reading has that derby feel to it, and the matches between the two have always had real significance. I think that will carry through to both sets of players.

“I’m looking forward to it,” the 22-year-old told whufc.com. “In the past, when I was at Reading and we played West Ham, it always felt like a big game and I’m sure it’ll be the same on Sunday.

“I think, for the neutral, it will be a quality game to watch. Both teams have a lot of new players so it will almost be two new teams playing each other.

“Historically, I feel like West Ham and Reading has that derby feel to it, and the matches between the two have always had real significance. I think that will carry through to both sets of players.

“I learned a lot during my time with Reading. I’m really grateful they brought me in, and they taught me so much in terms of tactics and also what I need to grow as a player. It’ll be good to see some familiar faces on Sunday.”

Pacheco joined the Irons at the start of July and has been relishing life in Claret and Blue so far.

The defender is feeling settled in east London, after reuniting with the manager who gave her a professional debut at Liverpool in Matt Beard.

She continued: “I’m really enjoying it here. I feel like I’ve really settled in. It’s been so easy, from the moment I walked in for the first time until now. Even when we were on Phase One of the return to training, and we were only in groups of four or five, I felt I was with some really good people.

“From there, it built up into the full team training and, honestly, it feels like I’ve been here for years. It’s been a really easy transition and I guess that’s credit to the players already here and the staff here too.”

The pilot event, in West Ham’s first home match at Dagenham & Redbridge Stadium, saw Irons fans return to watch their team play against Arsenal three weeks ago, and Pacheco was thrilled to experience the roar of the Claret and Blue Army for the first time.

The defender is looking forward to experiencing more of it, when it is safe to do so.

“West Ham feels like a real family club that is built for the fans, and I love that,” Pacheco added. “That’s the kind of atmosphere I thrive on. Although the stadium wasn’t full, because of the guidelines, they made so much noise it felt like it almost was.

“I can’t wait until everyone is back and we can have a full house, and for my mum to experience it too. They’ve really made me feel a part of the West Ham family and I’m really, really grateful for that.”

Containing an in-depth interview with the full-back on her move to the Hammers, the programme also features a preview with France midfielder Kenza Dali, a sit-down with summer signing Ruby Grant, and a reflection on how our Irons performed on international duty!

Issue Two of the 2020/21 West Ham United women’s Official Matchday Programme will be available digitally on whufc.com from Saturday evening, and can be purchased online through Ignition Sports Media here! 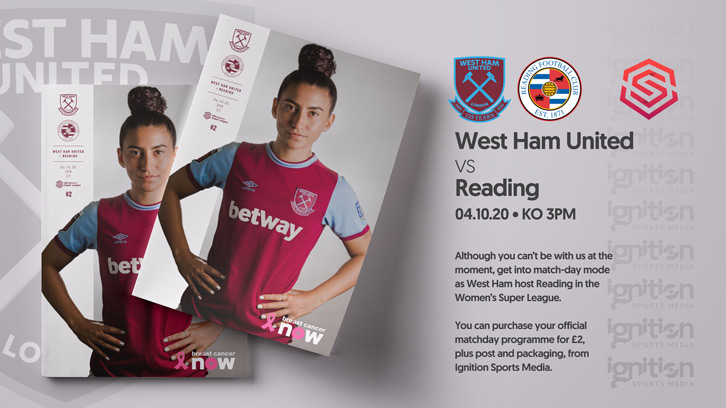