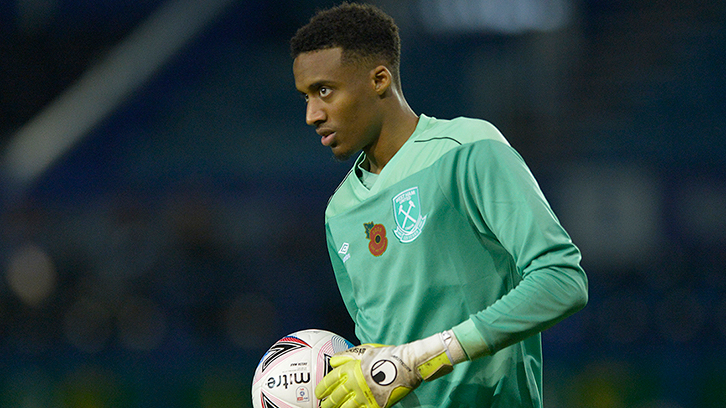 Academy goalkeeper Nathan Trott believes West Ham United Under-23s can take confidence from their form and fight in the Papa John’s Trophy as they bid to end their winless league run.

The Hammers have yet to clinch three points in Premier League 2 so far this season, despite putting in a number of strong performances which arguably warranted better.

Such results have come in contrast to those the development squad have attained against senior Football League opposition in the Papa John’s Trophy.

3-1, 1-0 and 1-0 wins against Southend United, Colchester United and Portsmouth respectively helped the young Irons to top their group and tee up a second-round match against Peterborough United.

The latter of those results – the Irons’ impressive win over Pompey at Fratton Park – saw Trott make his first appearance in West Ham United colours in two seasons, having spent 2019/20 on loan at League One club AFC Wimbledon.

Buoyed by that experience, Trott was impressed with the quality of the performances his development squad teammates delivered on the south coast, with many of them promoted from youth team level for the fixture.

Should they maintain such standards, Trott feels that West Ham’s U23s have a good chance of collecting three Premier League 2 points when they travel to Leicester City’s King Power Stadium on Monday evening.

“I think they can be really positive having had that result against Portsmouth,” Trott told whufc.com. “Travelling to Fratton Park is never easy.

“The boys played really well there. It was a solid performance against a top League One side, and to top it off with a clean sheet was really good as well.

“If they can compete with teams like that, near the top of the table in a professional league, then they know they can take the form and fight which they had there and put it to use in Premier League 2. Hopefully the results will come from there.

“We’ve a young team at the moment. I’ve played in a lot of U23s teams before and this is probably one of the youngest ones, but the players showed during the Portsmouth game that they can play at a high level. Everyone dug deep to get a result out of it.”

Trott’s return to Fratton Park yielded a strong performance, a clean sheet – and happier memories than those of the defeat he suffered as part of the Dons’ visiting party in January.

The 22-year-old, who was also called up by England U21s for the first time last season, has since returned to the Club and has trained with West Ham’s first-team group in recent months.

Pleased to turn out for the Irons once more, Trott is now looking to advance his development by continuing to work as hard as he can and impress at every opportunity.

He observed: “After coming back from loan, it was good for me to get out there and get 90 minutes under my belt because it’s been a long time coming really.

“Playing in League One, then coming back into a Papa John’s Trophy game for West Ham, I think my experience meant I was a lot more used to it than the other boys. It was good to help them out.

“I’ve been training with the first-team group for a while now. I want to get games in and maybe at some stage look to get a loan move to get game time.

“For now, though, my focus is just on training as hard as I can and doing as well as I can with the U23s.”

West Ham United Under-23s take on Leicester Under-23s on Monday 23 November in a behind-closed-doors fixture. Kick-off is at 7pm; you can follow all the action with our live blog on whufc.com from 6.30pm.