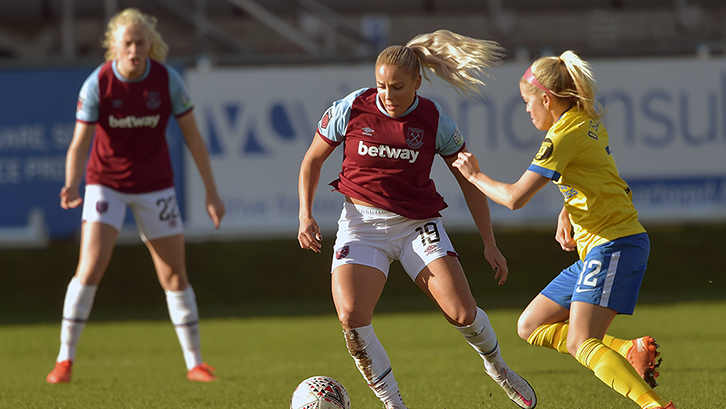 West Ham United were unable to break down a stubborn Brighton & Hove Albion side at the Chigwell Construction Stadium as they slipped to a 1-0 defeat in Women's Super League on Sunday afternoon.

Despite creating plenty of opportunities with some pacy attacking play, the Irons could not make the good positions they had assumed count, coming up against a Seagulls' shot-stopper, Cecilie Fiskerstand, in resolute form.

The game was ultimately settled, against the run of play, by Rianna Jarrett's second-half finish.

Seeking a third consecutive win in all competitions, West Ham manager Matt Beard named a completely unchanged matchday squad to that which came from behind to best Birmingham the week before.

The Hammers had travelled to Brighton just a month ago for a Continental League Cup group stage clash which ended 2-2 – and 5-4 on penalties in West Ham’s favour.

But it was Brighton who enjoyed the first shot of the game, Jarrett winning the ball high up the pitch and subsequently turning and firing wide from 25 yards.

The visitors had another chance to strike at goal when Kayleigh Green played the ball across the penalty area, but Aileen Whelan’s wasn’t the cleanest of connections and Mackenzie Arnold did well to shift her feet and catch it.

West Ham’s first shooting chance of the match came after ten minutes, Rachel Daly playing a ball over the top for Martha Thomas to run onto out wide.

The No9 did well to pick out Emily van Egmond with an accurate cross, which the midfielder in turn laid off to Alisha Lehmann. However, the Swiss forward’s quick strike was well closed down.

Van Egmond was out for her second goal in the space of seven days, having nodded the winner against the Blues, and almost got it with a fierce rising shot from the edge of the area which rippled the side-netting.

The first clear chance of the match came after a quarter-of-an-hour when Thomas sprinted onto a long ball over the top. Clean through on goal, the Scotland international opted for a powerful volley, but Brighton ‘keeper Fiskerstrand did well to smother it.

West Ham were growing into the contest and, but for a matter of inches, could have led after 25 minutes. England international Daly showed all her class with an impressive turn and delivery from the right which flashed just over Thomas’ head with the goal gaping.

Shortly before half-time, Thomas had another excellent opportunity to open her Women’s Super League account for the season. Katerina Svitkova picked off a loose pass in midfield, drove forwards and played in the striker on the overlap, but Thomas’ shot across goal – well struck – whistled past the far post.

Brighton countered and could have taken the lead from Green’s fine cross in from the left, but with plenty of West Ham bodies sprinting back and making their presence known, Gilly Flaherty was able to scramble clear as the visitors appealed for a penalty.

The chances continued to flow at the start of the second half when Arnold played an excellent long pass into the path of Leon. The Canadian forward stood up her marker and played a one-two with Thomas, but was crowded out as she ran onto the return in the area.

Arnold’s reflexes were soon after called into action as a Brighton corner almost sailed over her head, but the Matildas shot-stopper adjusted well to lean back and tip it over the bar.

West Ham continued to persevere, with Leon the next player to go close with a curling effort from the edge of the area, fractions too high.

Lehmann then had an excellent opportunity to open the scoring, having started the move herself with a fine run to carry the ball from deep. The No7 slipped in Thomas before racing onto the pull-back but, having had to spin to make room for the strike, her clipped shot flew just past the upright.

Then, out of nothing, Brighton’s breakthrough against the run of play: a pass over the defence found Jarrett in behind, having managed to lob Arnold, she successfully scrambled the ball over the line under pressure from Flaherty.

Were it not for a fine save from Arnold, the Seagulls would have doubled that lead moments later. Green’s cross took a deflection and found Inessa Kargmaan at the far post, whose side-footed volley looked destined for the bottom corner, but Arnold produced an excellent save low down to her right to turn it away.

The game was open and Thomas came close to equalising moments later. After executing a brilliant flick to make space on the right flank, the No9 drove into the area and fired another crisp low strike across the face of goal.

There was still time for West Ham summer signing Hawa Cissoko to make her debut with ten minutes remaining, but despite continuing to fashion plenty of space down the flanks, the Irons' final passes all too often reached Fiskerstrand ahead of a Claret and Blue shirt.

West Ham won a corner in the dying embers, with the delivery taking a deflection on the way to Flaherty at the far post. The captain did well to adjust her feet to meet the bouncing ball, but couldn't keep her shot down, and the points were destined for Brighton on a frustrating day for Matt Beard's side, who deserved more from the game.