The defender has played in the Hammers’ two wins in the last ten days, helping the Irons to a 3-0 home victory against Reading before a 2-1 away Barclays FA Women’s Super League victory at Birmingham City on Sunday.

The results give West Ham maximum points from their pair of matches in November so far and, although the beginning of the campaign had been a struggle for Matt Beard’s side, Vetterlein feels there are positives to take from each fixture.

The German says the team needed to rely on different qualities in the last two games, and a combination of the two will help West Ham to another win this weekend.

We showed against Reading last week that we have the quality to take our chances and beat teams, and we showed a lot of resilience to beat Birmingham City too. We need to keep our good form going now.

“I think there have been positives in every game we’ve played,” Vetterlein told whufc.com. “We were unlucky at times, because I think we’ve played good football, but the problem was we couldn’t score from the chances we’d created or find the consistency we needed over 90 minutes. That can kill you in games and, in this league, any mistakes are punished.

“We have to focus on ourselves and stay positive. We showed against Reading last week that we have the quality to take our chances and beat teams, and we showed a lot of resilience to beat Birmingham City too. We need to keep our good form going now.

West Ham United face Brighton & Hove Albion in the Barclays FA Women's Super League on Sunday 15 November at 12:30pm, live on the FA Player. For more information on how to use the FA Player, click here to download our helpful 'how to' guide!

“There’s a good mix, in this squad, of experienced players and talented, young players who are willing to learn. For us now, it’s about linking that together on the pitch. We will see that continue to improve and progress over the season, and it will help us to only get better on the pitch and achieve success.”

A first league win of the campaign last time out has West Ham looking up the table, but Vetterlein does not want to get bogged down in the mathematics of the league standings, preferring to focus on each match as they present themselves.

The experienced defender knows that the very best performances from her and her teammates will result in even more victories to celebrate in the coming weeks.

She added: “I’m not a big fan of looking at table positions or coming up with points targets, because there are so many other influences and variables that can make that up. I just want to focus on each game as it comes.

“If we play our best football, the wins will come. And I’m really convinced that, when we’re all at 100 per cent, we will win more games than we don’t.”

Containing an in-depth feature with the centre-back on how football is a part of every aspect of her life, this programme also features an intervew with Czech Republic international Katerina Svitkova, a look at the West Ham United women's Supporters' Board, and Canadian international Adriana Leon explains how ice-hockey legend Wayne Gretzky influenced her career.

Issue Five of the 2020/21 West Ham United women’s Official Matchday Programme will be available digitally on whufc.com from Saturday, and can be purchased online through Ignition Sports Media here for just £2 plus postage and packaging! 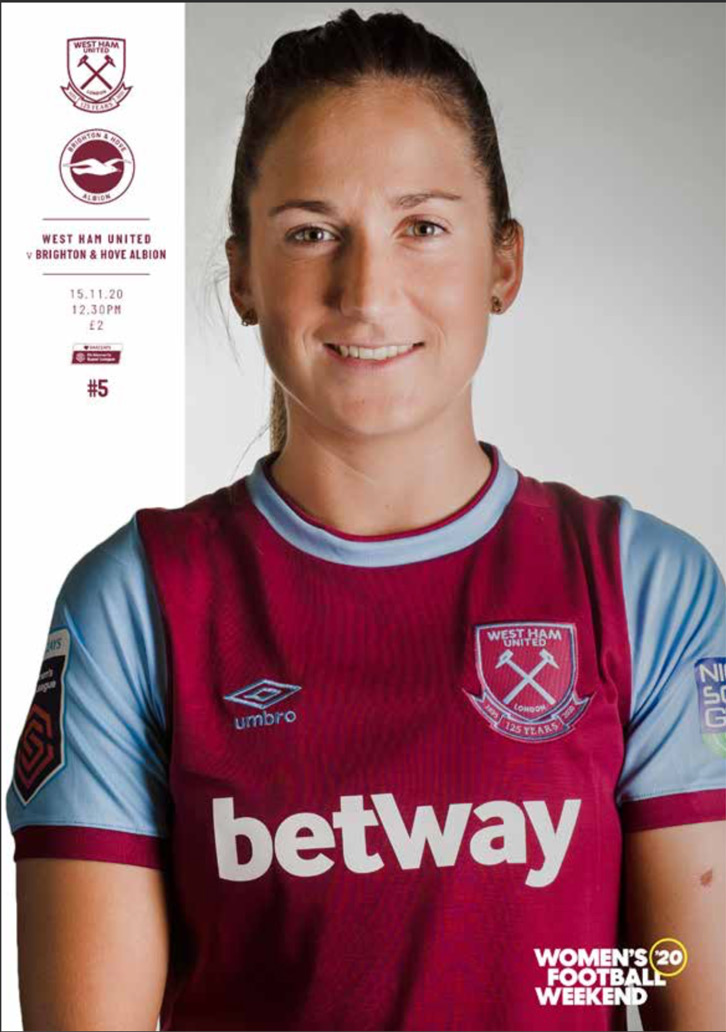