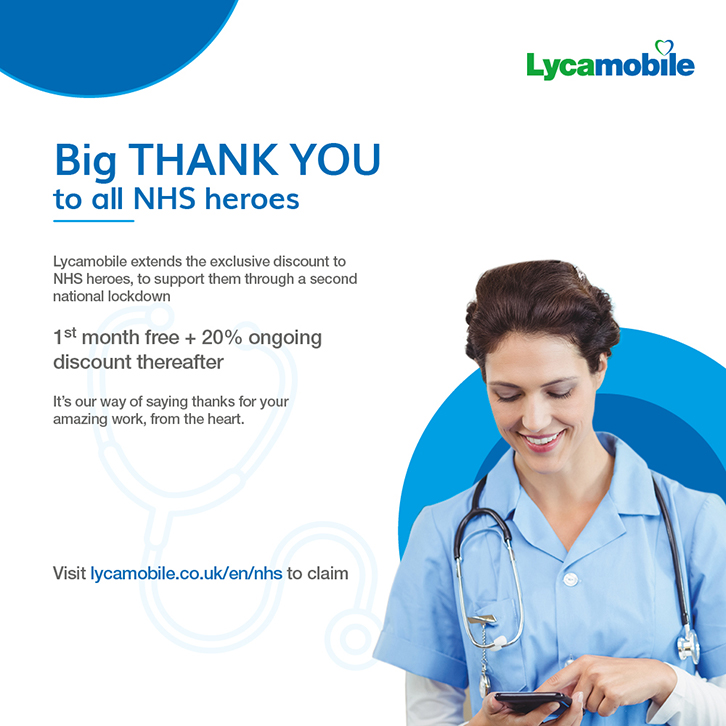 Following the announcement of a second national lockdown, West Ham United's Official Mobile Phone Partner Lycamobile has extended its NHS discount period to say thank you for everything NHS workers have done.

The extension grants NHS workers a free month of its International Unlimited plan and an ongoing 20% discount on the plan thereafter. The plan includes unlimited data, UK minutes and texts, as well as unlimited international minutes to over 40 countries.

NHS staff will have until 31 January 2021 to claim their free month, and will receive the 20% discount on every month as long as they have auto renewal enabled.

The NHS has been a source of national pride throughout this pandemic, with staff putting forward a heroic effort to save lives and help stem the spread of the virus, and Lycamobile wants to ensure they can stay connected with friends and families across the country and internationally.

Originally launched as part of a Government initiative and according to the latest Government figures, Lycamobile’s NHS discount played a key role in helping nearly half-a-million key workers stay connected with their loved ones, wherever they are in the world.

Allirajah Subaskaran, Chairman and Founder of Lycamobile said: “NHS staff spent countless hours assisting our country through this pandemic and have been instrumental in protecting us and our loved ones during these difficult times. Extending our offer is our way of saying thank you and showing gratitude for their heroic work.”

West Ham United initially teamed up with the east London-based mobile virtual network operator in 2012. Since then, Lycamobile have worked closely with the West Ham United Foundation to provide opportunities to thousands of young people, most notably with the launch of the annual Lycamobile Cup, which has allowed local schoolchildren to play in the shadow of London Stadium on the London Marathon Community Pitch.