Putting pen-to-paper on his 17th birthday on Wednesday, Baptiste’s two-and-a-half year deal arrives at the culmination of an impressive period of progression for the starlet.

Having become West Ham’s second youngest-ever U23s player last season, Baptiste made a further nine appearances at that level over 2019/20. He has already played a further eight games for the U23s so far this campaign.

The centre-back also travelled to the first-team’s summer training camp in Scotland, where he impressed manager David Moyes enough to earn a full 90-minute appearance in the 5-1 pre-season win over Wycombe Wanderers at Adams Park.

A regular for England at youth international level, Baptiste was also called up to England U18s for the first time earlier this season, where he participated in a training camp.

I joined West Ham at eight and I’ve had a really good time since. The big thing I’ve learned is just to always work hard... and always to speak to the coaches and players around me

Having developed at the Academy of Football since he was just eight-years-old, Baptiste was delighted to sign his first professional deal at West Ham.

“I’m over the moon,” Baptiste beamed. “I’ve been waiting for this for a very long time, and the day has come.

“I joined West Ham at eight and I’ve had a really good time since. The big thing I’ve learned is just to always work hard, no matter whether I’m doing well or not doing well, and always to speak to the coaches and players around me to help my career.

“When I was younger, I wasn’t one the best player in my eyes, but then I started working harder. I got an opportunity and I feel like I took it, and ever since U15s I’ve been with the U18s, which brings pressure, but I think I’ve dealt with it well.

“A big inspiration has been Declan Rice. He’s always told me just to enjoy it and to always work hard and remember why you’re there. He was in my shoes around this time in his career, and look where he is now.“ 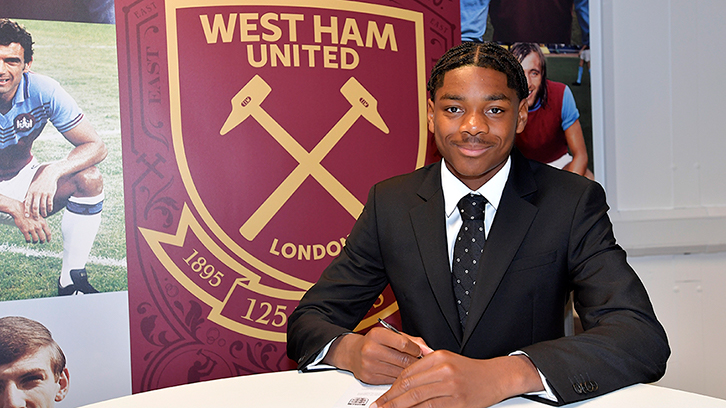 Academy Manager Ricky Martin added: “This is a great day for Jamal. His first professional contract is great news for him and also great news for the Academy.

“I’d like to thank everyone who has played their part in helping Jamal to get to this stage in his development.

“Jamal is one of the youngest players to play regularly for our U23s, and he’s representing his country, so of course his profile is good, but at the moment he’s still in the development stages.

“He’s met the manager and he has put that message across to Jamal and his family. It’s very much one step on the ladder, but he’s got many more steps to take.

"Jamal knows that, we know that, and we’re here as an Academy to help our young players to develop.” 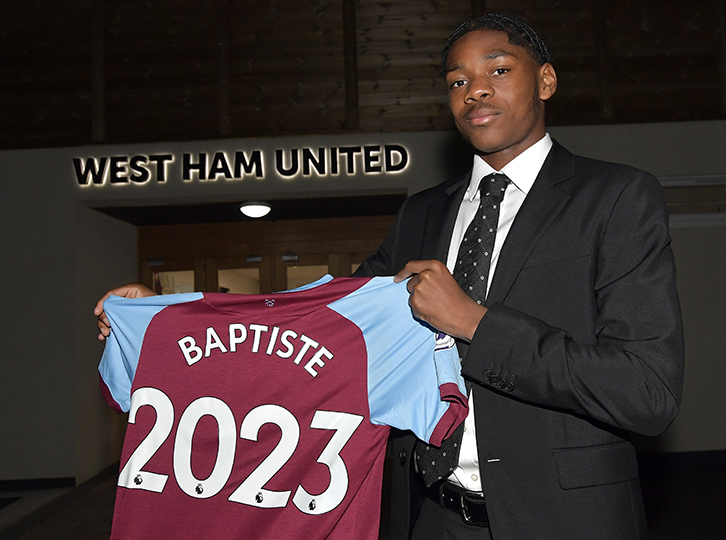 At such a young age, Baptiste understands that self-development remains his priority, and is grateful for all those at the Academy of Football who have helped him progress to this point– family, friends and coaches alike.

He explained: “Ricky [Martin] has helped me a lot, pushing me on with the first team.

“In terms of coaches, individually, [U23s coaches] Dmitri [Halajko] and Steve [Potts] have helped me. A big one was Kevin [Keen]; I’ve learned a lot from him while he’s been at the Academy.

“The work my family has put in has been really hard as well; the driving they’ve done all around the country, travelling with me, without me, and just supporting me all the way.

"I’d like to thank my friends who have supported me, my family, and my psychologist at the Club, Lori, who has helped me a lot.

“West Ham is all I know. It’s all I want, to be fair. I’m just over the moon. You couldn’t ask for anything more.”