Nor: We have a great chance to qualify from our Conti Cup group

Nor Mustafa knows Wednesday’s match against Reading represents a fantastic opportunity for West Ham United on a number of fronts.

The Hammers go into the midweek Group D Continental League Cup clash looking to secure a first three points of the campaign.

Victory over the Royals on Wednesday would put Matt Beard’s side in a fantastic position to finish top of their group and secure their place in the Continental League Cup quarter-finals.

Nor recognised that the team have endured a difficult start to the campaign but says the midweek match is a great chance to turn things around.

We are really positive, and I have no doubt we will get wins together really soon and turn it around.

The 18-year-old noted: “We’ve had a rough start to the season, but we have a really good plan and, more importantly, we are all standing together and we all back each other. We are really positive, and I have no doubt we will get wins together really soon and turn it around.

“We’re going into this match against Reading with every determination to win the game. We are going to give absolutely 100 per cent and we all believe we have a great chance to get out of the group and go the whole way in the competition.

“We have a really good group of players here, and I truly believe we can do it.”

Nor has made four appearances in all competitions this season since joining West Ham in the summer, and the striker is adapting to life in east London well.

The forward is getting used to the speed and physicality of the Barclays FA Women’s Super League and hopes to continue to improve as the season progresses.

She added: “I think I am settling in really well. I am very happy here at West Ham. All of my teammates and all of the staff here have been very welcoming since my first day.

“There is a big difference between the Swedish leagues and English football. Here, it is much more physical, more demanding, and a much quicker tempo. But I’m a physical player, so that part really hasn’t fazed me too much. I enjoy that part of the game and I’m used to it.

“I’m used to the physical challenge and it’s fun to try myself out in England. When a defender wants to try and challenge me, I look forward to standing up against them and having that battle.”

Nor Mustafa is the cover-star for Issue Four of the 2020/21 West Ham United women’s Official Matchday Programme, powered by Vision Consulting.

Containing an in-depth feature with the forward on adapting to live in east London, this programme also features a preview with Ireland international goalkeeper Courtney Brosnan, an interview with Hawa Cissoko, and a look at Academy youngster Angie Dunbar-Bonnie!

Issue Four of the 2020/21 West Ham United women’s Official Matchday Programme will be available digitally on whufc.com from Tuesday afternoon, and can be purchased online through Ignition Sports Media here! 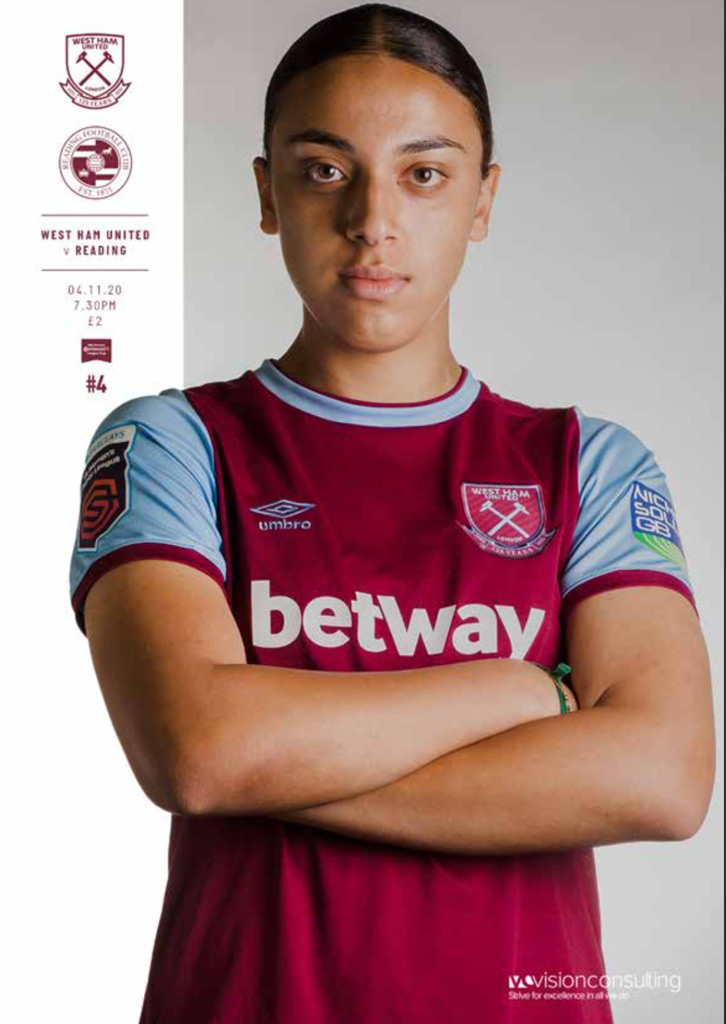