'The noise when it went in almost took the roof off the place!' - Matty Etherington recalls West Ham's unforgettable 2004 Play-Off semi-final victory

While the 2003/04 season ultimately ended in the disappointment of a Play-Off final defeat, the game which preceded it is among the most popular in recent West Ham United history.

Both clubs were desperate to regain their Premier League status after being relegated in 2002 and 2003 respectively – Ipswich just a season after finishing fifth and West Ham with a record-high 42 points.

The first leg at Portman Road went the way of the Tractor Boys, with striker Marcus Bent scoring the only goal of the game after 57 minutes, meaning West Ham needed to win by two clear goals to secure a place in the final at Cardiff’s Millennium Stadium. There, the winners would face Crystal Palace, who had already beaten Sunderland on penalties.

With that incentive and Pardew’s rousing team talk in their minds, West Ham produced a superb second-leg performance amid an unforgettable atmosphere at the Boleyn Ground.

The atmosphere was the best I ever played in at Upton Park and the noise when it went in almost took the roof off the place!

A capacity 34,000 crowd roared the Irons forward, but they would have to wait until after half-time to have their support rewarded, with Steve Lomas hitting the crossbar and Bobby Zamora being denied by Kelvin Davis during a frustrating opening 45 minutes.

Five minutes after the break, however, it was Matty Etherington who broke the deadlock with a sensational strike that continues to feature every time a video is produced featuring ‘West Ham’s greatest goals’.

The popular winger, who had been voted Hammer of the Year, collected a short corner from Michael Carrick, cut inside and launched a rising, unstoppable shot into the far top corner. The Boleyn Ground erupted under its famous floodlights, as much in relief as celebration. West Ham were level.

“Scoring against Ipswich Town in the Division One Play-Off semi-final in May 2004 was simply sensational,” Etherington recalled. “The atmosphere was the best I ever played in at Upton Park and the noise when it went in almost took the roof off the place!

“I just knew it was in as soon as it left my foot. I got a bit carried away in the celebrations, taking my top off and showing everyone my baggy vest! 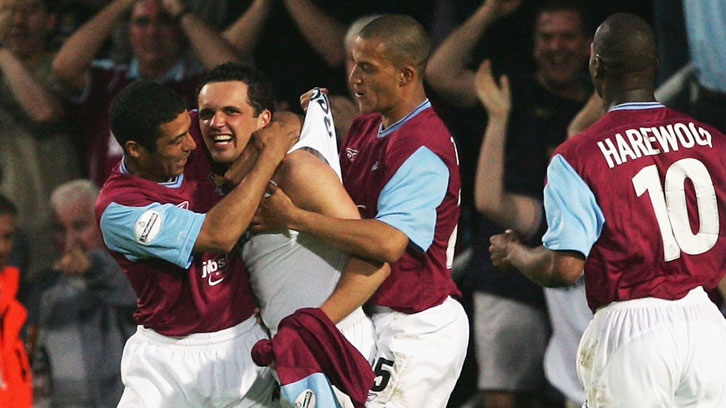 With 19 minutes to go, the turnaround was complete. Another corner, this time a more traditional delivery, hit Ipswich’s Richard Naylor and bounced off Christian Dailly’s midriff before the Scotland international recovered to poke the ball into the bottom corner. Cue more wild celebrations.

West Ham were given a scare in the final minute, when Ian Westlake hit the post, but survived to win through to the final.

There, Crystal Palace sadly stole a 1-0 win, and West Ham would have to wait another year to win the promotion they craved, but that Tuesday night in Upton Park is one neither Etherington, nor any Hammer who was present, will ever forget.

“It did tinge it a bit as we didn’t win the final against Crystal Palace, but that night and the feeling I got from scoring that goal, I can only compare to scoring at Wembley [in the 2011 FA Cup semi-finals for Stoke City against Bolton Wanderers],” he confirmed. “It was unbelievable!”