We continue the #50GreatestMatches countdown today by looking back at one of the most dramatic derbies played at the Boleyn Ground... 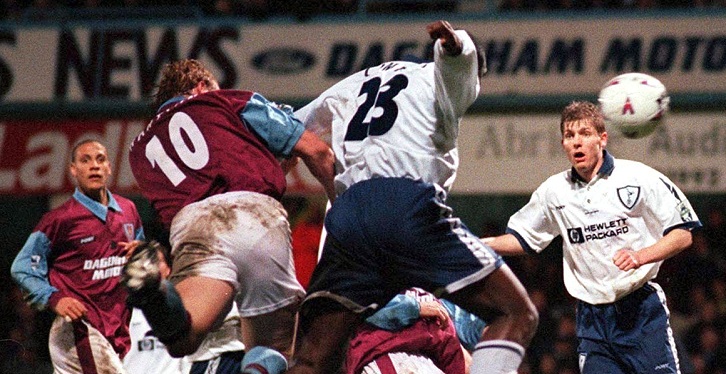 West Ham United were not in a good place when rivals Tottenham Hotspur paid a visit to the Boleyn Ground for a Monday Night Football derby on 24 February 1997.

The Hammers had lost their previous five matches, four in the league and an embarrassing 1-0 home FA Cup third-round replay defeat by Second Division Wrexham.

Indeed, Harry Redknapp’s side were on an eight-match winless run stretching back to a 2-0 home league victory over Sunderland on 28 December 1996.

That unwanted record had left West Ham sat in 18th position in the 20-team FA Carling Premiership table and in grave danger of being relegated flight for the first time since being promoted to the new top-flight in 1993.

Drastic action was needed. First, the manager delved into the transfer market, shelling out a combined £7million to bring in strikers John Hartson and Paul Kitson from Arsenal and Newcastle United respectively.

Next, he handed rookie defender Rio Ferdinand, then just 18, a full league debut in a 1-0 defeat at Derby County on 15 February.

Nine days later, Redknapp fielded all three in his starting XI for the first time for the mouth-watering, must-win visit of their local rivals, Spurs.

On a blustery night, the footballing winds would blow one way and then the other during what was an unforgettable London derby. 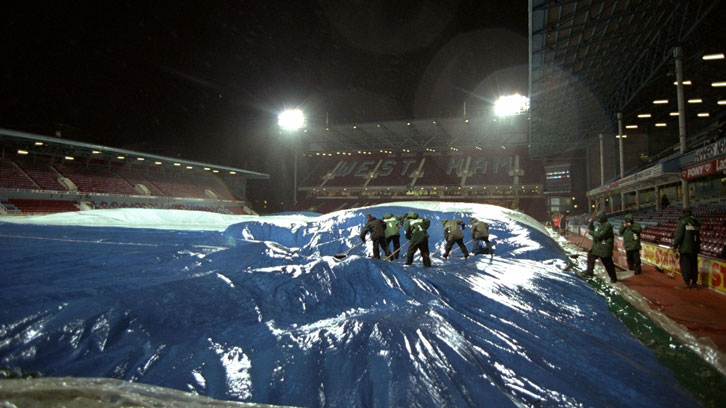 The Boleyn Ground was undergoing a major redevelopment in the mid-1990s, with both ends and the main West Stand being turned into all-seater entities.

While the Centenary Stand had been completed, work was continuing to turn the old North Bank into a 6,000-seater stand, reducing the capacity markedly.

The vast majority of those inside the stadium were rendered silent after just eight minutes when future Hammers striker Teddy Sheringham ran onto Stephen Carr’s right-wing cross to send a long-range header looping past Ludek Miklosko.

Having scored just 20 goals in their first 25 Premiership matches, Redknapp’s strugglers were behind again and staring yet another catastrophic defeat hard in the face. 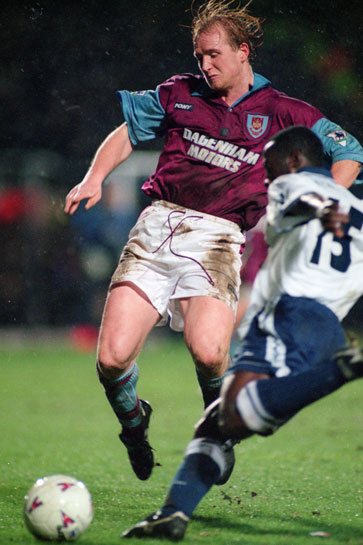 Just past the 20 minute-mark, Michael Hughes sent a corner up into the swirling wind and, when the ball came down, the bald head of Julian Dicks sent it arrowing into the bottom right-hand corner.

Within a minute, Hughes was denied by Ian Walker. From the resulting corner, the Northern Irishman sent another swerving, dipping delivery onto the head of new boy Kitson, who made no mistake from close-range.

The game was not yet half-an-hour old when its fourth goal arrived. Walker’s long clearance was helped on by Sheringham and Steffen Iversen to Anderton, who calmly lobbed Miklosko from 20 yards to make it 2-2.

By half-time, however, West Ham had got their noses in front again! Dicks was the provider this time, curling over a left-wing free-kick for home debutant Hartson to out-muscle Sol Campbell and power his header inside Walker’s far post.

When the two sides emerged back into the swirling gale after half-time, it should have come as a surprise to no West Ham fan that their side would relinquish their lead for a second time.

Eight minutes into the second period, Spurs midfielder David Howells latched onto Dicks’ miss-hit clearance and squeezed a low finish past Miklosko’s left hand and into the corner.

The goal was a poignant moment for Howells, who played despite the death of his father earlier that same day.

For the long-serving Spur, his night would not end there, as Howells brought down Hartson and referee Gary Willard pointed to the penalty spot with 18 minutes remaining.

Dicks stepped up and smashed the resulting spot-kick high into the net to put West Ham 4-3 up and into a lead they would not surrender.

The two new boys and one old warrior had combined to earn the Hammers a hugely valuable three points which lifted them out of the relegation zone.

"We rolled our sleeves up and this win will give us heart," said Redknapp after the final whistle. He was right.

While a 1-0 defeat at Leeds United next time out put West Ham back into the bottom three, the signings of Hartson and Kitson and the emergence of Ferdinand would play a big part in their ultimate survival.

Kitson would score eight goals in 14 appearances, while Hartson added five in eleven. Ferdinand would start eleven times, scoring in a vital 3-1 win at Coventry City in late March.

A haul of 20 points from the final 13 games of the 1996/97 season would see the Hammers end the campaign in 14th place on 42 points, two ahead of relegated Sunderland.