Sebastien Haller: We need to turn performances into points 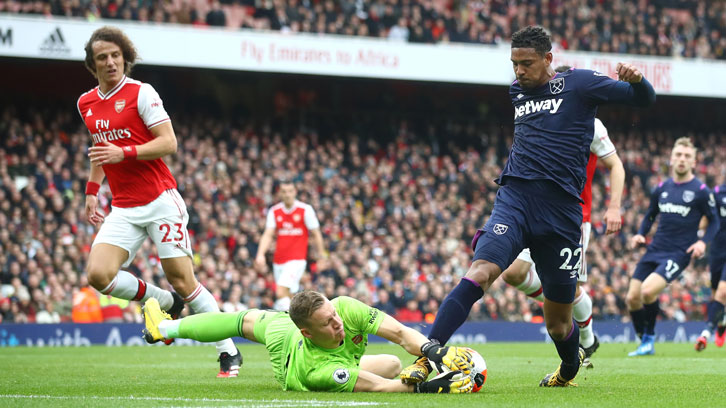 Sebastien Haller admits he and his West Ham United teammates must convert their opportunities if they are to turn improved performances into Premier League points.

The Irons produced a third encouraging display in a row in Saturday’s London derby at Arsenal, only for a succession of missed opportunities and a VAR-awarded Alexandre Lacazette goal to condemn them to a frustrating 1-0 defeat.

Haller admitted he should have taken the chances that fell to him at Emirates Stadium and, while West Ham remain outside the bottom three on goal difference with nine games to play, the centre forward knows the Hammers cannot afford to be as wasteful going forward if they are going to stay up.

Now we are not about playing well, it is just about the points, so even if we play bad, we have to get three points

“That’s the thing – we missed again, again and again, and a goal was given by VAR, which is really frustrating, but we can say nothing because it is our fault.

“We need to get good performances and this is what we’ve done for the last couple of weeks but the thing is, now we are not about playing well, it is just about the points, so even if we play bad, we have to get three points. We need to do it and hopefully we can.”

West Ham have seen a number of VAR decisions go against them this season, with goals for disallowed for handball and goals against awarded, despite the assistant referee initially raising their flag for offside.

On Saturday, Mesut Ozil was flagged off by Sian Massey-Ellis. A review showed he had been played onside by Angelo Ogbonna by a tiny margin, with VAR official Kevin Friend taking at least two minutes to draw the virtual lines on the pitch, before relaying his decision to referee Martin Atkinson.

While the final decision was hugely frustrating, Haller, who also experienced the video review system in Germany’s Bundesliga with Eintracht Frankfurt last season, admitted he could not criticise the time taken to make it, considering the circumstances.

“It’s different now only because it is now we are talking about the millimetres. That’s it. Before, it was not that accurate, so now it is just to check and it’s taking a longer time and that’s it.”