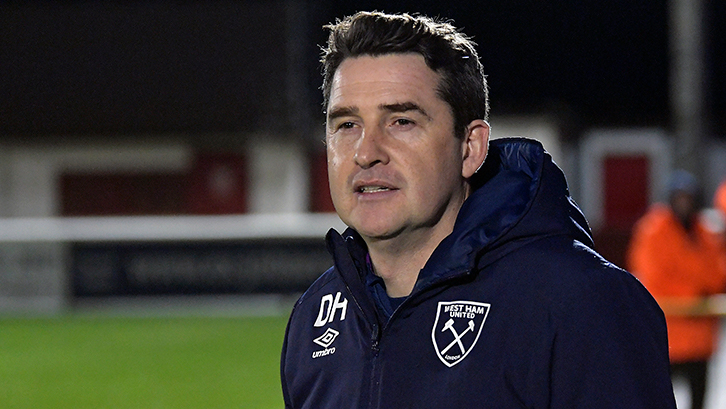 West Ham United U23s Lead Coach Dmitri Halajko has lauded his side for the manner in which they claimed victory against Norwich U23s on Monday evening.

Aware, with the Premier League 2 Division 2 title race approaching its climax, of the importance of three points, the Hammers nevertheless struggled to gain much of a foothold in a combative first half against the Canaries.

Norwich enjoyed the better chances inside the first 45 minutes and, but for some fine saves by West Ham goalkeeper Joseph Anang and an opportunistic goal by Oladapo Afolayan, could have gone into half-time leading.

The players had a few strong words amongst themselves at half-time, which was good to see; they wanted to show a positive reaction in the second half and I think they did

After the interval, however, West Ham looked a team transformed, two stunning finishes from Amadou Diallo and U23s debutant Mipo Odubeko putting them in the box seat.

Xande Silva’s late effort capped an impressive turnaround of fortunes, and Halajko praised his young crop for the mature way in which they took command of their own destiny at half-time.

“It’s that old football cliché: a game of two halves really,” he explained. “First half, we weren’t at our best at all and we were probably lucky to go in at half-time in the lead. We had probably one of our poorer performances. In the second half, far better.

“The players had a few strong words amongst themselves at half-time, which was good to see; they wanted to show a positive reaction in the second half and I think they did.

“We were comfortable, didn’t give up any easy chances as we did in the first half, and then we were clinical whenever we got the chance to be.”

Speaking after the 2-2 draw against Stoke a fortnight ago, Halajko had told of the need for the U23s to be more efficient with their chances if they were to secure crucial victories.

It was therefore hugely pleasing for the development squad's Lead Coach to see four of his attackers make the most of their opportunities on Monday evening.

“I think our front players today converted more than 50 per cent of our chances,” he observed. “You look at Mipo [Odubeko] coming off the bench, he scores with his first touch. In the first half, when we only really got one chance, Dapo [Afolayan] took it.

“When you’ve got four players in good form, even if you’re having a bit of a sticky period in a game, it always gives you a really good chance of winning. That’s what those players are in the team for: goals and assists. We really needed them today.

Halajko made four changes to his starting line-up for the visit of Norwich, welcoming in senior professionals including Fabian Balbuena and Carlos Sanchez, as well as the returning Ben Johnson at the back – all three a huge boon to the Hammers’ developing talents.

“I think you can only really learn off playing alongside professional players,” he noted.

"I think as a young player you can learn more off that when you do sometimes from five, six, seven normal games.

“When you get to play alongside an experienced professional and they’re talking to you, helping you, and passing on their advice to you during the game, I think that’s a massive learning opportunity for our lads.”

The win against Norwich also marked the last Premier League 2 Division 2 game scheduled to take place at the Chigwell Construction Stadium this season, with West Ham U23s’ remaining home games to be played at London Stadium.

With eight wins from eight in all competitions there, 23 goals scored and just two conceded, Halajko has enjoyed his side’s consistency at the home of Dagenham & Redbridge.

“We’ve really enjoyed it here!” he smiled. “It’s been our little fortress.

“I don’t think we’ve conceded many goals here at all, and obviously we’ve won every single game, so it’s been a really good place for us which we’ve enjoyed coming to, and it has felt like home.”

West Ham United U23s’ next game is the Club’s first ever Premier League International Cup quarter-final, away at Derby County’s Pride Park on Tuesday 10 March. Kick-off is at 7pm.