The COVID-19 global pandemic has affected each and every one of us – but nobody more so than the heroes who comprise the National Health Service.

Putting themselves at risk every day throughout the national crisis, these key workers have faced overwhelming pressures in their crucial role on the frontline of the nation’s fightback against the infectious disease.

Following on from Aaron Cresswell’s call with key workers at Queen’s Hospital, and Pablo Zabaleta’s chat with Denis, a patient at Newham University Hospital, Rice was on hand to pass on the enormous gratitude of everybody associated with the Club.

The workers and Rice exchanged questions, Hammers’ anecdotes, and optimism for the future ahead.

“This is a massive boost for all of us. It really means a lot, so thank you from the bottom of my heart,” Rice was told.

“Taking some minutes out of my day, compared to what you guys are doing in there, is nothing,” Rice replied. “For me to come on and chat to you lot, and give you that boost – I don’t mind doing that at all.

“You lot are on the front line, wearing all this stuff… I couldn’t imagine what you lot have been going through to be honest.

“Hopefully when all this is over we can get back to normal. It will take some time, but especially for you guys, I bet it’s going to be a sigh of relief. You’ll deserve a glass of wine or a beer or something!

“Thank you very much, it’s been my privilege.”

The fans and Rice naturally shared a mutual sign-off of “Irons!”, a rallying cry between our players and heroic fans – West Ham, united. 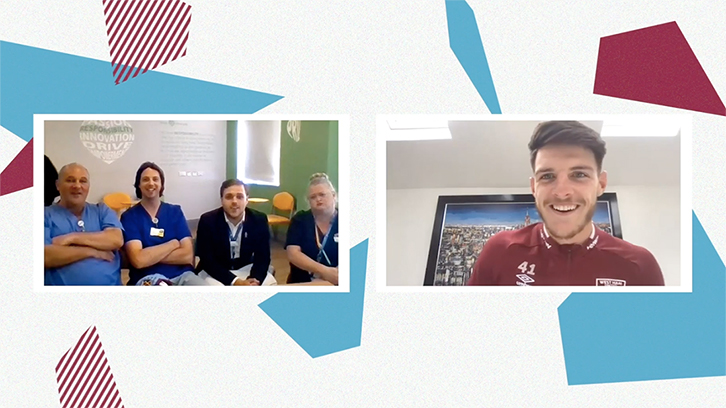 West Ham United’s recent pledge of support for local NHS Trusts across east London and Essex committed the Club to offering a range of dedicated fundraising initiatives, devised in conjunction with NHS experts to inform the Club on how they can best support them in dealing with COVID-19.

In keeping with their recent work with Barts Charity, West Ham have supplied King George and Queen’s Hospitals Charity, who support BHRUT, with 500 replica home and away shirts, for the enjoyment of patients and staff who are fans.

King George and Queen’s Hospital Charity have also received shirts for auction and framed prints for both of the Trusts’ hospitals, signed by the West Ham United first team.

The King George and Queen’s Hospitals Charity is currently running a fundraising appeal focusing on looking after the health and wellbeing of staff at the trust, to ensure they are well-looked after during the pandemic, and beyond.

The Charity has also received incredible donations throughout the pandemic, including over 92,000 meals for hardworking staff, sofas for staff wellbeing rooms, and 22,000 items such as toiletries to go into staff wellbeing and survival packs.

Should you wish to support their urgent appeal, donations can be made here.